Wes Streeting is a Labour MP. He is a Vice Chair (one of 14) of the All-Party Parliamentary Group Against Antisemitism. He has been outspoken against anti-Semitism in the Labour Party and has been described by Jenni Frazer –  a Jewish News journalist – as ‘passionately pro-Israel’.

Strange then that last year he saw nothing wrong with the speech of Wanstead High schoolgirl Leanne Mohamad who accused Israel of deliberately killing “more than 30,000” Palestinian children.

And strange then that more recently Wes was one of the 60 signatories to a CAABU letter full of lies which demonised Israel – such as calling Israel the ‘occupying power’ in Gaza (the truth being that Israel pulled out of Gaza in 2005).  (Wes’ colleague Joan Ryan MP sent an excellent rebuttal).

And even stranger that Wes chaired a Labour Friends of Palestine meeting in a Committee Room in Parliament on Tuesday evening (he replaced Richard Burden MP, a known Israel hater).  This was the group that recently tweeted that the ‘Two State Solution’ will be the ‘final solution’(the tweet has since been deleted and they have apologised). 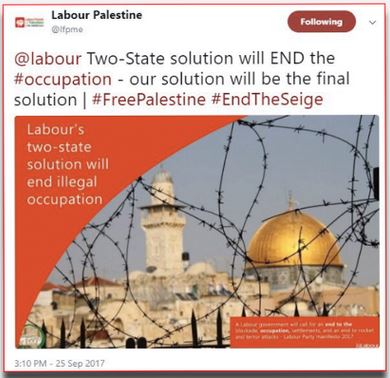 Does Wes really think he can credibly ‘run with the fox and hunt with the hounds’? Even though his constituency is #46 in terms of Muslim population (16.2%).

What happened at the Labour Friends of Palestine meeting on Tuesday evening? Well for a start Wes said “I am unable to visit Gaza” (I’m factchecking that – an MP recently visited, see below).

Then there were the distorted accounts by Aimee Shalan (of Medical Aid for Palestinians) and Dr Phillipa Whitford MP (SNP), a breast cancer specialist recently returned from Gaza. Both criticised Israel for granting insufficient permits for patients to leave Gaza for treatment in East Jerusalem, without mentioning the fact that that Hamas is exploiting very ill cancer patients to smuggle money and information to terrorist operatives.

And Dr Whitford had previously published an article in The Herald which had been full of demonising lies about Israel.

Further, Dr Whitford said at the meeting (of breast cancer sufferers in Gaza) “only 45% of patients are allowed to travel to Jerusalem” for radiotherapy. Later I ‘tweeted’ her to ask for her source for the figure since COGAT does not publish data broken down by medical category. No reply. And her final slide was ‘the map that lies’.

Later, Tony Gratrex asked a question about the treatment of B’Tselem and Breaking The Silence by the Israeli government. Here is a tweet by Gratrex (credit: David Collier). There should be no doubt as to what motivates his anti-Israel animus. 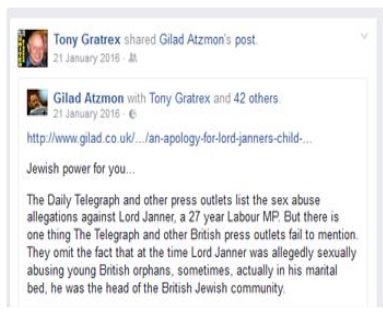 Back to Wes.  In the Q+A Richard Millett asked the first question. I asked the second one. Richard pointed out the one-sidedness of the meeting, which failed to point the finger at Hamas. I pointed out ‘the map that lies’ and said that the fault for drug shortages in Gaza lies with the PA and not Israel (Dr Whitford later agreed that the PA bears part of the blame). I (correctly it seems) cast doubt on her 45% figure. Extraordinarily the next questioner (‘Gary’) accused us of “invading the space“! I responded that Parliament is a public building, to which Wes responded that I was ‘shouting [Gary] down!’  (He clearly didn’t like the fact that we pooped his anti-Israel party). Then he said the meeting was about a humanitarian crisis– not politics – then promptly talked politics! To which I pointed to ‘the map that lies’ – which was still on the screen.  Wes then threatened to throw Richard and me out!  After the meeting he referred to us as ‘two people yelling’, as “yobbish” and as “right wing Jews”.    (Note the heading’s reference to ‘One of Parliament’s most pro-Israel MPs’).

An iron rule of Israel advocacy is that when the haters have no response to what you say, they resort to personal insults. How sad that an MP once thought to have been a strong supporter of the Jewish Community now feels the need to sink to this level…………..