For many people of faith, and religious leaders, Russian religious nationalism, including that espoused by religious leaders, is deeply troubling. It helps fuel Russia’s rationale for decimating Ukraine’s cities and forcing the flight of over ten million Ukrainian refugees, mostly women and children. Today the risks of nuclear accidents, nuclear conflict, and World War Three force us to highlight the dangers of religious militancy and expansionism, which are among the greatest threats to world peace.

Most analysts and many people who care deeply about the conflict have missed the religious dimension fueling the war and galvanizing parts of the Russian population to support it. One big motivation for the ROC in supporting this war has to do with the 2018 split of the Orthodox Church of Ukraine split from the Russian Orthodox Church, leaving the two Slavic Orthodox Churches deeply antagonistic toward each other. Russian Orthodox Patriarch Kirill claims Ukraine as the “canonical territory” of the Moscow Patriarchate. 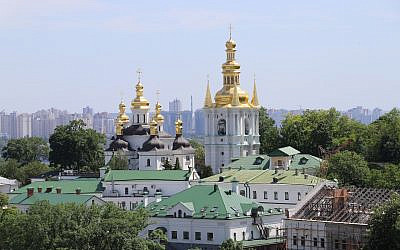 According to AP, the Rev. Cyril Hovorun, professor at University College Stockholm, said that Patriarch Kirill  helped “supply the ideology” which Putin has used to promote Russian hegemony over its neighbors. In return, Putin has strongly supported the ROC. Putin’s closest friend and advisor, and likely the second most powerful man in Russia, Yury Kovalchuk, “subscribes to a worldview” based in part on Russian Orthodox Christian teaching.

It is true that religion has not always been in the service of peace. Many wars were fought over religion, but after the wake-up call of the 20th century, religious leaders around the world have recognized their roles as guardians of human dignity and advocates for peace. How do people of good faith respond when religious institutions and leaders become closely aligned with, or controlled by, an authoritarian, expansionist, and militaristic regime? Global religious leaders have come together to call on the ROC to rethink its approach and play a key role in promoting an end to the war in Ukraine.

Dozens of religious leaders and clergy gathered recently to publicly call for peace in Ukraine, and to encourage Patriarch Kirill to use his position as head of the Russian Orthodox Church for peacemaking. As The Times of Israel reported, the event took place on March 21, at Moscow Square in Jerusalem, outside of the Russian Orthodox Cathedral of the Holy Trinity. Speakers included His Beatitude Latin Patriarch of Jerusalem Pierbattista Pizzaballa, Sheikh Hassan Abu Galion of Rahat, and Druze Sheik Yaakov Salame. 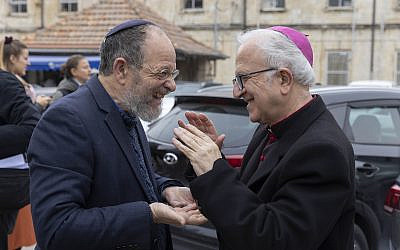 Rabbi Rasson Arousi, representing the Chief Rabbinate of Israel, said “We recite a holy call on behalf of hundreds of millions of believers around the world to stop the killing in Ukraine.” He quoted the Prophet Isaiah, “Nation shall not lift up sword against nation, nor shall they learn war anymore.”

This interfaith gathering follows the delivery of an interfaith letter to Russian Orthodox Patriarch Kirill, calling on him to speak with President Putin to seek peace. The letter was signed 150 Jerusalem and global religious leaders and clergy, including H.E. Cardinal Christoph Schönborn, Sri Sri Ravi Sankar, Dharma Master Hsin Dao, Grand Mufti Mustafa Ceric and Chief Rabbi of Jerusalem emeritus Aryeh Stern. At the gathering in Jerusalem, the letter was taped to the gate of the Russian Orthodox Church. The event was co-organized by The Interfaith Center for Sustainable Development and the Elijah Interfaith Institute.

The prominent religious leaders, representing the world’s major faith traditions, expressed their deep concern with the war and affirmed the key role religious leaders play in promoting peace between Russia and Ukraine. 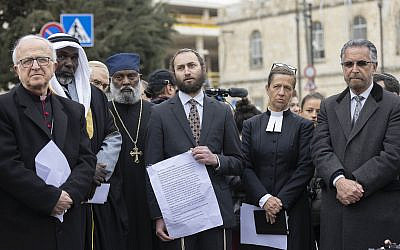 Why were the letter and event important and significant? First, they are an attempt to influence Patriarch Kirill, who has been a staunch supporter of Putin. Would Putin continue the war in Ukraine if the leadership Russian Orthodox Church spoke out against it?

Second, they demonstrate a different way of religion manifesting in the world: religion for peace, instead of religion for war. Third, they show religious leaders and clergy raising their voice against violence and war, and in support of peace. As Rev. Martin Luther King Jr. said, “The ultimate measure of a man is not where he stands in moments of comfort and convenience, but where he stands at times of challenge and controversy.”

At a time when everything hangs in the balance, we must not assume that political and military leaders alone will be able to defuse this crisis. As Putin has put Russia on nuclear alert, human casualties mount and bombs ravage cities and nature, it is a key time for religious figures worldwide to advocate for peace. This is a moment when religious leaders should raise the banner of peace and do everything in their power to promote it.