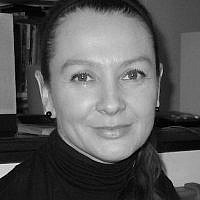 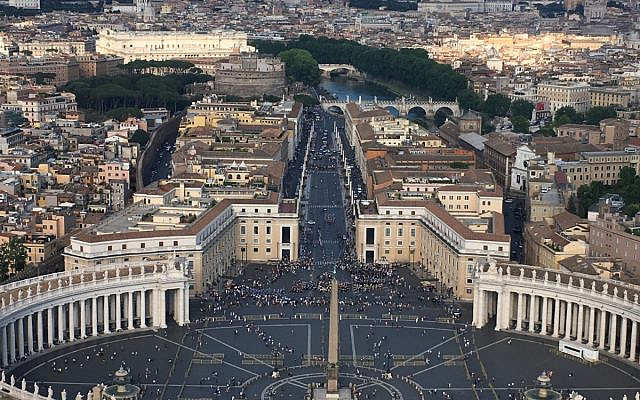 Jewish humor can be found in the Torah and Midrash (interpretation of both written and oral traditions) from the ancient Middle East. However, European Jewish humor in its early stages developed in the Jewish community of the Holy Roman Empire, with theological satire becoming a traditional way of secretly opposing Christianization.

American Scholar Andrea Stoler says, “Many Jewish jokes and anecdotes have made an impact because they are inspired by a profound wisdom. Although the deeper meaning is not always evident at first, one becomes aware of it upon reflection.

Humor is one of the most effective ways of confronting adversity and coping with difficult situations, especially when we have little control over them. It allows one to transcend the circumstance.”

Stoler, also a tour guide in the Vatican Museums, uses her scientific training as a Molecular/Cell biologist to look at things in relationship to one another and Jewish humor to narrate the history of the Jews of Rome in a passionate, creative, and innovative way.

Before taking visitors into the Vatican Museums, she begins in Saint Peter’s Square by sharing an unforgettable old story about the Pope’s lunch and the Jews of Rome.

“So, let’s get some background first” explains Stoler.

“In 1555, the struggle between the Vatican and the Jews of Rome came to a head when Pope Paul IV (1555-1559) issued his bull “Cum nimis absurdum,” which required that the Jews in Rome live within a confined area. With this papal edict, Pope Paul Carafa abolished all the rights of the Jewish community and placed harsh religious and economic restrictions on Jews that lived in the papal states throughout Italy”. The first and most important of his rules forced the Jews of Rome in live in “The Ghetto”, the limited, enclosed, controlled area with gates that were locked at night.  A copy of the document is on display in the Jewish Museum of Rome, says Stoler, and summarizes the following rules concerning the primacy of the Christians:

• All Jews had to live only in one quarter to which there was only one entrance and one exit, and be thoroughly separated from the Christian residences.
• In each and every state, territory and domain where the Jews were living, they could have only one synagogue.
• They had to be recognizable everywhere they went wearing something yellow in color- men usually a hat and women some other evident sign such as a shawl/scarf.
• They could not have nurses or maids or any other Christian domestic help.
• They could not work or have work done on Sundays.
• They could not incriminate Christians in any way.
• They could not in any way fraternize with Christians.
• In account books detailing their interaction with Christians, they were restricted to using Latin or Italian terms exclusively.
• They were limited to the trade of rag-picking and could not trade in grain, barley or any other commodity essential to human welfare.
• Jewish physicians could not take care of Christians.

Considering all of this, Stoler continues the story. “The Roman Jews faced the possibility of total banishment and thus there was “the famous encounter” between the Pope and Jews in Saint Peter’s Square.”

“The stage is set. The Pope, his cardinals, and priests on one side of the square (piazza) and on the other side stood thousands of frightened Jews awaiting their fate.”

“It took place towards the end of the 15th century when the Pope decided to expel the Jews from Rome and all the territories under his command. He offered to cancel this punishment if they could correctly answer three questions, but these questions would be asked in gestures. Anyone answering incorrectly would be killed. And of course, the Jews were terrified. The head of the Jewish community begged all the brilliant rabbis and scholars to face the Pope, but they were too frightened and refused.  Finally, the only one left was Giuseppe Gobbo, the simple-minded Hunchback, nicknamed “Testabuco” (Hole-in-the-Head).

Stoler smiles as she continues. “So, the challenge begins.  Gesturing the first question, the Pope spreads his hands out in front of him, making slow horizontal, circular movements.” Stoler mimics the gesture. “Giuseppe thinks about it some, then stretches his arm straight forward and points down towards the ground.”

“The Pope became pale, the cardinals gasped, and the priests stood with their eyes wide open.  The Jews were silent, wondering what would happen next.”

“Now the Pope was ready for the second question. The Pope thrusts out his arm, one finger pointing at Giuseppe’s sad face. The Jews stood waiting and trembling, when someone from the back of the crowd asked what happened, someone yelled, ‘Giuseppe pointed two fingers straight back at the Pope!’ ”

“The Pope shook his head and muttered, ‘Amazing!’ Both the cardinals and the Jews looked totally surprised, as no one truly understood what was happening.”

Stoler at this point always begins to chuckle…. “Now the Pope sat silently, gazing at Giuseppe thinking “Could it be that this man is not as foolish as he seems to be?”

“The Jews’ destiny was now at hand. The Pope sat pondering for some time about the third question, then suddenly stood up. A hush came over the crowd and everyone’s eyes turned towards the Pope.”

“Throwing aside the folds of his cassock, the Pope’s pulled out an orange. The Jews cried out, but within seconds, Giuseppe thrust his hand under his frayed coat and drew out a matzah–the unleavened, flat Jewish Passover bread.”

“ ‘Impossible!’ cried the Pope. ‘That man has the wisdom of the Saints!’ And to the Jews he stated, ‘Go home, my children, and continue to enjoy Rome. I have lost, but it was well worth it, because I have met a brilliant man.’ So, the Jews cheered and rejoiced.”

And Stoler continues… “After this scene, the cardinals, and priests, confused and curious, went to the Pope for an explanation. ‘With the first gesture, I moved my hands to indicate that Christianity is universal.’ ‘The significance of the Jew’s answer?’ the cardinals questioned. ‘The answer..’ replied the Pope, ‘When the Jew pointed down, he meant to say: Yes, but the center of Christianity is right here in Rome.’

“ ‘And the second question, Your Holiness?’ they questioned. The Pope replied ‘I pointed my finger forward signifying that there is only one God. And the Jew responded with two fingers, reminding me of the Son and the Holy Ghost.’

“ ‘But the third question, Your Holiness, what was the meaning of the orange?’ The Pope looked around and said: ‘It was a visual demonstration of the major issue of our times, that the world is round and moves around the sun. But the Jew was clever, for he pulled out his matzah, to indicate that there are still many who believe the world to be flat.’ The cardinals walked off shaking their heads. For them, it was inconceivable that an ignorant, poor Jew could outdo the Pope.

In the meantime, the Jews asked Giuseppe about the meaning of his answers. Giuseppe exclaimed, ‘When the Pope moved his hands around in circles, he was repeating what he had threatened, that he was going to scatter us all over the earth. So, I pointed to the ground, by which I meant to say, ‘No, Your Holiness, we are going to stay right here.’ Then, the second question, when the Pope pointed in my face, I understood that he was saying: ‘If you don’t follow my orders, I’ll have you blinded in one eye.’  So, I pointed two fingers back at him, signifying the meaning as written in Exodus — an eye for an eye, a tooth for a tooth.’  ‘And the Third question,’ said Giuseppe, Hole-in-the-Head, ‘The third question was the easiest of all…’”At this point, Stoler laughs her infectious laugh. ‘The Pope showed me his lunch and I showed him mine.’”

In this farcical tale, the deeper significance concerns the perspectives we all have about things. How you see things depends upon your point of view, background, and other factors. Humor allows us all to reflect on ourselves, our circumstances, and, in this case, what it really means to be “simple minded”.  It can diffuse the severity of situations, so that one can continue forward and smile through adversity.

“In the 21st century and with the global pandemic, it is becoming more and more important to understand the perspectives of others, even if you disagree with them.
Humor is one way this can be achieved- and Jews have been using this method for a long, long time”, says Stoler.

Every Jew is called upon to manifest the Covenant in her or his personal intention and behavior. The centrality to Jewish self-understanding emerges with great vividness in humor and wit, which repeatedly invites us to remember events in their effects on human behavior.  In insisting on the significance of Jewish wisdom for identity, Stoler  shows us how Jewish humor and wit can serve a wide range of purposes and can be used creatively to support modes of being (existence) that seem to conflict with each other.

Andrea Stoler, a Jewish American scholar, has been conducting Judeo-Christian themed tours for over a decade. With her scientific background and her sense of humor, she has been observing, explaining, and passing on this ancient wisdom on her Vatican City tours.

About the Author
Brenda is a Latina and a proud Veteran of the United States Army Reserves. She holds dual citizenship in both the United States and Italy. She is a trained historic preservationist who tirelessly advocates the scholarship and history of the Jews of Rome. She has her certification in Jewish leadership and continues advanced studies at the Spertus Institute for Jewish Learning and Leadership. Brenda is also a licensed and accredited tour guide at the Jewish Museum of Rome and the Vatican Museums.
Related Topics
Related Posts
Comments