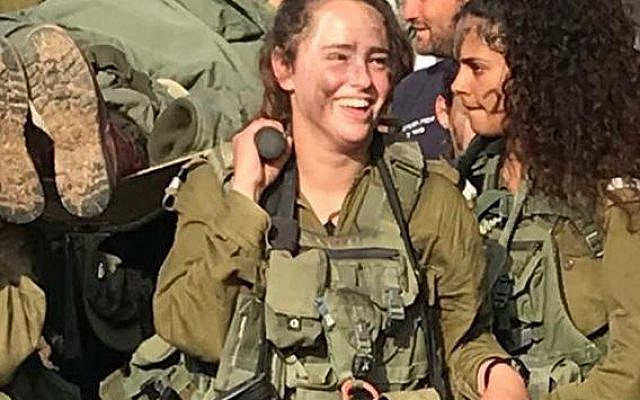 My daughter Zoe completed her military service this week. Without drama or fanfare, she got up early, donned shorts and a blouse, grabbed a massive duffle bag filled with four years of uniforms, drove herself to Ramat Gan’s Tel HaShomer Base …. and checked out.

When she started this stage in her life she was only 17, with a new boyfriend, her head stuffed with advanced mathematics from the insanely demanding high school “bagrut” exams, still sleepy from her last summer as a counselor in her youth movement camp. Most of all, she seemed to me to be full of idealism, with the intuitive sense that she could handle anything.  Her intuition did not fail her.

Zoe was our third and final daughter to serve in the IDF. Unlike her sisters, she chose to opt out of the vaunted, classified world of military intelligence.  Rather, after a year of national service working with high school students in rural Israel, she chose the life of a grunt, an infantry soldier in the Nachal Brigade.

In Israel’s deployment of troops today, an entire division of mixed-gender units guards the borders and helps oversee the security in the West Bank.  Zoe’s Bardelas (Cheetah) battalion began its tour of duty in rural Samaria and then spent another year on patrol in the desert, preventing unwanted visitors from Jordan and Egypt.

For her final year, she worked with adolescents at risk — helping girls who had been placed by the courts in a hostel for delinquents; getting them ready for a “second chance” in the Israeli army.  I suppose that that’s really saving lives.  And it isn’t over.  The IDF will continue to need her combat skills in reserve duty for years to come. Indeed, her red “paratrooper” boots, were the only equipment the army let her keep, as she’ll need them in the future.

When she started the adventure, I remember wondering whether the army would change this joyful, intelligent and idealistic young woman. The dreadful experiences and stress which our soldiers often face when imposing order and indignities on the Palestinian residents of the West Bank can remain with them for some time.  Indeed, for many, they are impossible to suppress.

This might be particularly true for someone who grew up in a privileged, suburban town, with a strong sense of social justice and acute displeasure with Israel’s presence in the West Bank.  Zoe could hardly count the days until she turned 17 and join the Meretz party because of its uncompromising opposition to occupation and refusal to be complacent about pursuing peace.

As she battled her conscience about the morality of serving over the Green Line, Zoe reached the conclusion that it was far better that people with her sensitivities be the soldiers in contact with Palestinians than some of her more aggressive peers who were eager for a chance to exert their authority on Arabs. And so, she participated in many missions that she found distasteful.

Zoe surely retains her political beliefs and commitment to an expedited two-state solution. But she also was part of a delicate arrest, during which the unit uncovered critical information about an imminent terrorist attack. The intervention almost certainly saved lives.  She also got to know many West Bank settlers whom she came to like.  Ultimately, I imagine the experience strengthened her convictions but also gave her a better appreciation for the complexity of the Israeli predicament.

Zoe was our first daughter allowed to share anything with us about her military training and activities. And so, I got to follow along and vicariously experience much of these past four years.  Now that she has reached the end of the ride, it is possible to take stock.

On the one hand, I still find it remarkable that this talented teenager volunteered so willingly, giving the country four of the “best years of her life” to protect us from external enemies and from internal implosion.  But, on the other, her experience is actually no different than the service most of my friends’ children choose.  They serve without bombastic, self-congratulatory rhetoric or arrogance.  Simply doing what needs to get done.

Like most of my contemporaries who moved to Israel forty years ago with the certainty that we would be the generation that brings peace, it is easy to have a sense of failure.  None of us wanted our children to put off their lives as young adults to ensure the country’s security.  Nonetheless, there are also plenty of reasons to be grateful about Zoe’s army experience.

For starters, I am grateful that the only border altercations in which she was engaged involved running down drug smugglers and errant camels.  She is safe, healthy and in shape.

On the macro-level. I am grateful that today, women in the Israel Defense Forces have real alternatives and are allowed to take on meaningful responsibilities for defending their country.  This was not the case when I was a Nachal infantry soldier.

I can’t help but believe that this growing cadre of young, women warriors will bring a new self-assurance with them as they face the civilian challenges ahead. Their incredible contribution leaves them confident that they are every bit as competent as their male compatriots.  The ingrained sense of equality among all IDF veterans will surely come to inform Israeli civilian life and help tear down remaining pockets of chauvinism. While we still have far to go, Israel has made real progress.

On a personal level, I am grateful for the education my daughter received in the line of duty.  The litany of significant physical and mental challenges that Zoe faced along the way will not only provide a reservoir of meaningful and hilarious memories.   They will also serve to enrich her perspective, acquaint her with the diverse social mosaic of our country – and down the road, magnify her contribution to the world.  A challenging military service will empower her to take chances and aim high.

While we were on sabbatical Zoe enjoyed a year of high school at Stanford.  Facebook allows her to observe that alternative route, the proverbial “road untaken,” that her California friends enjoyed during the past four years.  I am a huge fan of Ivy League educations. But it may well be that Zoe’s education in the IDF will serve her even better. In life, it is not just knowledge but character, courage and confidence that allow people to succeed.  As a professor, naturally, I like to give Israel’s universities a lot of credit for our Start-Up Nation. But, I know that the army has a lot to do with it as well.

And so, I am grateful that our flawed and flourishing country – the great unfinished experiment – remains a compelling enough venture for our best and brightest to volunteer a huge chunk of their lives to protect.

Most of all I am grateful to Zoe, for simply helping to keep us safe.  Can’t wait to see what’s next!

About the Author
Alon Tal is a professor at the Tel Aviv University Department of Public Policy, a veteran environmental activist and a candidate in the Blue and White party.
Related Topics
Related Posts
Comments