Raviv Drucker is an Israeli investigative reporter who has been sparring with former prime minister of Israel Binyamin Netanyahu since 2016.

That’s when, as host of HaMakor (“The Source”), a TV current affairs program that ran on what was then known as Israel’s Channel 10, he revealed (see a 2016 post on Drucker’s blog) that Netanyahu, then serving as prime minister, was promoting the idea of Israel buying three German-made submarines for about $1.5 billion at the same time as his personal attorney David Shimron was the lawyer for the man representing the German company in Israel.

Last week, a new 3-installment expose aired on Israel’s Channel 13 (which is where the now-defunct Channel 10 ended up after a merger) that has probably left thousands of viewers shocked and incensed. (Part 1, in Hebrew without subtitles, can be viewed online here.)

But I expect few will have felt the personal affront that my husband and I did from Sara Netanyahu who has a hefty presence in the program. The disdainful references she made, via recorded conversations, were to us despicable.

Now, after listening to her, the prospect of the Netanyahus returning to the Prime Minister’s residence after November 1’s elections, as most pundits are predicting, seems more ominous to me than before.

And yes, her husband’s re-election, if that’s what happens, would clearly mean Sara‘s return to power via the invisible strings she so relishes pulling.

What exactly did she say, you may wonder, about my husband and me? 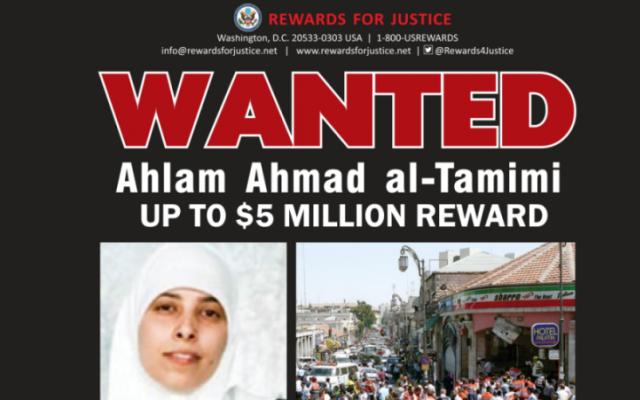 Details of a reward posted by a unit of the US State Department in 2018 [https://rewardsforjustice.net/rewards/ahlam-ahmad-al-tamimi/]
Well, we are two of the terror victims she referred to dismissively in the context of the 2011 Shalit Deal over which her husband presided as prime minister at the time. [See “Shalit Prisoner Swap Marks ‘Colossal Failure’ for Mother of Israeli Bombing Victim“, Haaretz, October 19, 2011]

The HaMakor recordings expose the active role she had in it.

Since 2011, our Malki’s murderer, Jordanian reporter Ahlam Tamimi [“27-Feb-22: The Jordanian woman who bombed Sbarro has earned another title“], has enjoyed freedom and fame, in part, because of the Netanyahu couple’s determination to release her along with another 1,026 terrorists.

More than a decade ago, Barak Ravid who was then a political commentator at Haaretz, wrote [“New Info on Shalit Deal Shows, Yet Again, That in the Mideast, Nothing Is as It Appears”, Haaretz, July 24, 2012] that

“at the time that Netanyahu made the decision to go ahead with the prisoner exchange, he regularly denied that his considerations were based on anything but security and diplomacy. Anyone who asserted otherwise was met with a furious response, at best, and a threatened libel suit, at worst. Only recently, several long months late, he agreed to admit – in an interview with the German newspaper BILD – that his wife Sara put pressure on him to approve the deal.”

…about his wife: “My wife gives me tremendous support and warmth. She is the cornerstone of our family, she raises our children, she always tells me you have to make time for the children.” When all of Israel was following the fate of abducted IDF soldier Gilad Shalit, 25, it was Sara, says ‘Bibi’, who finally convinced him to free Shalit from his captors. “She was the one who told me, think of that boy Gilad Shalit”, says Benjamin Netanyahu. “Think of that boy in that dark dungeon, having no hope, no light. Think of him as if he were our son. Think of him, his mother, his father, and then make the decision.”

I now understand why my articles and personal letters to the Prime Minister’s Office pleading for Tamimi to be deleted from the list of prospective releasees was ignored. [See “22-Jul-22: The loneliest battle of my life“] We never stood a chance of eliciting a response.

Hundreds of those 1,027 imprisoned Arab terrorists were, like Tamimi, convicted murderers. Yet Netanyahu willingly handed them to the extorting terror group, Hamas, in return for an Israeli hostage, Gilad Shalit.

None of them had taken as many lives as Ahlam Tamimi, our child’s murderer: 15 men, women and children. And none had been sentenced to anything near the 16 consecutive life sentences she was given.

Many of those releasees returned to active terrorist duty. Some subsequently murdered innocent Israeli civilians. A significant part of the current Palestinian Arab terrorist leadership – both in Gaza and in Istanbul – would still be behind Israeli bars today were it not for them winning freedom in the Shalit Deal.

Ahlam Tamimi herself has actively incited to terror from her TV programs and social media platforms. [See “23-Feb-22: Weaponizing Turkish teenage girls: What the Sbarro bomber did next“]

But what precisely was Sara’s contribution to this lopsided, ill-conceived and lethal exchange?

Nir Hefetz, for years a spokesperson for Benjamin Netanyahu and currently a state witness in the former prime minister’s ongoing corruption trial, has the central role in the three-part Channel 13 expose I mentioned above.

Recorded conversations he had with Sara Netanyahu shed more light on her interference in Israel’s decision to do the Shalit Deal. They’re especially important because – in my opinion – unlike Hefetz’s own oral testimony to the court and what he says in his interviews with Raviv Drucker, the veracity of Sara’s recordings is indisputable.

The only retort her camp was able to offer right after they aired was that Drucker had paid Hefetz “hundreds of thousands of shekels” for them. (Mentioned here.)

To which I say: money well spent! The Israeli public is entitled to hear their contents and the dirty truths that have been swept under the carpet until now.

You can get a sense of what I mean from the following Hebrew-language exchanges between Sara Netanyahu and Nir Hefetz. The translation is mine and thus unofficial of course:

Nir Hefetz: We just sat, about an hour ago, with the families of the Organization of Terror Victims

Nir Hefetz: Then one of them said something about you; that you assessed something very correctly. Gave you, so to speak, a compliment.

Nir Hefetz: Then your husband told them: “Listen, this may surprise you, but it doesn’t surprise me at all. She is s-o-o-o smart.” [We hear Sara chuckling in the background.] That’s how he said it to them, in that same tone as I did to you now. Like that, narrowed his eyes, like this, he says to them: “She’s so smart. She’s so smart.” It was simply… you know, they saw that he said it from the heart.

Sara Netanyahu: By the way, who do you think asked him to have this meeting?

Nir Hefetz: And you know, he is so glad that he did it because now there’s a positive report in Ynet.

Sara Netanyahu: I told him: “You must listen to them [the bereaved families]. It can’t be that only after the decision you’ll sit with them.”

Nir Hefetz: He sat with them for an hour and a half.

Mrs Netanyahu evidently felt she had given us a big enough lollipop to win our docility and compliance. But, for the record, these two terror victims, parents of a murdered child, will not be silenced that easily.

Our fight to have Malki’s murderer extradited by her current protector, Jordan’s King Abdullah II, will continue until she is tried under US law in Washington DC. And, thereafter, once again behind bars – the only place she belongs.

About the Author
A Jerusalem-based freelance writer, law graduate and commentator on the challenges facing people with special needs, Frimet Roth together with her husband Arnold co-founded The Malki Foundation (www.kerenmalki.org) in 2001. It provides concrete support for Israeli families of all faiths who care at home for a special-needs child. The Roths' daughter Malki was murdered at the age of 15 in the terrorist bombing of the Sbarro pizzeria. Her personal blog, under the title "The Good, The Bad, The Ugly", is at http://frimetgbu.blogspot.com The views expressed here are personal.
Related Topics
Related Posts