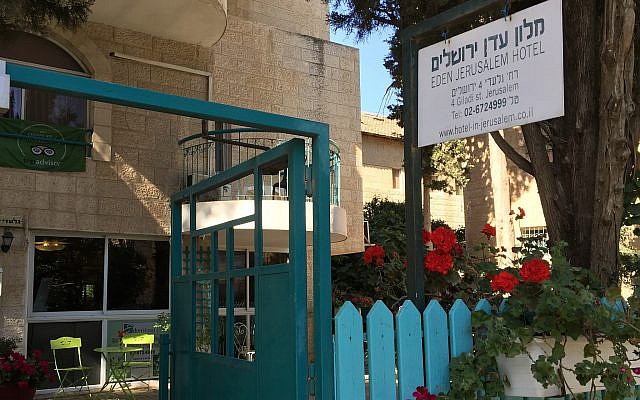 The day the mukhtar stayed home, some 200 Jews were sitting in the lobby of a small hotel in south Jerusalem and waiting for him.

The time: A Shabbat in February 2016, following the morning services.
The place: The Eden Hotel on a quiet residential street in Talpiot-Arnona.
The reason for the gathering: A panel discussion on the topic of neighborly relations between Talpiot-Arnona and the Arab neighborhood of Sur Baher.

At the time, the “knife Intifada” was at its peak. Stabbings and car-rammings had become part of daily life in Jerusalem and Talpiot-Arnona was hurting. It was just near here that the wave of unrest had started five months earlier, when a Jewish motorist died after his car was stoned by teens from Sur Baher on Rosh Hashanah. It was just near here that three men were murdered a month after that in an attack on an Egged bus by terrorists from Jabel Mukaber. The tension in the neighborhood was palpable.

As I joined the Jews of all stripes who flocked to the event from homes and synagogues, I hoped to hear about the possibility of dialogue and repair from the speakers who were being assembled: a leading radio personality, the director of the Government Press Office, a senior academician, and the West Bank reporter of Channel 10 News. But the real draw of the event was the inclusion of a representative of the Arab community: Zohair Hamdan, the mukhtar of Sur Baher, who had been billed as chairman of Jerusalem’s coexistence forum.

The room filled beyond capacity and the start time came and went. But we waited. And waited. Because one panelist was conspicuous in absence.

“We just had a call from the mukhtar,” the moderator finally announced, putting an end to the murmurs and speculation. “He regrets that he can’t come today because someone in his family has died.”

“Sure, someone died,” whispered the woman sitting next to me. “My work once spent weeks planning a staff day. On the day of the event, the Arab workers called, one after the other, and said that they could not come because someone died.” It did not bode well for coexistence.

The mukhtar, stressed the moderator, had shown good will and taken considerable risk by agreeing to participate in the panel in the first place. A peace activist who was staunchly opposed to the division of Jerusalem, Zohair Hamdan had been shot and critically wounded by members of the Tanzim in Bethlehem in 2001, after organizing signatures of more than 10,000 Arabs opposed to transferring Arab neighborhoods in Jerusalem out of Israeli control. But somehow that offered little consolation.

The task of discussing relations between Talpiot-Arnona and Sur Baher now fell on the Jewish panelists from Arnona alone. And their message was uniformly gloomy. All of them had despaired of the possibility of coexistence between the two communities, and felt that separation was the only solution. And the mukhtar’s absence seemed to strengthen their case.

As each successive speaker spoke, you could almost hear the bubbles bursting. Throughout the room, dreams of coexistence rose, froze, and came crashing down on the white marble floor.

The panelists had moved to Arnona to give their children a quiet life surrounded by greenery. Instead, they felt they were living on a hostile border, were afraid to let their children play outside by themselves during the day, and were woken by the calls of the muezzin at night. Sadly, they had come to the conclusion that there is no way to quell the grass-roots violence; the Arab villages that had been annexed to Jerusalem, they felt, must be outside the municipal boundaries, outside a wall, outside the state.

And when the mukhtar stayed home, there was no one on the panel to argue that they were wrong.

When the panelists finished, the audience sat in somber silence. But suddenly, as the floor was opened to questions, the discomfort yielded. One by one, members of the audience made their voices heard and a different reality began to emerge.

A local political activist described the complex reality of life in the Arab villages within Jerusalem’s borders. Although the residents have the right to vote in municipal elections, they cannot vote in national elections. Although they pay taxes, they lack adequate infrastructure for water and sewage, are missing hundreds of classrooms, and have a paucity of employment possibilities. She described efforts to bring about a more equitable distribution of resources that would improve the quality of life in East Jerusalem, ease Arab frustration, and in turn improve the security situation and relations between the two populations.

A delicate young woman then took to the podium and introduced Medabrot Ivrit – Women Speaking Hebrew, a non-profit organization in which volunteers teach Hebrew to Arab women from East Jerusalem in an attempt to break down the language barrier. She herself had taught in Sur Baher, where the women were keen to learn and to interact with Jews, and she invited us to do the same.

Next we were introduced to the Good Neighbors project, a grassroots initiative that sprang up to ease tensions and foster friendships in the mixed neighborhood of Abu Tor, just down the road. As part of the project, Arabs and Jews join together in initiatives such as Hebrew and Arabic lessons, a boys’ soccer team, a bi-weekly women’s forum, and cooperation on issues of infrastructure and security.

As they stood up to share their experiences, these extraordinary ordinary people filled the room with expressions of care and concern, recounting tales of coexistence in their neighborhoods and places of work, and filling the room with sparks of light.

The day the mukhtar stayed home, he left us clapping with one hand in a room that echoed with disappointment. When the event drew to a close, we left the hall and returned to our world, discouraged and despondent. But as we stepped into the bright winter sunshine, we were inspired and heartened as well. Because the day the mukhtar stayed home, the good people of south Jerusalem showed that the vision of peaceful coexistence is not going down without a fight. 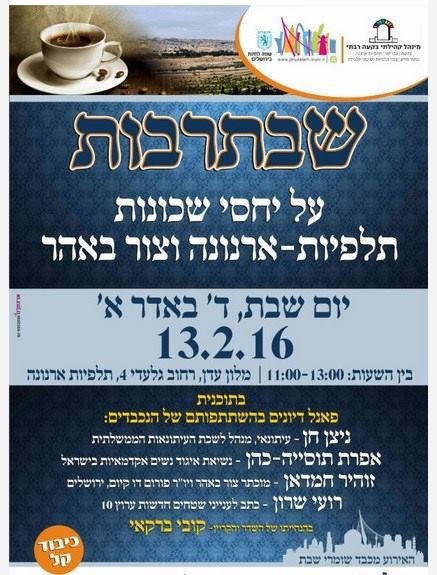