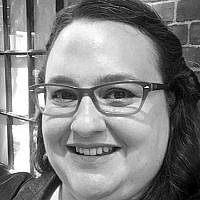 The Blogs
Adina Gerver
Apply for a Blog
Please note that the posts on The Blogs are contributed by third parties. The opinions, facts and any media content in them are presented solely by the authors, and neither The Times of Israel nor its partners assume any responsibility for them. Please contact us in case of abuse. In case of abuse,
Report this post. 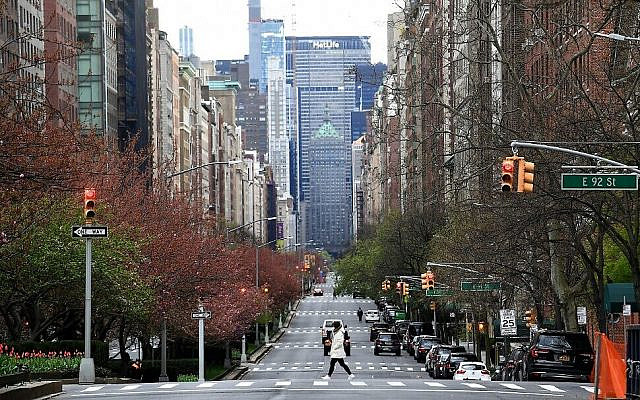 A woman walks on an empty Park Avenue in New York City on April 10, 2020. (Johannes Eisele/AFP)

Immediately upon awaking on Thursday, April 2, I grabbed the thermometer and pulse oximeter from my headboard shelf. The first thing I did upon waking most mornings was recite “Modah Ani,” but since becoming ill with presumptive COVID-19 early on Sunday, March 21, taking my temperature and checking my oxygen saturation level took precedence over even that brief utterance.

It was slightly below 98.6º F. I was shocked. I took it again. The same result! After 11 interminable days, diagnosed first with COVID-19 and then with bacterial pneumonia, my fever had broken! It was the first time I had seen a temperature below 100.6º F in 11 days!

I quickly recited Modah Ani and then all I wanted to do was say Hallel with both blessings. I wanted to dance and sing Hallel aloud in my kitchen, at full volume, not worrying what my NYC neighbors might think. I had never been as scared as I had been for the past five days, and I had never felt so relieved as I was to be afebrile.

I am 40 years old, single, childless, living alone in Manhattan, and I just nursed myself through an 11-day bout of moderate COVID-19 with pneumonia. (My roommate had, sensibly, returned to live with her parents, so I had been alone in our apartment since before falling ill.)

What did I do before and during my bout with COVID-19 to help myself?

Aside from those three major things, I also had the following in place:

At 7:30 pm on the evening of Thursday, April 2, after a day spent joyously updating family and friends about my fever having broken, I finally got to sing Hallel in my kitchen. I had to take breaks to catch my breath; I had to sit for part of it; I kept having an irrepressible urge to stand and sing, so I stood when I could and sat when I couldn’t. The verse “כָּל עַצְמוֹתַי תֹּאמַרְנָה יְהוָה מִי כָמוֹךָ מַצִּיל עָנִי מֵחָזָק מִמֶּנּוּ” (Psalms 35:10) was all I could think of. My very bones, from their very white blood cell-producing marrow on out, were praising God, along with my lungs and legs and heart. I am sure that a sweeter Hallel has never reached Heaven from my lips. I wept with joy at having survived; at being exhausted but alive; at the mortal fear that this was a brief respite and that I could still get sicker somehow. I poured out my heart to God with every last bit of the little strength I possessed after my harrowing illness.

The next day, just before Shabbat, with my temperature still the very odd (for me) below-98.6ºF, I asked on Facebook if one could bentch Gomel via Zoom. I could! And that Sunday afternoon, accompanied by 75 people, from my sister to people I’d never met but who were moved by my story, we davened mincha separately and I led the recitation of Tehillim for all those who were still ill. A misheberach was said for my continued healing, and I benched Gomel. It was amazingly sweet and wonderful. We stayed and chatted for as long as I had energy.

I had truly never felt less alone in my life — even though I’d seen not a soul but two triply-masked Hatzalah workers in over two weeks, and I wouldn’t get clearance from my doctor to leave my apartment and take a short, masked walk to a nearby park for another few days.

About the Author
Adina Gerver lives and works as an office manager at a small non-profit and as a freelance writer and editor in Manhattan. In her spare time, she organizes and attends Zoom meetings with her extended family, keeps close tabs on friends via social media, and tweets to the public at large.
Related Topics
Related Posts
Comments