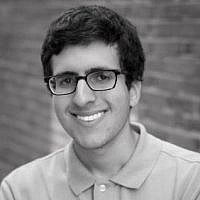 The Blogs
Eric Margolis
Apply for a Blog
Please note that the posts on The Blogs are contributed by third parties. The opinions, facts and any media content in them are presented solely by the authors, and neither The Times of Israel nor its partners assume any responsibility for them. Please contact us in case of abuse. In case of abuse,
Report this post. 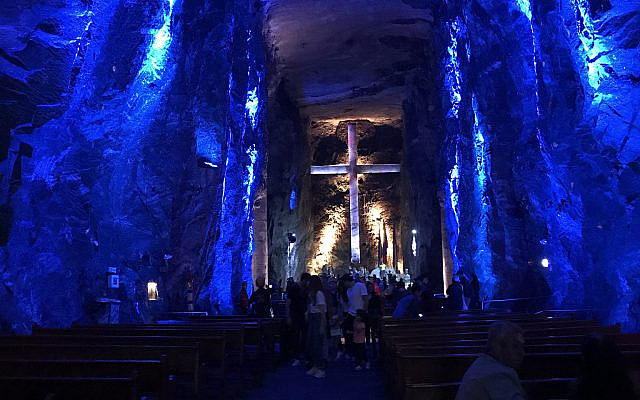 One hour north of Bogotá lies the town of Zipaquirá. Unable to decipher the bus timetables, and with Google Maps proving to be stubbornly innacurate, I took a taxi. Potholes, speedbumps, and long stretches of dirt and gravel road swarmed the highway, squeezed between mountains crawling with clouds.

Across several blocks of quaint cream and pink Spanish colonial buildings, up a staircase and a hill, and beyond a quiet cafe overlooking the valley, I found a loud tourist enclave. Ticket and information booths, a museum, trinket shops, and even a small zipline crowded in on the plaza from all sides. The whole area baked beneath the tropical sun, the thin mountain air barely a screen. Attendants in bright yellow shirts directed me to the correct line and asked in Spanish if I received my audio guide, then added, “Audio guide?” in English to be sure. At first, it’s not really clear what the crowd is all about.

The crowd is about what’s just out of sight: the titanic caverns underground, host to vast cathedrals and massive crosses carved raw out of salt rock.

The main cathedral, a daunting atrium guarded by tremendous stone pillars bursting out of the rock, is buried more than 600 feet underground. A giant cross stretches from the altar to the cavernous ceiling above, glowing white-hot.

To arrive there, visitors pass through winding tunnels that lead to 14 stations, featuring exhibits of crosses carved out of the stone in different and creative ways. Each cross represents a distinct part of the life and story of Jesus Christ. Some crosses barely escape the host of rock they’re buried in, rough outlines. Others stand cold and alone in the shadows. Others are illuminated with blue or white or golden light. Other crosses are not sculpted but instead excavated, the shape of a cross hovering in the emptiness between salt walls. The illuminated crosses stand before vast expanses of dark mines.

The place was haunting.

Or, at least it would’ve been if I were alone. Fortunately I wasn’t—squeezed in a crowd of chattering and photo-snapping Colombian and foreign tourists, the salt mines were by no means any apex of spirituality. But as a Jew, the insistent repetition of the symbol of the cross affected me. 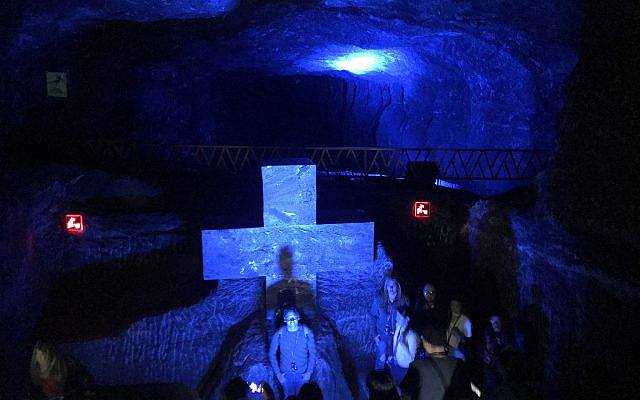 A crowd swarming to pose in front of one of the 14 crosses.

Yes, we have the Star of David, but there’s no major biblical story attached to a Star of David or meaning inherent in its shape. We have plenty of central stories and mythologies to gravitate towards—especially the Israelites’ Exodus from Egypt. But even the story of Moses makes up just five of the 54 parshot recited every year; it simply doesn’t have the same relative weight that the crucifiction holds in Christianity. In fact, nothing in Judaism has the same weight of the cross, I thought, sitting alone in the cold, dusky cathedral, caked in salt. The air wound tight with the echoed whispers of prayers to Jesus.

The nature of our faith is diffuse. There are many kinds of Jews, many ways to practice the faith, and many stories and prayers that are told and sung. Who’s to say if the story of Saul is more important than the story of Solomon? Or that the Amidah is more central than the Kaddish? I felt a shock of alienation and unmooring, not only because I was a Jew alone in a sea of devotion to Christ, faced with towering monuments of Christianity, but because of the overwhelming strength of symbol and story of the cross.

Jesus on the cross. Jesus died for humanity’s sins. The cross felt almost unbelievably powerful, able to convey the entirety of a faith in just two strokes, two lines, and every time I looked at a different salt cross I saw Jesus’s body nailed to it, head drooping forward, hair dirty and thin, blood on his pale hands dripping down to his dusty brown ankles.

The idea of Jesus on the cross has always disturbed me, ever since I was a child. I would think, how are so many people devoted to a religion that centers such gruesome violence? I always felt the violence of Judaism as remote in the pages of a text—Christianity hit me with violence over the head. Look—it’s Jesus’s dead body, and his hands and feet are full of nails!

Frozen there in a bench at the back of the cathedral, faced with a glowing cross and surrounded by unfamiliar prayers, I finally remembered the shema.

Of course. How could I forget the shema?

So silently, and completely to myself, I said the shema.

I’m not well-versed in scripture. Otherwise I wouldn’t be just throwing out the idea that the center of Jewish belief is the singularity of the world and of life itself. I’m pretty sure that scholars would disagree with me there. But when cornered by the symbolic power of the cross, the illuminating light of the shema was so great that I felt like the cavern roof blew off the cathedral.

The Zipaquirá Salt Cathedral is a remarkable place. On Easter, the body scrub shops and the emerald booths succumb to the faithful and its tunnels and caverns swell with worship.

It’s not my worship, but I can wonder at it.

There are so few Jews in the world. I loves to travel, and have lived abroad and will live abroad again in places with few or even no Jews. I believe that all people should be able to experience the tremendous breadth of this incredible world that we live in, and I certainly plan to do so. But because our tribe is so small, travel can feel isolating, and even brief expatriation can feel like exile.

At the same time, through travel I have learned that there is power in isolation. Time alone is time where you’re forced to confront yourself, your own past, persona, and identity. I believe that this intense, forced introspection amid diaspora and constant engagement with other traditions and beliefs has contributed to the richness and wisdom of the Jewish tradition over the millennia.

It’s always a bit scary, but now I can honestly say, back safe in the Philadelphia and New York Jewish bubble, that on my next trip I’ll look forward to being surrounded by goyim. They’ll certainly make me think.

About the Author
Eric Margolis is a writer and translator based in Philadelphia and Tokyo. His stories, nonfiction, and translations have been published in Vox, Slate, Eclectica Magazine, Metropolis Magazine, The Times of Israel, The American Library of Poetry, and more.
Related Topics
Related Posts
Comments