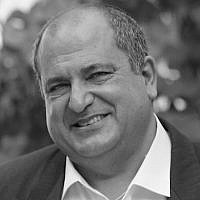 The Blogs
Eitan Chikli
Apply for a Blog
Please note that the posts on The Blogs are contributed by third parties. The opinions, facts and any media content in them are presented solely by the authors, and neither The Times of Israel nor its partners assume any responsibility for them. Please contact us in case of abuse. In case of abuse,
Report this post.

Recent “pushback” to the statements in support of TALI and pluralistic Jewish education in the Israel secular public school system by Minister of Education Naftali Bennett, have prompted vocal opposition both in the ultra-Orthodox and ideologically secular media. This fall, a small group of ideological secularists, called “The Secular Forum” has organized and become active in a number of schools, including TALI schools, trying to eliminate the “harmful” influence of Judaism in secular education. This article explores the origins of the dispute and why ignoring Jewish traditions and legacy is not the right answer.

Secularist schools should be allowed to operate. Surprisingly perhaps, I hold that those who, like myself, work to promote pluralistic Jewish and Zionist studies in Israel’s general public education (mamlakhti) system should support the Secular Forum’s demand to establish a network of secular schools. Let me explain. In recent months, acrimonious public debate has been raging in Israel over Jewish education enrichment programs. The Secular Forum has been especially vociferous against what it terms “religionization” in non-Orthodox state schools, sounding the alarm at the prospect of secular children coming into any contact whatsoever with Jewish content. Were it not for the religious Minister of Education imposing his Jewish agenda, goes secularist reasoning, their children could be studying philosophy, Darwinian theory of evolution, and even Shakespeare.

Secularists are seizing on the fact that the Minister of Education wears a knitted kippa to try to rally public opinion against what they term his attempts at “religious coercion.” Their allegations however are quite unfounded. Support for Jewish studies in the secular education system began long before the appointment of minister Bennett:  in fact, in 1994 the Shenhar Commission appointed by a secular government, recommended the strengthening of Jewish studies.

That said, perhaps they should criticize against Jewish studies in secular schools on the fact that Orthodox organizations are very active — and often funded by the taxpayer — in these schools. Yet in this case, the schools themselves are responsible, not the Minister, for allowing these organizations unlimited access.

A year ago, I approached leaders of the Secular Forum with a plan for cooperation, given that the organization I head also promotes pluralistic, humanistic education based on a critical approach. We too want secondary school students to gain a liberal education and learn about other cultures. We too acknowledge that the lore and wisdom taught by our sages and scholars over the ages, while extraordinary, is not entirely adequate preparation for modern life. We too oppose the infiltration of secular schools by Orthodox organizations. Well, so why don’t we work together? Why not follow the middle way of nurturing humanistic values and encouraging inquisitive minds as per our own rich, ancient intellectual and cultural heritage as well as other cultures?

A senior member of the Secular Forum delivered the following reply a few months ago: ”Although we can agree on many points, there is a fundamental difference between us, which is the very possibility of a humanistic, secular Jewish education. While you believe that this kind of education can teach both Jewish and humanistic values — we’re worried that the religious force is simply too powerful…  so that high school graduates will identify with Orthodox Judaism — I see this all the time, even among students in a relatively secular environment. That’s why we don’t want to associate with the general school system any longer; we want our own school system in which Judaism will play a very minor part. While I agree that we’re on the same side of the fence, I don’t think TALI has quite grasped the immediate threat to secular values in Israel today.”

The reply is typical of all radical groups who lack sufficient conviction in the strength of their own values to withstand external influences.

Just like the ultra-Orthodoxy we are familiar with withdraws into itself, we now have a new group on the Israeli social scene with the exact same psychological motivation — secularist Neturei Karta who seek to withdraw into the confines of secular humanism, shunning any Jewish content for fear that a young person might just find in our heritage that which is beautiful and attractive. This group paints reality in stark black-and-white, denying the complexity and meaningfulness of any Jewish content in shaping our future in Israel. The secularist withdrawal is no less typical of a “separatist mentality” than is Haredi withdrawal from society. If we want to leave this mentality behind, we must finally concede that we erred in forging an Israeli identity on the rejection of Judaism.

We must infuse Zionism with Jewish meaning. To this end, we need contact with Judaism, must become familiar with it, criticize it when there is just cause, and develop esteem and even love for what our wealth of Jewish intellectual and cultural tradition has to offer.

At this point, no productive conversation between the parties differing on this issue is possible; all attempts to strike a balance between respect for the lifestyle of secular families and introducing an enriching educational Jewish experience have failed, in the view of all-out secularists.

Therefore, I continue to support the Ministry of Education in its efforts to introduce liberal, pluralistic Jewish culture into secular schools, while at the same time I suggest the Ministry regard favorably the demand on the part of radical Israeli secularists to have their own education system, on condition that a sufficient number of parents and teachers be found,  and that the secularists stop interfering in Jewish enrichment programs in the general education system, even if they fail to achieve a majority for their own schools.

Can “orthodox” secularists rise to the challenge?

Dr. Eitan Chikli is lecturer in Jewish Education at the Schechter Institute for Jewish Studies and Susan and Scott Shay Executive Director of the TALI Education Fund.

About the Author
Dr. Eitan Chikli has been the Susan and Scott Shay Director General of the TALI Education Fund since 1994 and a lecturer at the Schechter Institute of Jewish Studies in Jerusalem.
Related Topics
Related Posts
Comments