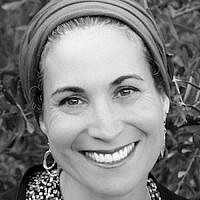 The Blogs
Shoshana Judelman
Apply for a Blog
Advertisement
Please note that the posts on The Blogs are contributed by third parties. The opinions, facts and any media content in them are presented solely by the authors, and neither The Times of Israel nor its partners assume any responsibility for them. Please contact us in case of abuse. In case of abuse,
Report this post. 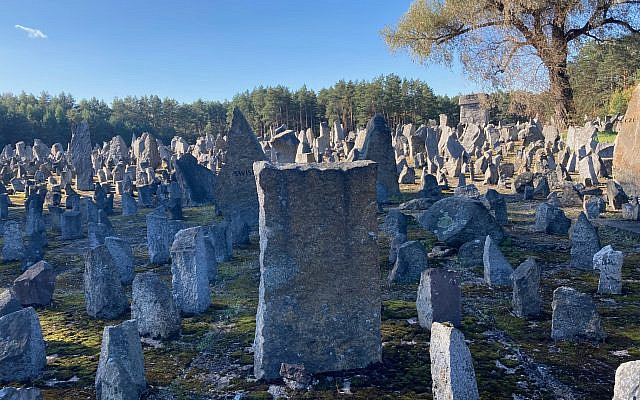 The memorial at Treblinka. (courtesy)

There is a terrible beauty in the story of the Akeidah.

On one hand, every time I read the words of the Torah describing the journey of Avraham Avinu to bring his son, Yitzchak, as a korban to Hashem, I am horror-struck by the “what-if” that lingers in the background of the story. What if Hashem didn’t stop Avraham at that last second?  What if Avraham couldn’t receive the stop order in a moment of such heightened emotion?  There is so much latent pain embedded in the event.  On the other hand, I am continuously inspired by the profundity of this potential sacrifice, by the devotion and total faith of Avraham Avinu.

Inevitably my thoughts turn to the Piaseczno Rebbe and his heartbreaking, soul searing perspective on this event.  In numerous places throughout the Aish Kodesh, the Rebbe references the Akeidah.  In his drasha on the first yahrzeit of his own son, R’ Eliezer Ben Tzion Shapira, killed in the initial bombing of Warsaw in 1939, the Rebbe tells us that the Akeidah was the beginning of a new form of worship called mesirus nefesh, and that every single Jew until the end of time has a portion in this service.

The Akeidah was a test of the intention and desire of Avraham Avinu and Yitzchak Avinu.  But although the test began with them, it didn’t end with them.  Rather, every single act of mesirus nefesh for being a Jew that occurred in the world thereafter was a completion of the Akeidah.  Each and every death is elevated to be understood as an act of worship and each and every death is sanctified through this paradigm.  With these words, the Rebbe hoped to give the Jews of Warsaw something to hold onto in the darkness, something to enable a continued connection with Hashem in a place where it seemed impossible to find Him.

Two weeks ago, I was in Warsaw, and I too was looking for Hashem. My relationship with Poland as both an actual place and as a concept is a complicated one.  My father’s family emigrated from Poland to America before World War I, but my mother’s family lived there until the beginning of World War II.  They fled into Soviet Russia to get away from the German army, and 6 years of hardship, loss, and suffering followed.  Upon being repatriated, they found no survivors from the family who had remained in Poland- all had been murdered in the Sobibor Death Camp.  My grandparents made their way as fast as they could with their children through the country they had once called home to DP camps in Germany and, from there, to the US in 1951.

For me, every moment and every footstep in Poland contains both joy and sadness, beauty and horror, strength and despair, pride and anger.  And, above all, connection and responsibility.  Over the course of ten days, our group was immersed in the majesty and richness of Jewish History and were branded by the pain of centuries of mesirus nefesh. We went to places where my heart felt near to bursting with the energy of Torah, kedusha and devotion to Am Yisrael and, inevitably, to places where I saw before the eyes of my soul the bloodshed and torture that courses through the veins of Jewish History.

At the end of the Akeidah episode, Avraham Avinu names the place where these events unfolded, “ה’ יראה,” “Hashem will see.”  The Kozhnitzer Maggid, the ancestor of the Aish Kodesh, explains that this name enables us to understand that even in the darkest moments of our lives, in the tests and in the struggles when we do not feel Hashem’s presence and are unable to see His light, He always sees us.

Even in the darkest places ה’ יראה.

Somehow, I felt that in Poland.  I journeyed into the heart of darkness, and I found light and connection.

On the last day of our journey, we went to Treblinka.  Nothing remains of the extermination camp itself, but the energy of evil is still tangible.  In this (now) quiet, almost idyllic spot, 900,000 Jewish people were murdered.  I walked through the memorial- 17,000 stones of various sizes representing destroyed communities and destroyed people and I felt Ashkenazi Judaism crying out to me.

I felt their voices and heard their hearts calling to me to see them, to tell their stories, to draw strength and purpose from 800 years of Jewish History, and to try my hardest to connect our next generations to the vibrantly beating heart of Am Yisrael.

I feel it now as both a burden and a holy responsibility.

May Hashem avenge the blood of all the kedoshim of every generation and gather them to Him in the closest of embraces.

May He strengthen all of Am Yisrael to keep moving forward, to allow the words of the Kozhnitzer Maggid to enter into our hearts, and know that we are seen, to connect to the unending faith that comes to us as a spiritual inheritance from Avraham Avinu and to keep taking upon ourselves the collective mission of seeking out Hashem’s presence and shining His light into this world- even in the darkest of places.