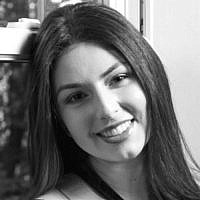 The Blogs
Danielle Hodes
Apply for a Blog
Please note that the posts on The Blogs are contributed by third parties. The opinions, facts and any media content in them are presented solely by the authors, and neither The Times of Israel nor its partners assume any responsibility for them. Please contact us in case of abuse. In case of abuse,
Report this post. 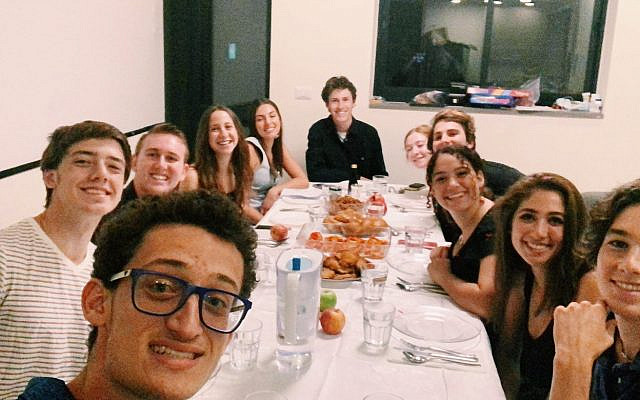 My roommates and the boys apartment eating Rosh Hashanah dinner on the second night. (Courtesy of Danielle Hodes)

It is no secret that the high holidays, usually a time of travel and excitement in Israel, would feel different amidst a global pandemic, especially during a nationwide lockdown prohibiting large gatherings.

Israel is the one place in the world where an entire nation participates in the celebration of a holiday, even the most secular Jews feel compelled to observe elements of Shabbat and respect holidays as public transportation does not run and all stores close for the holiest days of the year.

Jerusalem on a Friday night is a ghost town, not a single open restaurant or store in sight, and the entire city sleeps for the weekend, creating an obvious separation of Shabbat from normal days of the week. During Yom Kippur and Rosh Hashanah this year, the distinct spiritual atmosphere only available in Israel on the high holidays struggled to feel any different than the normal, quiet lull of the city experienced during the nationwide lockdown two weeks prior.

A dead nightlife and barely crowded streets have become the new normal in Jerusalem; Ben Yehuda street has never been more empty of tourists and the shuk is quiet, free of the swarms of Israelis bargaining for a better deal on cherry tomatoes and lafa. It became apparent that this year, the distinct spirituality usually felt in Israel during the high holidays would have to be sought out and worked to achieve.

Being from New Jersey, seeking out a Jewish community, and working to achieve sacredness during the high holidays is no new concept. Jews in America must go out of their way to live in densely Jewish neighborhoods or enroll their kids in youth movements such as BBYO and USY to instill the value of the Jewish community. The temptation to assimilate to secular life in America is strong and present; many Jews don’t observe Shabbat or keep kosher and rarely make the time within their very busy work schedules to attend synagogue on the high holidays.

The country does not go on pause for Jewish holidays, and Jews in America enter a dangerous cycle of not allowing religion to interfere with their day to day lives. Israelis take for granted the ease of celebrating holidays in a religious state as it is hard to not feel the holiday surround you, from seeing displays of Judaica from windows on the streets to swarms of Chasidim trekking to a synagogue to pray at, Israelis are constantly reminded of the prominent role religion plays in society.

For my first Rosh Hashana on a gap year in Israel, I was surprised by almost forgetting there even being a holiday at the start of the day. It wasn’t until I left the comforts of my small apartment and walked the streets of Jerusalem that I was able to embrace the sacredness of the day. I was amazed by the quantity of outdoor prayer services being held on every corner, seas of people praying loudly for civilians passing by to hear. Simply walking by a minyan is enough to be included in the prayers of Rosh Hashanah.

The streets of Jerusalem were filled with a chorus of incongruous prayers, all coming together in beautiful harmony. Only in Israel could a minyan extend out onto the street to fit all the masked, socially distanced participants wanting to pray in unison. While davening with Chabad, I could hear fragments of shofar blowings coming sporadically from other prayer services. Without even trying, anyone in proximity to a minyan was included in the mitzvah of hearing the shofar being blown for the first time on Rosh Hashanah.

The notion of praying loudly outdoors, allowing for anyone walking by to listen and enjoy, would not have been possible had all services been held indoors in private synagogues. Contrary to what was expected, Rosh Hashanah during a global pandemic was more unifying and inclusive to all under the restrictions of a lockdown. Even in the excruciating heat of the daytime, large numbers of people still made the effort to find a minyan when they could have easily live-streamed one from the comfort and air conditioning of their homes.

Yom Kippur was the one holiday I was most worried to celebrate during a pandemic as the only form of services available are outdoors. I knew I would not be able to partake in outdoor prayer services while fasting for health reasons, and many of my peers decided to live stream services from their synagogues at home. This Yom Kippur, I took advantage of the social aspect of the communal gap year living space to help make the fast more bearable and manipulate the hours I attended services to the evenings.

On Erev Yom Kippur, I attended a Chabad service and was in awe at the sea of bodies dressed in their finest white attire, extended out onto the roads to pray. Traffic lights halted operation and people prayed freely on main roads as if it were the most normal thing in the world. Standing there, I was overcome by a sense of connection with everyone, all desperate to make Yom Kippur as meaningful as possible despite the unconventional circumstances.

When it came time to sing Avinu Malkeinu, I watched men stretch their chests out to the sky as if trying to embrace God, and I felt immense gratitude to be in Israel and have a community to fast and experience Yom Kippur with. Once services ended and I returned to my apartment building, my roommate and I stayed up all night talking to the boys in our apartment building until sunrise.

We asked each other deep philosophical questions touching on our insecurities and upbringings and used our time together to reflect on our downfalls and successes of the year. By the time my roommate and I had woken up the next day, there were only two hours left of the fast, eliminating the issue of possibly having to attend outdoor services in the heat to pass the day. Although my fast was relatively social and somewhat unconventional, I felt I still was able to reflect on my past year and satisfy the purpose of the holiday.

By the next day, a Sukkah was already built on the roof of my apartment building, keeping up with the fast pace of the consecutive holidays. Sukkot, pandemic or not, is a beautiful time to be in Israel. Standing on the roof, I could see miles of beautifully decorated sukkahs crammed on the balconies and decks of homes, no space too small for a three-walled tent with schach. Sukkot in Israel cannot be replicated as sukkahs are proudly displayed outside of homes for everyone to see; not a single home is passed without it having a visible sukkah.

For the first night of Sukkot, it was important to me to eat Shabbat dinner in the Sukkah and say the proper prayers. Normally, I would be spending this time of year at home, Sukkah hopping between family friends’ homes. Nonetheless, I was grateful for the Sukkah that Aardvark Israel had set up for the gap year program as I was able to enjoy my meals with my new friends, ringing in the new year properly.

Although I was wary about celebrating the high holidays in lockdown, Israel never fails to set the tone for this time of year as special and spiritual. Even in lockdown, I was able to find community and feel connected to the holidays while completing some of the necessary mitzvot through outdoor services. Israeli society complied with the current situation and acclimated in the best way possible. Even amidst a global pandemic, Israel did everything in its power to make this time of year as special and uncompromised as possible.

About the Author
Raised as an American Israeli in Livingston New Jersey, Danielle fostered her love of Israel from a young age. She attended Golda Och Academy, a Jewish private school, where she studied Hebrew and Judaics and learned the value of living within a strong Jewish community. Currently, on the Masa gap year program called Aardvark, Danielle is interning at Journalism related internships and takes courses for college credit. Next year she will be a Journalism Major at the University of Maryland at College Park.
Related Topics
Related Posts
Comments