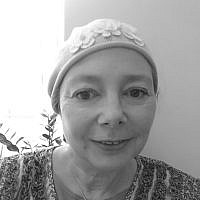 The Blogs
Rosally Saltsman
Apply for a Blog
Advertisement
Please note that the posts on The Blogs are contributed by third parties. The opinions, facts and any media content in them are presented solely by the authors, and neither The Times of Israel nor its partners assume any responsibility for them. Please contact us in case of abuse. In case of abuse,
Report this post.

Whether art imitates life or life imitates art is a moot point. But there’s no denying that when it comes to television and its hundreds of millions of viewers worldwide, not to mention the millions more on Youtube, the influence American television has on society in general and shaping among them the mindsets of the 7 million Jews in America is, like Phoebe would say, huge.

In 2013, the Pew survey estimated American assimilation and intermarriage between 58% and 73% and no doubt it has grown since then. The assimilation of European Jewry is a whopping 85%. When you consider that 65% of Europe’s Jews were murdered in the Holocaust, you can see how assimilation has been even more successful in ridding Europe of Jews than the Nazis were, may their names be blotted out.

There are many factors that have contributed to intermarriage and assimilation in the United States but the greatest factor to my mind has got to be acceptance. Whereas people used to sit shiva for children who married out, nowadays people shrug and ask complacently, “What can you do?” Literally I’ve had people answer me that way when they tell me of their children’s marriages to non-Jews. Obviously, giving them the answer to this question would be a priority.

But I think television, by far the most influential medium, has played a large part in this too. In the 1950s, television aired The Goldbergs, a Comedy-drama about the joys, trials and tribulations, quirks and lifestyle of a Jewish immigrant family living in New York City. While the series might not have been strictly kosher, the Goldbergs were invariably and identifiably a Jewish family and their focus was on trying to avoid assimilation not speed it along.

Fast forward to the most loved and longest running sitcoms of the last two decades. They also feature Jewish characters (certainly Jewish writers and actors) but their message about where Jews fit into American society is as different from the Goldbergs’ as Borsht is from Mayonnaise.

Jerry Seinfeld just performed 4 sell out shows in Israel, 10 years after his sitcom ended. He was supposed to do only a one night gig but the show’s tickets even at a thousand shekels a pop, went like hot latkes on the first night of Chanuka. Seinfeld was one of the most popular shows on television with an almost all Jewish cast. But the only character who was Jewish was Jerry. And what did that mean to Jerry? Sometimes he made a joke that referenced his being Jewish, his parents moved to Florida, his mother was a stereotypical Jewish mother but that was it.

Similarly Friends, Seinfeld’s rival for ratings, featured six friends: Phoebe, Joey and Chandler, three non-Jews, Ross and Monica, who had a Jewish father and a non-Jewish mother, which makes them not Jewish according to Halacha and Rachel Green, the only real Jew in the gang (and one of the three Jewish actors in the series). Ross never dates a Jewish girl, aside from Rachel and Monica marries Chandler. So the Geller family’s only Jewish progeny is baby Emma. Well, you never know Ross and Rachel probably went on to have more kids. Unfortunately, this is an accurate reflection of what is happening to Jewish family life in America. And again it was portrayed as a non-issue for Rachel’s family.

Again was this an attitude mirroring society or shaping it?

That brings us to the Big Bang Theory. Another popular long-running sitcom that is evolving (pun intended) into the most popular show in television history. It follows the same formula (pun again): The cast is predominantly Jewish, two of the characters are Jewish but Jews who don’t want to be connected to Judaism in any way and who marry non-Jewish spouses and no one even splits an atom.

And fans all over America (Jewish America too) cheered these couplings! Who didn’t celebrate every time Ross and Rachel got back together? Who wasn’t hoping that Penny and Leonard would finally tie the knot? The actors playing Howard and Bernadette could be married in real life according to Jewish law but not their characters. But we don’t care. After all it’s only a television show, right? Or is it really only a television show when people watch it religiously?

And of course Xmas was a big celebration in all these shows. In fact the only celebration.

Television has come a long way from the Goldbergs. But is it mirroring society or setting the stage for its transformation? We identify with television characters, their struggles and dreams. We root for them, empathize with them and tune in every week to follow the exploits of their lives. We are touched by them! How much of their philosophy of life penetrates deeper into our psyche? How much of it influences our own decisions and our views about our place in society? And how apathetic does it make us to the loss of our rich Jewish heritage that people shrug their shoulders and go, “What can you do?”

Perhaps if we show a different face to the camera, one of non-acceptance of compromising our identity, one of intolerance to the concept of eschewing Judaism and its 3,000 years of our identity, television will have no choice but to portray Jews as a proud people who unapologetically identity as traditional Jews and, yes, that makes them different from the rest of American society. When that happens perhaps Hollywood will become Holy Wood.

About the Author
Rosally Saltsman, originally from Montreal, lives in Israel. Her books include Finding the Right Words, Parenting by the Book, Soul Journey and A Portion of Kindness.
Related Topics
Related Posts
Comments