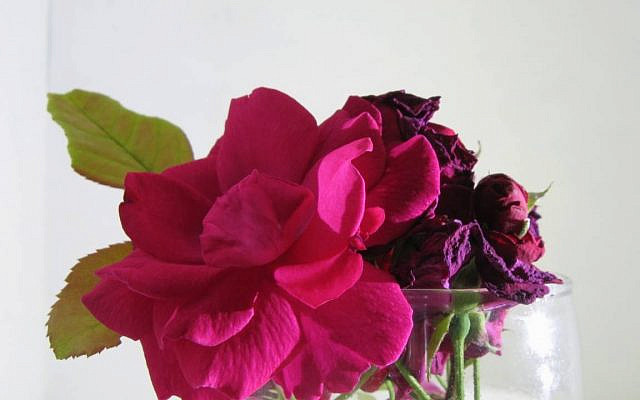 Several years ago, I read about the story of a lovely Polish woman named Roza. Roza had a smile that seemed to speak volumes, even in the magazine picture and a pensive, thoughtful look streaming from her crystal blue eyes. In her almost 90 years, it appeared that Roza had led a charmed life. Her husband Domonik worked in a successful food distribution business, which despite living in Communist Poland, had afforded her a nice home and food that was always plentiful. Roza and Domonik had 3 sons and a daughter, who then gave them 14 grandchildren whom she doted over and cared for and who in turn, as she aged made sure to visit and call her often, taking extra care of her after she lost her beloved Domonik.

Yet it wasn’t until 2003, when one of her grandsons, a history student at the University of Warsaw, came across several archived photographs of a Jewish community in the Polish countryside from the 1920s and 30s.  As he gazed at the photographs, staring back at him were the faces of himself, his siblings, and his cousins. And with that discovery an almost 60-year-old secret was uncovered.

Roza wasn’t always Roza. Once upon a time, decades earlier, Roza was an 18-year-old named Racheli, who had grown up in a large, close-knit Jewish family not far from Krakow.  She was the only one of her entire family to have survived the Holocaust.  As she made her way back to her hometown, after surviving several ghettos and camps, Racheli was filled with fear, anticipation and a sense that she could come across danger at any moment. Confused and alone, barely even remembering who she was as her former self, she feared every path in front of her. One day, only a few miles from home, she wandered into a café, without any money for the pastry she had just ordered, the fear began to rise until she saw the familiar smile of a former Christian neighbor.

Not only did this neighbor provide the few coins for her to pay her bill but she quickly found comfort and ease speaking with him; she could be a person that had not endured all that she had over the past 6 years. Somehow, she stop looking over her shoulders, she calmed, and she was very much able to think about a future. She could forget the world of anti-Semitism and hatred that was suffocating her. That neighbor, her Dominik, became the source of a new life. As she tells it, with very little effort, Racheli, her family, her identity, her first 18 years were buried alongside the ashes of the rest of her family, and millions of other Jews across Europe. Racheli was gone and Roza was born.

As an American Jew, I was stunned to read Roza’s story and even more shocked to find out that there were others like Roza.  Jews that had survived the Holocaust, but unlike the survivors in the United States, Israel, Australia, Great Britain and so many other places in the western world, they did not go on to rebuild Jewish lives. Instead, they lived for decades under the communist rules in Eastern Europe hiding their identities from the still ever-present fear of anti-Semitism. The story plagued me in many ways, as I wondered if this was another way in which Hitler had won. Roza was very much alive and in her early 90s when I read the article, with a beautiful family, and so much to be grateful for. But Rosa had also lived those years so fearful, that her own children and grandchildren never knew their own roots, believing that Rosa was raised as an orphan until she had met their father.

In the past several months, as we have begun to navigate a world in which Covid is still very much here, but we are attempting to move back into our daily routines, I have thought a great deal about Roza and the others that were like her. In 1945 they were alone, they were without family and friends and living in places where anti-Semitism had existed long before the Holocaust took place and was very much present in its aftermath. They had to go on existing in a world in which to them was grounded in a fear of their identities. If they went back to who they were as Jews, the anti-Semitism was all encompassing. So instead of choosing to live with that fear, they did what they felt they needed to in an effort survive – they changed completely who they were.

Over the past almost 19 months, I see myself as changed at my core. Prior to the pandemic, I wasn’t fearful of germs, or disease. I didn’t have intense anxieties over public places or travel, I didn’t feel overwhelmed with crowds or panic on public transportation. Yet through a world in which many of us have dubbed, “Pandemic Parenting” I’ve done, said, and thought things that I never thought were imaginable before. I’ve made choices that have agonized me to sleepless nights and fear filled days and I have struggled to maintain who I was as a wife, mother, daughter, sister and friend.

I can’t pretend to know or understand the choices of those like Roza coming forth from the worst human tragedy in modern history, but I’ve learned that the need for survival makes individuals do things that they otherwise would never have dreamed of in the past. To survive – we often times become who we ourselves don’t even recognize.

Of my family of 5, 4 of us (minus one because of age) are all vaccinated; and we are all in good health. And one point, a few weeks ago, I felt that a return to my pre-pandemic self was on the horizon. But with break through cases being spoken of more and more, and school closures because of outbreaks beginning, that return of normal seems to be slipping away from me. This new anxiety and fear that I developed is raging once more. And so, the me that once judged the decision that Roza made, is finding myself understanding how she came to make it. The fears that have overcome me over this year and half are driving me to make choices still that are very much out of my character in what I believe is an effort to stay healthy and survive.

In the post Holocaust world, the intense, immediate fear of the Nazis was gone but anti-Semitism and hatred of Jews didn’t start with the rise of Hitler and the Nazi party, and nor did it end with it. And thereby Roza and others opted to leave their Judaism behind to seek survival. I learned from the article that Roza finally shared Racheli with her children and grandchildren, several of whom have begun paths to discovering more of their Jewish identities. She said that after all these years, she finally feels herself again; which truly made me happy to know.

I am going to keep Roza and Racheli with me as I navigate these next months. I am going to weigh who I was before with who I must be now to survive – both physically and mentally. I know that leaving my identity, as Racheli did, is not the answer, but taking my old self with me and balancing it with my fears of today will be what leads to my entire survival.