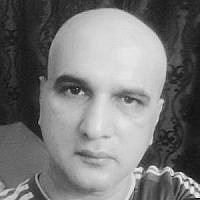 In the past, two Times Of Israel (TOI) bloggers, Shai Reef and Steve Postal, wrote about me in their TOI blogs: “A Zionist in the Trenches” and “The Birth of a Muslim Zionist.” Upon the recommendation of many Western and Israeli friends and followers who support my cause of educating and showing the light of truth to Muslims and other Anti-Semites, I have decided to become a Times of Israel blogger and do my own writing. In this, my first article, I would like to introduce myself in my own words.

For over one thousand years, Muslims have fought or been in continuous war with Jews in an unending dispute about whether Israel is the Jewish homeland, and whether Jews have a right to exist and live there as a nation. Tens of thousands and perhaps countless lives have been lost over the centuries because of this vicious, unending hatred and genocide of the Jewish people! Nonetheless, our Creator (God) has enlightened anyone who is willing to listen to Him and accept that HE will not allow any person or group to destroy HIS chosen people, the Jews, and the nation of Israel from the face of the earth. Yet, since there are far too few who are willing to listen to G-d, this senseless battle rages on!

In these circumstances, it is absolutely critical for us peaceful and moderate Muslims — those of us with a sound knowledge of history and truthful facts — to step forward with a deep desire in our hearts to reveal TRUTH! Yes! I, Naveed Anjum, have made it the goal of my life to bring forth documented facts that reveal and prove the TRUTH that Israel is the Jews’ RIGHTFUL nation and homeland! This is my introduction. I am a Pro-Israel Muslim. I believe that God has revealed much to me. Because He has, I have ardently advocated for Israel through social media platforms for a number of years. I consider this an educational cause. Thus, I have founded the following Facebook pages: Legitimacy of the Zionist State and Naveed Anjum; and the Groups: Legitimacy of the Jewish State, Israel the Legitimate State, Christian Support for Israel, and Exposing Middle East Truth. In addition, I am an editor of a large Canadian Facebook page: Never Again Canada.

For over 7 years, I have worked for intercultural coordination between Muslims and the Jewish people. I started this when I went to the Netherlands in 2005 for my academic studies. It was there that — for the first time — I met Jewish people. I also met many newly converted Muslims in the Netherlands who had converted from Christianity to Islam. This was when my views about Jewish people began to change. While in the Netherlands, I interviewed some of those who had converted to Islam and asked why they had chosen Islam rather than Judaism, Buddhism, Hinduism, etc. Most of them declared their reason for leaving Christianity was that they could not accept the “Son of the God” doctrine. According to them, Christians believe in Jesus being the Son of God. However, Jews call Ezra the son of the God. Since I had not researched the Jewish religion at that time, I felt unable to respond.

Before I could finish my university studies, severe problems in my family made it necessary for me to leave the Netherlands and return home. Upon my return, I began my research of Judaism. I learned there is actually no concept in Judaism of God having a Son. Even more so than Muslims, Jewish people are absolute monotheists. This was the first item I discovered about Jewish beliefs. Upon further research, I discovered that everything told by Muslim Media about Jewish rabbis and scholars is very wrong.

During my alternate research, I discovered the Quran declares that the Land of Israel belongs only to the Jewish people. In addition, as I researched the Jewish tribes in Medina, God revealed even more to me. I wanted to make my research fruitful, so I began to reach out to people. I shared facts I had learned and holy scriptures I had found about Jewish people and Judaism. I felt such a burden about this topic that I wanted to write a book. That prompted me to contact many publishers in America and Britain about publishing this book. Unfortunately, I did not have the financial resources to pay for their publishing services. Undaunted, in 2009, I chose an area within my own country that contains a poor and primitive city, and began distributing handbills and pamphlets to educate the people there.

My efforts were not accepted. In spite of their understanding the truths that I shared, the people in that area physically tortured me and filed complaints against me with local authorities. After suffering various forms of harassment and persecution, I was forced to abandon offline education and the revelation of truth. Following that persecution, I returned to my home, where I was subjected to even more physical attacks. This drove me to seek safety in hiding. I gave up all outside activities, stayed inside my house, and devoted myself to more intensive research and studies about Israel’s legitimacy. I created Facebook pages to share what I was learning. Through them, I discovered that social media can be a more effective tool to learn, teach, and share knowledge. I began providing as much truth as I could through posting and sharing on my personal Facebook timeline. Eventually, I recorded a homemade video speech in which I shared what I had learned through the Quran and Islamic traditions about the rightful existence of Israel in the Middle East. I uploaded that free video to YouTube as: Israel Exists Rightfully. I then distributed that video link on various Facebook pages, through Twitter Tweets, and to Palestinians. (My Twitter account is: Naveed Anjum @nomi76us.)

The country where I lived is one of the most anti-non-Muslim countries in the world! This should help you understand how serious my situation was, living in that country from one day to the next. I kept hoping that, soon, I would be able to leave that country. I longed to move to a nation where I would not live under the constant threats and fear of being killed because of my work regarding the legitimacy of the Jewish state, Israel. By that time, I had 30,000 friends and followers from all over the World. Finally, in 2015, a number of my friends and followers helped me to escape abroad. Since then, I have been able to run this educational cause smoothly and safely.

The heart of my mission is to promote real facts about Jewish and Christian beliefs, provide a historical analysis of the Jewish state, overcome the misinformation and misunderstandings within Muslims’ minds, and help people escape persecution and death for their beliefs so that they can start a new life in safety. To fulfill this mission, I intend to travel to as many schools, colleges, and universities as possible, where I can give lectures that combat anti-Semitic lies and prove the legitimacy of Israel as the Jewish state. As a result of my own experience, I am determined to assist religious victims such as myself to escape their own terrors and live in safety.

To accomplish this work and further these urgent causes of my passion, I need your encouragement! I will share more in my future blog posts. I hope you, my readers, enjoy reading them.