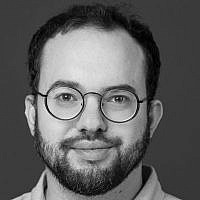 The Blogs
Ronen Shnidman
Apply for a Blog
Please note that the posts on The Blogs are contributed by third parties. The opinions, facts and any media content in them are presented solely by the authors, and neither The Times of Israel nor its partners assume any responsibility for them. Please contact us in case of abuse. In case of abuse,
Report this post. 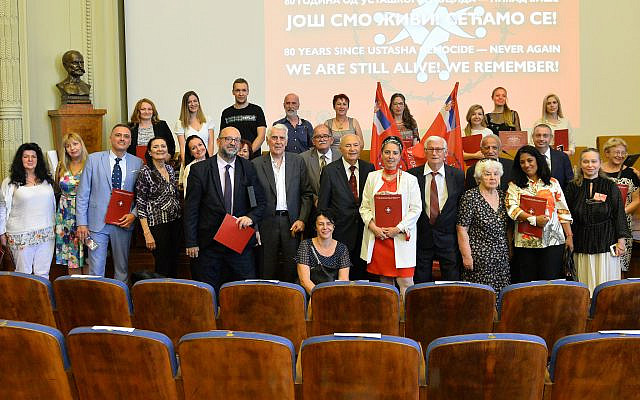 The last survivors of the only Holocaust death camp not run by the Nazis held a ceremony marking 80 years since the camp’s founding this past Wednesday in Belgrade. While the camp victims association is predominately ethnically Serb, the event was held with significant participation of Jewish organizations and the Israeli and Russian governments. The event demonstrates the importance that Holocaust remembrance still retains in the ties between the Jewish people, in Israel and the Diaspora, with the peoples of Europe.

Jasenovac, the camp in question, is not as well known as its German counterparts in occupied Poland and elsewhere but was more brutal, with the mass killing done in a manual fashion. Some 57 different documented methods of death were employed at Jasenovac. These were used in the killing of hundreds of thousands of ethnic Serbs and tens of thousands of Jews, Roma and Croatian anti-fascists. The brutal mass carnage that took place at Jasenovac, located in present-day Croatia, led Holocaust expert Prof. Gideon Greif to dub the camp “the Auschwitz of the Balkans.”

Melancholy and warning for the future

“For me the 80th anniversary does not change my emotions, feelings or experience — whether it is the 5th or 80th anniversary it carries the same sadness and deep melancholy,” says Danijela Danon, secretary general of the Federation of Jewish Communities in Serbia (SAVEZ). Danon is the granddaughter of Jasenovac victim Rabbi Daniel Isak Danon and delivered a speech at the Jasenovac Martyrs event held at the Serbian Academy of the Sciences and Arts. “We are just remnants of a world that is forever lost,” she adds.  “Our community lost a lot of its tradition, its faith and culture. 90 percent of Jewish population in Serbia was annihilated during the Holocaust. 11,000 Jews, 11,000 worlds [lost], each of them unique and unrepeatable.”

At the Jasenovac Martyrs event special awards plaques were given by the Association of Jasenovac Camp Inmate Survivors President Slavko Milanovic to a number of prominent personages for their involvement in the culture of remembrance of Jasenovac. Award recipients included former President Reuven Rivlin, Russian President Vladimir Putin, UN Secretary General Antonio Guterres and World Jewish Congress President Ronald Lauder, among others.

“The Jasenovac death camp should serve as a permanent warning to humanity: such crimes can be committed by any tyrannical, criminal and vicious regime,” says Greif, who also received an award at the event. “The Ustasha Croat regime felt that it could conduct horrible crimes against humanity without being punished… It is therefore incumbent on human beings to fight any evil regime from an early stage, so that such a regime will never commit atrocities that will cost innocent lives.” 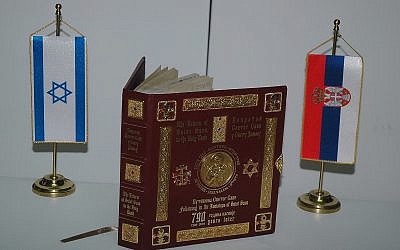 A special gift was presented to Foreign Minister Yair Lapid by the Serbian government at the event and accepted on his behalf by Ambassador Yahel Vilan. The gift, a hand-bound book with 24-carat gold gilded decorations titled “The Return of Saint Sava to the Holy Land” documents the ties of the Serbian people to the Holy Land dating to the period of Serbia’s founding Nemanjic dynasty.

A special section in the book is dedicated to the family of Tommy Lapid the famous Israeli media personality, politician and father of Yair Lapid, who was born and raised in the Serbian city of Novi Sad. Tommy Lapid’s father was murdered in a concentration camp while he and his mother were ethnically cleansed from Novi Sad and deported to the Budapest ghetto during World War II. They survived the war there due to the efforts of Raoul Wallenberg and moved to Israel in 1948.

Serbia’s record on the Holocaust

Serbia stands out among the formerly Communist nations of Eastern Europe for its positive efforts to address the Holocaust. This includes not only commemoration efforts, which after all also have the Serbs as victims, but also restitution of Jewish Holocaust-era property.

In 2016, Serbia enacted a law to specifically address heirless and unclaimed Jewish property — one of the first of its kind in Eastern Europe and the Balkans. Among the elements of the law included a proviso for the contribution of EUR 950,000 per year for 25 years in compensation to the Federation of Jewish Communities in Serbia to support the revitalization of Serbian Jewish communities.

This contrasts favorably with Poland where there has been no legislation to redress heirless and unclaimed Jewish property. Instead, the Sejm last month passed a law placing a 30 year deadline on attempts to recover Jewish property seized by the Nazis, effectively preventing any World War II-era compensation claims or appeals of past decisions. 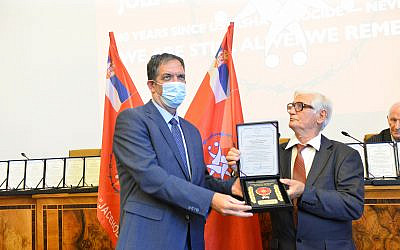 Israel’s record on the Serbian genocide

On the Israeli side, former President Rivlin’s award at the event came in part in recognition of his 2018 visit to Jasenovac where he called upon Croatia to face up to its Ustashe past. Rivlin, the first Israeli president to ever visit Serbia, also acknowledged the camp as the Auschwitz of the Balkans, placing it within the wider narrative of the Holocaust.

To the best of this author’s knowledge, the State of Israel has yet to make a formal declaration clearly recognizing the genocide of the Serbian people during World War II. However, it has repeatedly demonstrated it’s sympathy to Serb suffering at Jasenovac and elsewhere during the war. Likewise, the Yad Vashem Holocaust memorial recognizes the mass murder of Serbs at Jasenovac during the war.

This compares with other countries that have largely ignored this chapter of World War II.

“Few countries have recognized the genocide of the Serbian people and this is very unfortunate” says Greif. “It is a sign of the hypocrisy of the world, its double standards and the unfairness of relations between countries.”

He adds, “The suffering of the Serbs was a terrible suffering and we will reach the time when the nations of the world will recognize it and show empathy and sympathy for the persecuted Serbian people, whose fate is largely similar to the fate of the persecuted Jewish people for many generations.”

Kosovo: The sticking point in relations

What burdens the Israel-Serbia relationship today is Israel’s 2020 recognition of Kosovo’s independence. This policy about-face under the Netanyahu government came about supposedly under pressure from then U.S. President Donald Trump and in exchange for the placement of Kosovo’s embassy in Jerusalem. While the placement of a Muslim nation’s embassy in Jerusalem was a minor coup for the Netanyahu government, it came as a serious shock in Serbia. Israel’s decade-long policy of non-recognition toward Kosovo, a policy shared by Russia and China, was highly appreciated there.

For Serbs, Kosovo is not just a renegade province. It is a sort of holy land, a “Serbian Jerusalem” that lies at the core of Serbian national identity. It’s also not just a matter of history. Persecution of the ethnic Serb minority and attacks on Serbian Orthodox holy sites in Kosovo since the end of the Kosovo War in 1999 keep Serbian public opinion inflamed on the issue.

Despite the offense to Serbian sensitivities, realpolitik would dictate that after years of bucking American policy regarding Kosovo, Israel’s capitulation in this regard is unlikely to be undone. Israel’s current ambassador to Belgrade has said as much on Serbian national TV to much consternation there.

What remains are the ongoing strengthening of people-to-people ties between Serbs and Jews, of which the culture of remembrance of the Holocaust for both peoples is the most prominent example.  (Serbia’s relationship with the Zionist movement would be another but that is best left for a separate article.)

The primacy of people-to-people ties

Serbian ambassador Ljiljana Niksic described it best during her remarks at the event with a quote from French author Victor Hugo originally written about the massacre of Serbs by the Ottoman Turks in 1876. Although written about civilians killed during the Serbian Wars for Independence, it could equally apply to the both the Serb and Jewish peoples during World War II.

“They are killing one nation. Where? In the heart of Europe. Are there eyewitnesses? Only one. The entire world. The governments look at everything through the myopia of raison d’état. The view of humanity is through something else, that is their consciousness and the traditional ties of people.”

About the Author
Ronen is a freelance journalist as well as an experienced Hebrew-English translator. He has also written for Buzzfeed, Haaretz, JTA, JNS, The Forward and The Jerusalem Post.
Related Topics
Related Posts
Comments
Advertisement