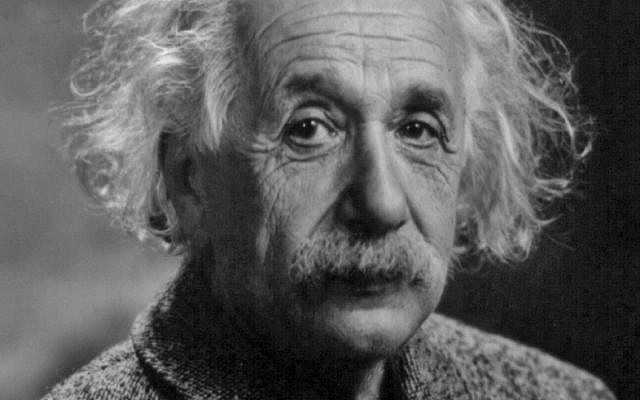 March 14 of this year marks the 139th anniversary of the birth of Albert Einstein.

The number 139 is not one we are likely to pay attention to, so this anniversary may not get a great deal of attention. We tend to sit up and take notice when the anniversary is a multiple of 100, or 50, or 10, or even 5.

At the very least, we have a psychological bent toward even numbers, and 139 is decidedly odd. But if Einstein were still with us, he might point out that 139 is more than odd; that it is, in fact, a prime number,
which makes it quite significant in its own right. He also no doubt would point to the arbitrary nature of anniversaries, and of calendars for that matter. Einstein’s date of birth on the Hebrew calendar was the 19th of Adar in the year 5639. This year, Adar 19 corresponded to March 6, last year it was March 17, next year is a leap year so it will be February 24 for Adar 1, and March 26 for Adar 2.

I suspect that the differences between the solar calendar of secular society and the lunar calendar of Jewish tradition had some influence on Einstein’s thinking. After all, when we say, for example, that Chanukah is coming late in a given year, it is just as true to say that Christmas and New Year’s are early. The experience of living with two so very different calendars could not help but point to the relativity of time.

And as we remember Einstein, we do so, along with the rest of the world, for his contributions to science, as the recipient of the 1921 Nobel Prize in physics, and the person named in 1999 as Time magazine’s Person of the Century. More than anyone else, Einstein was the person responsible for the paradigm shift in science that replaced Newton’s mechanistic view of the universe with a relativistic understanding of space and time.

And we also remember him as an especially noteworthy member of the Jewish people, one of our many gifts to the world, a prime example of what we sometimes refer to as yiddishe kop, intelligence born out of a
tradition of literacy and learning, one in which teachers and sages are seen as heroic. And we may also recall that as a Jew, Einstein was forced to flee Nazi Germany as a refugee, and that he was a supporter of the Zionist movement and the State of Israel.

We do not remember Einstein in a religious context, however; he was not a rabbi or talmudic scholar or theologian. I want to suggest, however, that we should remember him as a prophet. Admittedly, in our tradition we consider the age of the prophets to have ended long ago, but we cannot rule out the possibility of modern prophets altogether. And while we would tend to be suspicious of anyone claiming to be a prophet today, Einstein never made any such claim, so he cannot be rejected as a false prophet.

But I do think a case can be made, and I hope you will consider the possibility as I put forth seven reasons for naming Albert Einstein as a modern-day prophet.

1. Einstein’s name has become synonymous with genius. We typically say that a given individual “is” a genius, but everyone who truly fits the description will more accurately refer to “a stroke of genius” in the sense
of something coming from outside of themselves. The word “genius” originates from ancient Rome, and refers to a guiding spirit or deity, a supernatural source, like a guardian angel. (Prophets are the recipients of divine revelation, some form of communication, or we may call it inspiration, which literally means, “to breathe into,” which is how God brings Adam to life in the Book of Genesis.)

2. As a teenager, Einstein imagined himself chasing after a beam of light, which led to his understanding that light cannot be slowed or stopped, that the speed of light is constant, and that it is time, instead, that must vary. This thought experiment was the foundation that led to his special theory of relativity. Other thought experiments followed, notably the difference in what we would observe when standing on a train vs. standing on a platform as bolts of lightning strike the train. (Prophets are known to receive revelation via visions, as in Jacob’s ladder, Joseph’s dreams, the chariot of fire that appeared to Elijah, and Ezekiel’s wheel within a wheel.)

3. One of Einstein’s most significant achievements was determining the nature of light as consisting of quanta, aka photons, and that light has a dual nature, as both waves and particles. Clearly, he had a unique relationship to the phenomenon of light. (Prophets are closely associated with light and enlightenment, Genesis famously says that light was the first of God’s creations, Moses has a halo when he descends from Mount Sinai after speaking to God face-to- face, a direct encounter with the divine countenance that we pray may shine upon us.)

4. Einstein gave us a new way of understanding the universe, of space and time as a single phenomenon, spacetime. (Prophets teach us about the nature of Creation to better understand the Creator, and our place in the world.)

5. Einstein invoked the philosophy of the Enlightenment founder Baruch Spinoza in explaining his own view of a pantheistic God. That is a view that traditionally has been seen as heretical, but is consistent with some
approaches to Kabbalah, God as the Ein Sof, and certainly is acceptable within Reform Judaism. Above all, it is a view consistent with science; as Einstein famously remarked, “science without religion is lame, religion
without science is blind.” His resistance to the uncertainty principle of quantum theory was famously expressed in the quote, “God does not play dice with the universe,” asserts that Creation is governed by laws that are rational and ultimately discernible, as well as based on an underlying monotheism, as God would have no one to play dice with. (Prophets often have been critics of established religious authority, in favor of a direct encounter with God via nature.)

6. Einstein spoke out for social justice. He did so on behalf of his own people, in opposition to Nazi Germany, and in favor of Zionism and the State of Israel, but also as a strong critic of racism and supporter of the civil rights movement in the United States. He also was quite critical of capitalism, arguing on behalf of socialism and advocating for a democratic world government and pacifism after the conclusion of World War II. (Social justice is one of the primary themes of the Prophets section of the Tanach.)

7. Einstein warned President Roosevelt of the danger of Nazi research into the development of the atomic bomb, leading to the Manhattan Project. He later became an outspoken critic of nuclear weapons. His warnings largely have fallen on deaf ears, at least as far as governments are concerned. In 1947, the Bulletin of Atomic Scientists introduced the image of the Doomsday Clock, setting it to seven minutes before midnight. On January 25 of this year, the minute hand was moved up to two minutes before midnight, the closest it has ever been, mainly because of North Korea and our president’s threatening remarks, and not taking into account Putin’s recent statements about Russian nuclear missile capability, and his animated image of the bombardment of
Florida. (The biblical prophets issued warnings about the destruction of Israel and Judea, and the name Jeremiah has become synonymous with pronouncements of doom.)

Einstein’s predictions in the realm of physics continue to be supported by astronomical observation and experimental evidence. Perhaps his predictions about society and politics ought to be taken seriously as well?

Why bother arguing for Einstein as a prophet?

Because American culture always has had a strain of anti-intellectualism, one that includes resistance to many aspects of science, notably Darwinian evolution.

Because climate change is at least as great a threat as nuclear war, and is being met with denial, dismissal, or disinterest from significant portions of the population, and all too many in leadership positions.

Because facts and logic are under assault by religious fundamentalists, cynical political opportunists, and corporate executives with eyes only for short term profits.

As Rabbi Barry L. Schwartz makes clear in his recently published book, Paths of the Prophets: The Ethics-Driven Life, our prophetic tradition is of vital importance, one that always has and always will be relevant for us.
Naming Albert Einstein a prophet should not detract from this tradition, but rather enhance it, by adding a dimension that we need now more than ever: the truth that ethics cannot be divorced from an understanding of the world, of reality, in all its complexity, and glory.