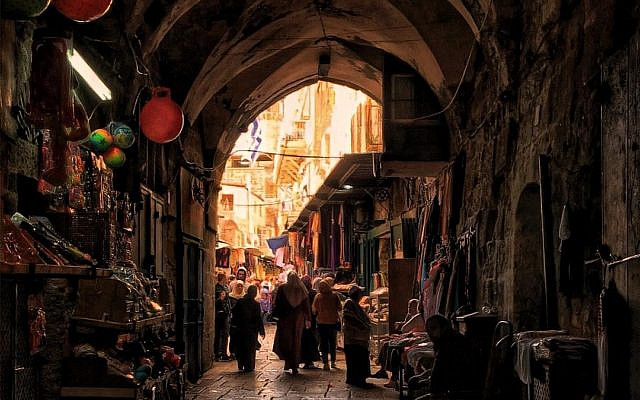 Z. used to live in Queens — he wears baggy pants and a backwards Yankees hat. He says, “Yo, yo” a lot — even when he’s just arranging the wooden camels on the shelf of the store his family owns on Al Wad street in the heart of the Old City.

He is built with smooth arms, and a broad chest, and flicks his cigarette with swagger.

“I needed a big city, yo — just for a little while,” he tells me when I ask him why he left Jerusalem for six years. “I needed some anonymity, you know what I’m saying?”

“I totally understand,” I tell him.

“Nah, my sister, you just got here – you don’t know how bad it is. There is nothing like living in the Old City long-term. I mean, this stuff goes back generations, where our grandparents and our great grandparents were all on top of each other. Just smell the air sometime. Bread and spices and shit when the pipes burst, and sweat – even in the winter. And even behind the walls – they may be made of stone, yo, but you can hear everything. And I do mean EVERYTHING. Every time you flush your toilet, the neighbor hears it and knows what you threw down there – paper towel, toilet paper, if your wife has her period. And then every time your wife starts in on you about how you’re always working and never make time for her and take her places, your neighbor will come over and offer advice. There’s no privacy! And don’t even THINK about having sex with your mouth open in this place.”

“Yeah. Really. It’s bad. That’s why some people drive out to the hills outside the Jewish settlements to do it – especially the teenagers.”

“Yeah, look – sex is taboo in our world. I mean, I swear everyone is thinking about it, but we don’t talk about it. And if you aren’t married, you can’t have it. No way. Even being alone with a girl in a car is a problem – you know, I don’t like to talk smack about my own, yo, but that can get you killed if you’re a woman. So sometimes, Palestinian couples will head out to the settlements and get it on there, you know what I’m saying?”

“Yeah. Naw, they aren’t getting it on with Jews or anything. They just want privacy, to be alone, you know? And it’s safer out there. Even with the soldiers and the checkpoints. They might get arrested, but they won’t get shot by some crazy older brother. See, teenagers are teenagers, and they see things on TV from Europe and America, and, yeah, from Israel, although they won’t admit it, and then they see the Jewish teenagers holding hands and doing stuff, they want to, you know, do it too. They’re teenagers. You were a teenager. I was teenager. I got lucky and went to New York for some of the best years of my life, know what I’m saying? But most people don’t have that kind of money or a rich uncle, so you do what you have to.”

“Yeah, but if you’re planning on doing that, don’t think too loud because people can hear that, too.”

I get the privacy thing. When I moved to Israel, I lived on a kibbutz.

A kibbutz is one part Club Med, two parts mental institution. Israeli intelligence has NOTHING on the kibbutz where generations have lived and loved and worked and fought and slept together — where Moti isn’t talking to Shaul because their great-grandparents were both in love with the same woman.

People notice when you get a new shirt, or cut your hair, or when you’re wearing new deodorant.

I tell Z. all of this and he laughs. “Yeah, but you’re forgetting something, my sister. You got those fields, you got all that space. You have your Israeli ID and your passport and you can go anywhere. We’re stuck. We got nowhere to go.”

“Hey, I’ll give you a tip,” Z. says as he lights a cigarette. “If you’re going to have sex here in the Holy City, do it during the call to prayer. The muezzin is loud, yo.”

I laugh. Z. flicks his cigarette into the street, and lights another one.

And later on in bed that night, in my little room as moonlight pours through the open window, I keep my ears open until I fall asleep. But I don’t hear a sound except the call to prayer echoing over the stones and through the streets of the Holy City.

Excerpted from Jerusalem Drawn and Quartered: One Woman’s Year in the Heart of Christian, Muslim, Armenian, and Jewish Quarters of Old Jerusalem. Copyright 2018, by Skyhorse Publishing, Inc.