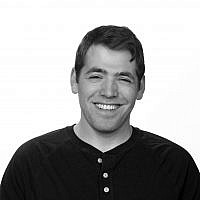 The Blogs
Seth Beckett Mendel
Apply for a Blog
Advertisement
Please note that the posts on The Blogs are contributed by third parties. The opinions, facts and any media content in them are presented solely by the authors, and neither The Times of Israel nor its partners assume any responsibility for them. Please contact us in case of abuse. In case of abuse,
Report this post.

How ironic is it that Rabab Abdulhadi, the infamous San Francisco State University professor who tried to host a talk with a Palestinian terrorist; who claimed that accepting Pro-Israel Jewish students on campus was a “declaration of war against Arabs and Muslims;” who has repeatedly defamed Jewish students who disagree with her personal political opinions as white supremacists, and who has goaded impressionable students into bullying and harassing Jewish and Israeli students and their clubs has accused her administration of being paid off by Zionist organizations to discriminate against her professionally. What a crock.

Riding high on her faculty union support regarding her failed attempt to bring the terrorist, Leila Khalid, to campus in 2020 and a 2018 legal win that found her not guilty of fostering a hostile environment for Jews on campus—a  questionable decision in and of itself considering her leadership in the notoriously antisemitic student group, the General Union of Palestine Students, (GUPS) and an unavoidable correlative relation between her incendiary lectures and events against Pro-Israel students and antisemitic expressions on campus including Nazi and anti-Israel graffiti—Abdulhadi has doubled, tripled, and quadrupled down on her campaign to vilify all Jews but a token few that agree with her. What’s interesting note here is that in 2019, a year later the University settled a lawsuit acknowledging that there was a systemic anti-Jewish bias on their campus and agreed to actively respond. It seems that the 2018 Judge’s assertion that “the allegations that the anti-Zionist views of a faculty adviser to the school’s Arab and Muslim studies program appeared to fall short of establishing that university officials were responsible for an allegedly “hostile environment” that damaged the students’ “educational experience” was either ill-informed at best, or biased and apathic towards SFSU’s Jewish community at worst.

Back to the present, Abduhladi’s main claims in her current lawsuit revolve around broken promises regarding her hiring agreement and that her work on campus has been stifled by bad-faith lawsuits filed by Zionist organizations enabled by the SFSU President and Vice President.

It turns out that she was duped by the dean who hired her into accepting a position at the university under the pretense that she would be granted the funds and departmental support to grow her Arab and Muslim Ethnicities and Diasporas Studies program (AMED.) Not only did the dean who offered her the position not have the authority to make such promises but didn’t even include the university’s president on the official documentation. Though it’s unclear whether this was an intentional ploy by the dean or otherwise, what is clear is that Abdulhadi apparently didn’t read the fine print on official contract agreement with the school which superseded all informal deals, including the one in question.

The more nefarious claim that powerful shadowy Zionist organizations are using their money to harm her career unsurprisingly fits in with her history of anti-Zionist activism and reeks of the 19th century Russian antisemitism which she has publicly endorsed. Recently in a conversation she hosted on Facebook entitled, “Who Owns Jewishness,” she briefly shared her love for Karl Marx’s On the Jewish Question, a text that is likely to have influenced Adolf Hitler’s Mein Kampf, promotes the belief that Jewish people are obsessed with money, secretly control the world, and who’s identity needs to be erased to free the world from their tyranny.

Her evidence of such discriminatory practices amounts to a seemingly about-face made by the President after going on a trip to Israel funded by the local Jewish Community Relations Council, denial of financial support for personal and departmental trips to the Palestinian Territories that included or would include meetings with US designated Palestinian terrorist groups, and the belief that SFSU has a “long history of suppressing Palestinian voices, and that programs like her face a prevailing Islamophobic and anti-Arab and anti-Palestinian mind-set.” Her whole argument conveniently ignores the 2020 SFSU student government’s overwhelming support for a pro BDS resolution, the nigh constant pro-Palestinian expressions made with impunity by the student groups she’s involved in along with her own including nine major events sponsored by the school in the past year alone, not to mention the fact that it was Zoom and YouTube who denied Abdulhadi from platforming Leila Khalid to influence students while the SFSU administration supported her.

This professor is dishonest, unprofessional, and a danger to her students and to SFSU’s Jewish community as a whole. Since her tenure began, Abduhladi’s influence has degraded SFSU into the antisemitic cesspool it has become, subjected its administration to a disgraceful lawsuit forcing an acknowledgment of their failure to protect Jewish students, and has now targeted them with a frivolous lawsuit of her own. Is anyone surprised?

About the Author
Seth Mendel is a senior Philosophy and Theater student at the University of Colorado, Colorado Springs, and the 2021-22 CAMERA on Campus Fellow for the Colorado region.
Related Topics
Related Posts
Comments