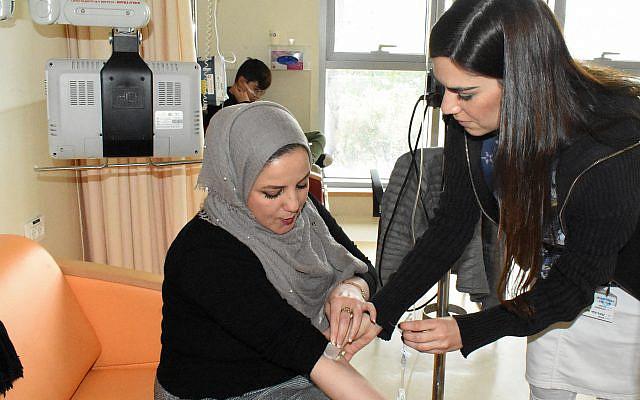 If it weren’t for Gaucher disease, Rania Qwaider of Ramallah, Suheir Sandouka of Beit Hanina, and Rabah Mustafa of Nablus might never have become best friends.

All three women are Palestinian Muslims with Gaucher type 1. Every other Wednesday, they brave traffic jams and security checkpoints to visit Jerusalem’s Shaare Zedek Medical Center — a hospital set up by Orthodox Jews in 1902 — where they receive expensive, yet lifesaving, enzyme replacement therapy (ERT) not available in their hometowns.

For more than a decade, these women have bonded over conversation and laughter while getting their 60-minute intravenous infusions in the hospital’s sixth-floor pediatric day care center.

“I have been coming here every two weeks for 11 years,” Sandouka, 33, told me during a Feb. 20 visit to Shaare Zedek. “It’s exhausting because I have to leave my home and my children, so it affects me emotionally. But then I see my friends here, and I’m happy.”

That Palestinians are afflicted with Gaucher at all may come as a surprise. That’s true even in Israel, where doctors have traditionally seen it as a disease of Ashkenazi Jews — or those of European origin — since roughly 1 in 800 Ashkenazim have some form of the disorder.

“Even though it’s very rare, people think only Jews get Gaucher. But Israeli Arabs have similar mutations as the Jews,” said Majdoleen Joleen Istaiti, clinical study coordinator of the Gaucher unit at Shaare Zedek. 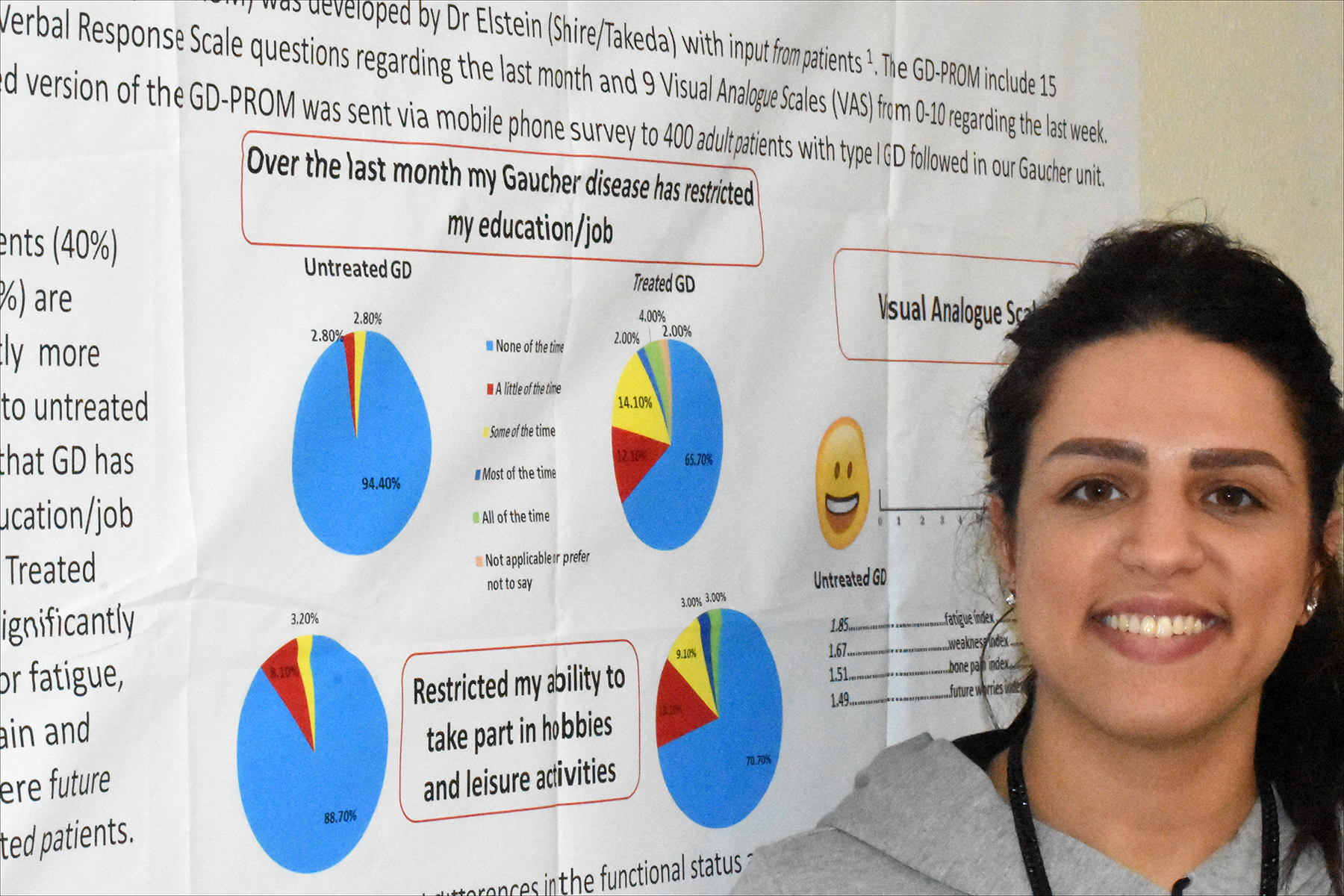 “Those who live in Israel proper can get treatment at home, because they’re covered by kupat holim,” she said. “But in the West Bank and Gaza, they don’t have any access to enzymes, so for those patients, we have to apply for compassionate use from Sanofi Genzyme, Takeda or Pfizer. If they approve it, the companies ship the enzyme here to the clinic and we administer it to them.”

Politics gets in the way of treatment

Istaiti, originally from Nazareth, has a bachelor’s degree in biology from Tel Aviv University. Fluent in English and Hebrew as well as her native Arabic, she was hired by Shaare Zedek’s Specialized Gaucher Unit two years ago to manage clinical trials and work with the unit’s Palestinian patients. They number about 40 of the 900 or so people who are seen there regularly.

“The disease varies in severity depending on ethnicity. Type 2 is very rare; we barely see it anymore. And types 3A and 3B are neurologically more severe than type 3C, but with 3C you have heart calcification,” she said.

Among other things, Istaiti helps translate for the Arabs during consultations with either the clinic’s director Shoshanna Revel-Vilk, MD, or its founder and former director, Ari Zimran, MD.

“The Palestinians are not Hebrew speakers, and most don’t know English either,” she said. “They’re supposed to come every two weeks, but when there are security problems at the checkpoints, they aren’t allowed to cross.”

In addition, a Jordanian child comes to Shaare Zedek once every six months from Amman or an infusion and a half-year supply of enzymes; the clinic also treats a Palestinian child living in the Gulf emirate of Qatar.

Yet sadly, Shaare Zedek doesn’t work with Palestinian physicians; the complexities of the Arab-Israeli conflict have gotten in the way. 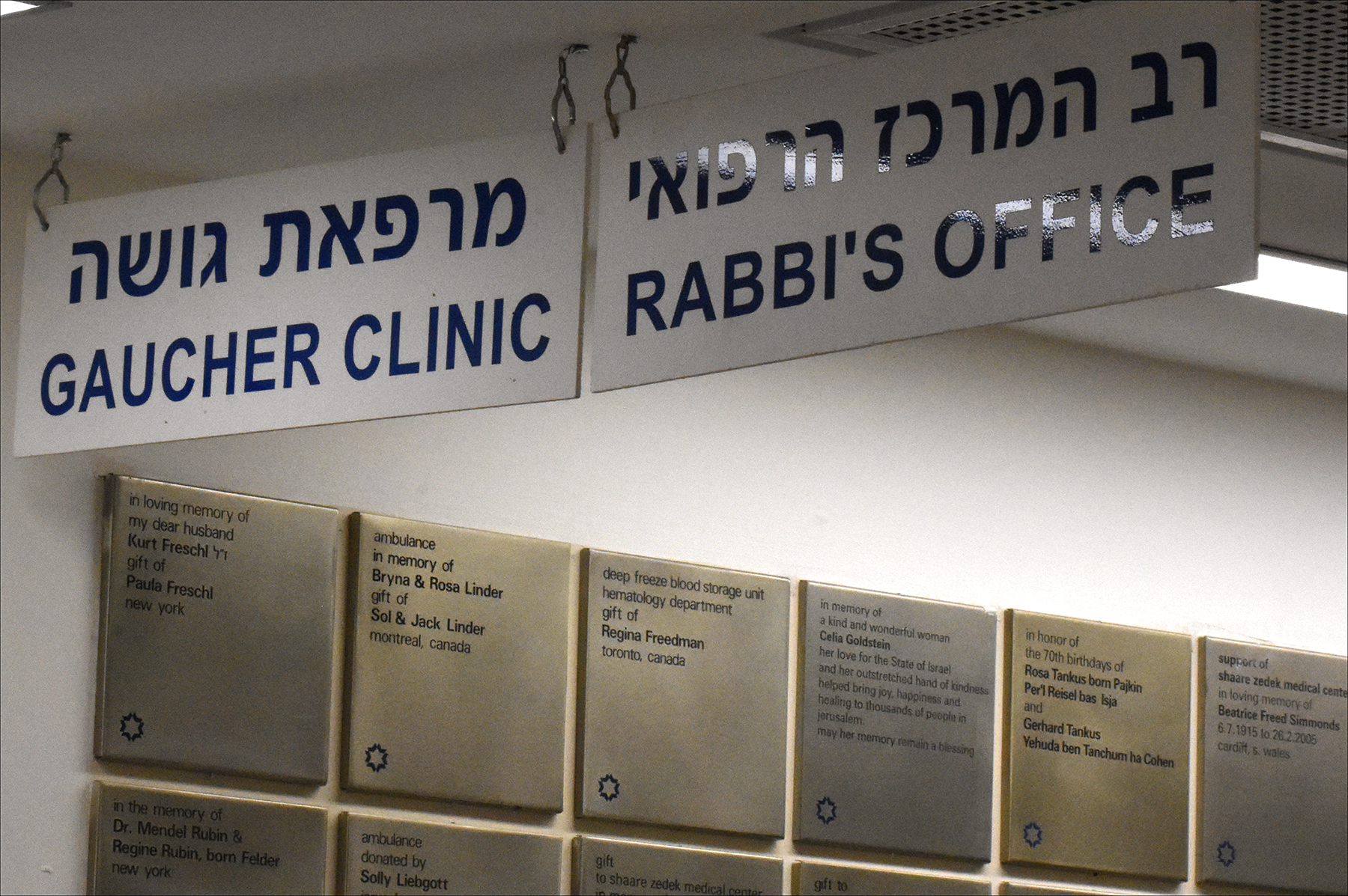 Entrance to both the Gaucher disease clinic and the rabbi’s office at Jerusalem’s Shaare Zedek Medical Center, which serves Jews as well as Arabs from Israel and the territories. (Larry Luxner)

“They don’t want to collaborate on anything,” Istaiti complained. “Most of our patients with type 3C come from Jenin and three surrounding villages. We wanted to do a screening in order to have a database so two carriers wouldn’t marry each other, because there’s a 25% risk their children may die and the enzyme doesn’t treat the heart problem. I tried to contact these doctors from the moment I started working here, but no one wanted to collaborate with me — even though I’m also Arab and we speak the same language.”

In November 2019, Istaiti visited one of those villages for the first time, and now plans on a bigger collaboration jointly funded by Centogene and Takeda. She’ll be assisted not by local authorities but by the families of people who have died of the disease.

ERT coverage depends where you live

Politics don’t matter much to Qwaider, 38, who showed up earlier this month at Shaare Zedek wearing a pink hijab. A Gaucher patient with type 1, she was born in Lebanon and was diagnosed in 2004. A former employee of the statistics office of the Palestinian Authority, she’s been coming here for the past 14 years.

“The disease doesn’t affect my personal life, but it does affect my education,” said Qwaider, who receives Cerezyme (imiglucerase), an ERT developed by Sanofi Genzyme. “I had to have an operation [prior to coming to Shaare Zedek] to remove my spleen. My abdomen is big and I’m not happy about that.”

Her friend Sandouka has been married for 17 years and is the mother of two boys and two girls.

Since she lives in Beit Hanina — an Arab suburb of East Jerusalem rather than a city in the West Bank — Sandouka is covered by kupat holim. That entitled her to receive a monthly shipment of 13 vials of Elelyso (taliglucerase alfa), which is manufactured in Israel by Protalix Biotherapeutics in collaboration with Pfizer. 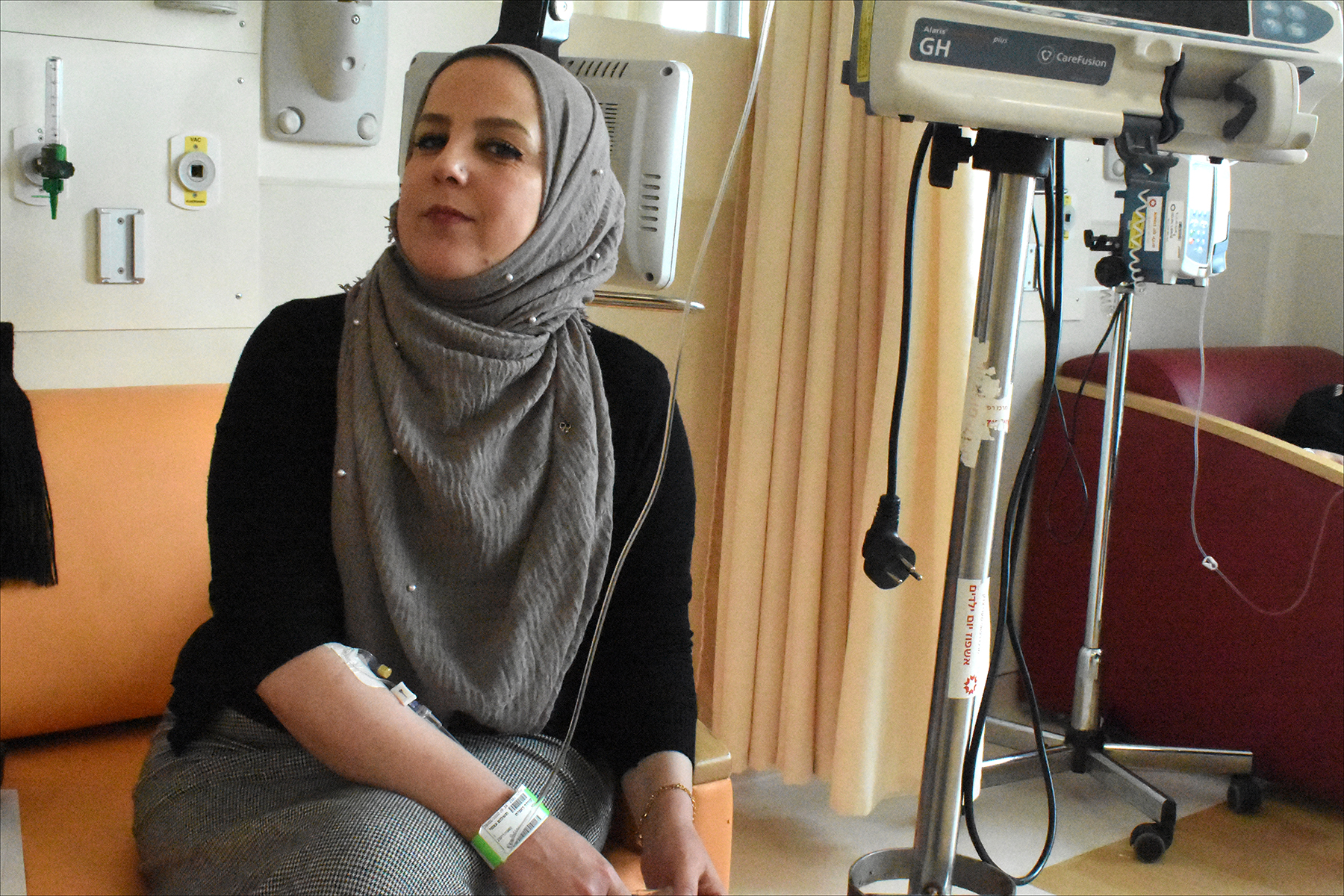 Rania Qwaider, 38, a Palestinian woman from Ramallah with Gaucher disease, has been coming to Jerusalem’s Shaare Zedek Medical Center for infusions for the last 14 years. (Larry Luxner)

That’s enough for two or three infusions. Israel’s health insurance system pays the NIS 53,000 cost, and Sandouka brings the vials with her from her local pharmacy.

For those who live under Palestinian control, however, Shaare Zedek covers the drug but not the infusion itself, or the pediatric day care. That costs NIS 1,500 per visit; some patients pay that out-of-pocket, while others have insurance.

“I discovered I had Gaucher after I had my first son. My platelet count was 48; it should have been 120-300,” she said. “I was told I’d have bleeding and that it would affect me in the future.”

An all-day journey to Jerusalem

To get to West Jerusalem, she has to leave Salfit — a village just outside the northern West Bank city of Nablus — by 6:30 a.m. Two hours later, she arrives at the Qalandiya checkpoint, which is usually clogged with Palestinians entering Israel.

By the time Mustafa arrives at the hospital, it’s almost noon. Following her Elelyso infusion, she repeats the exhausting process in reverse and generally arrives home no earlier than 5 p.m.

Mustafa is married and with four children, but has suffered five miscarriages because of her low platelet count and excessive bleeding. She’s known she has Gaucher since 2004, but didn’t start receiving treatment until 2009, when her doctor in Nablus referred her to Shaare Zedek. 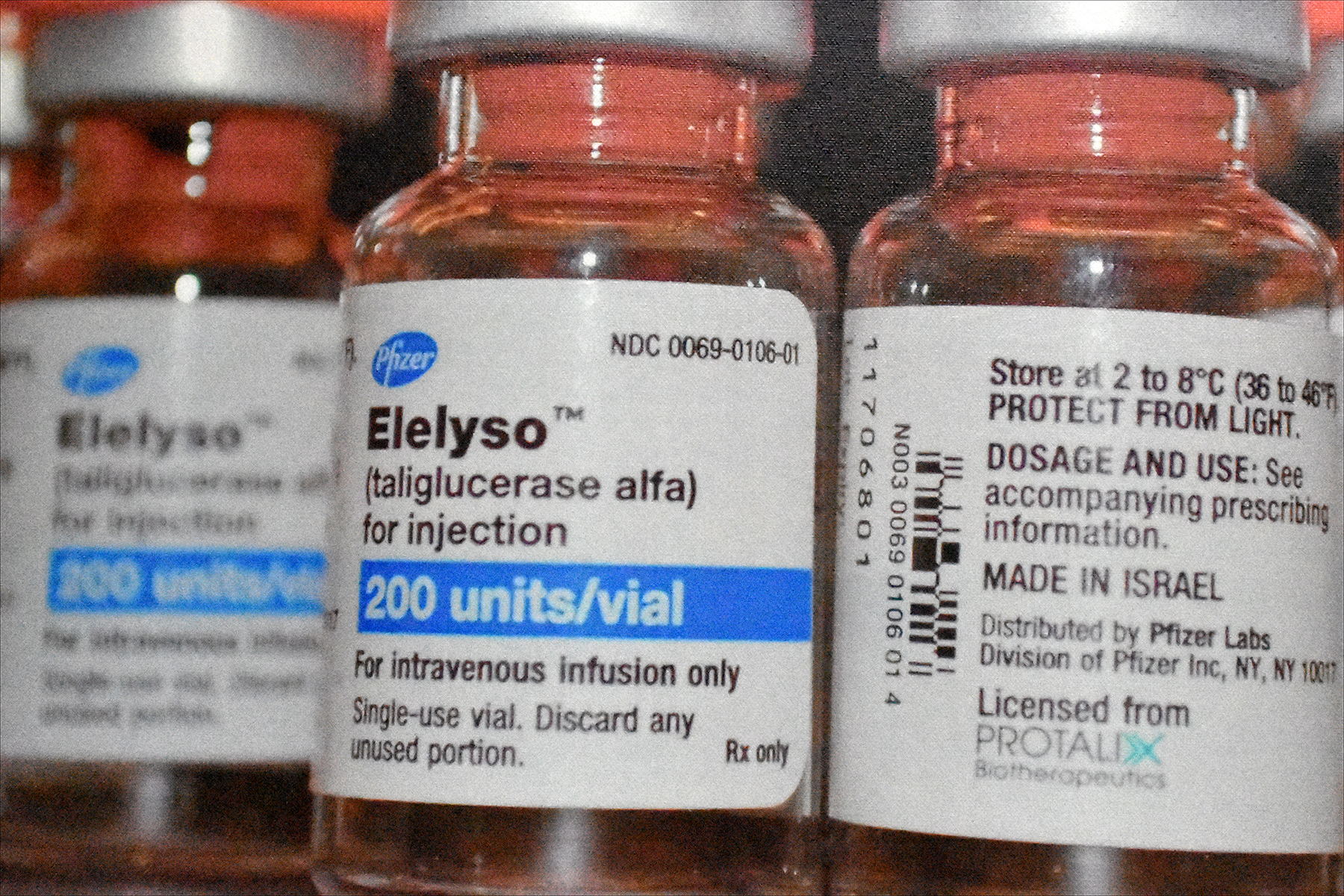 Pfizer’s Elelyso (taligucerase alfa), made in Israel, is given to Gaucher disease patients at Shaare Zedek Medical Center in Jerusalem. (Larry Luxner)

Also receiving treatment at the sprawling hospital are siblings Malak and Muhammad Karami of Hebron.

Malak, 19, was born with an enlarged liver and spleen, and suffered severe bleeding throughout her childhood. At first, doctors in her village thought she had hemophilia; they then suspected Niemann-Pick disease. At the age of 8, she was sent to Shaare Zedek to have her spleen removed; it was here where she was correctly diagnosed with Gaucher type 1.

Since 2014, both she and Mohammad, 15, have been coming here once every other Thursday for treatment. They usually sit in an alcove behind a curtain as they receive their infusions of Elelyso while looking out at the hospital parking lot below. Malak is studying physical therapy at Hebron University, and her younger brother is in ninth grade.

The Gaucher clinic at Shaare Zedek has grown since its founding in 1989 to become the world’s largest specialized facility for Gaucher disease; it currently employs 10 full-time staffers.

It’s a particularly important clinic in Israel, given that Gaucher is over 100 times more prevalent among Ashkenazi Jews than in the general population.

Yet the language barrier has not been easy. Before Istaiti’s arrival, Zimran and other doctors would often rely on Arabic-speaking nurses and janitors to communicate with non-Hebrew-speaking patients — not an ideal solution, especially when dealing with complex medical terms. 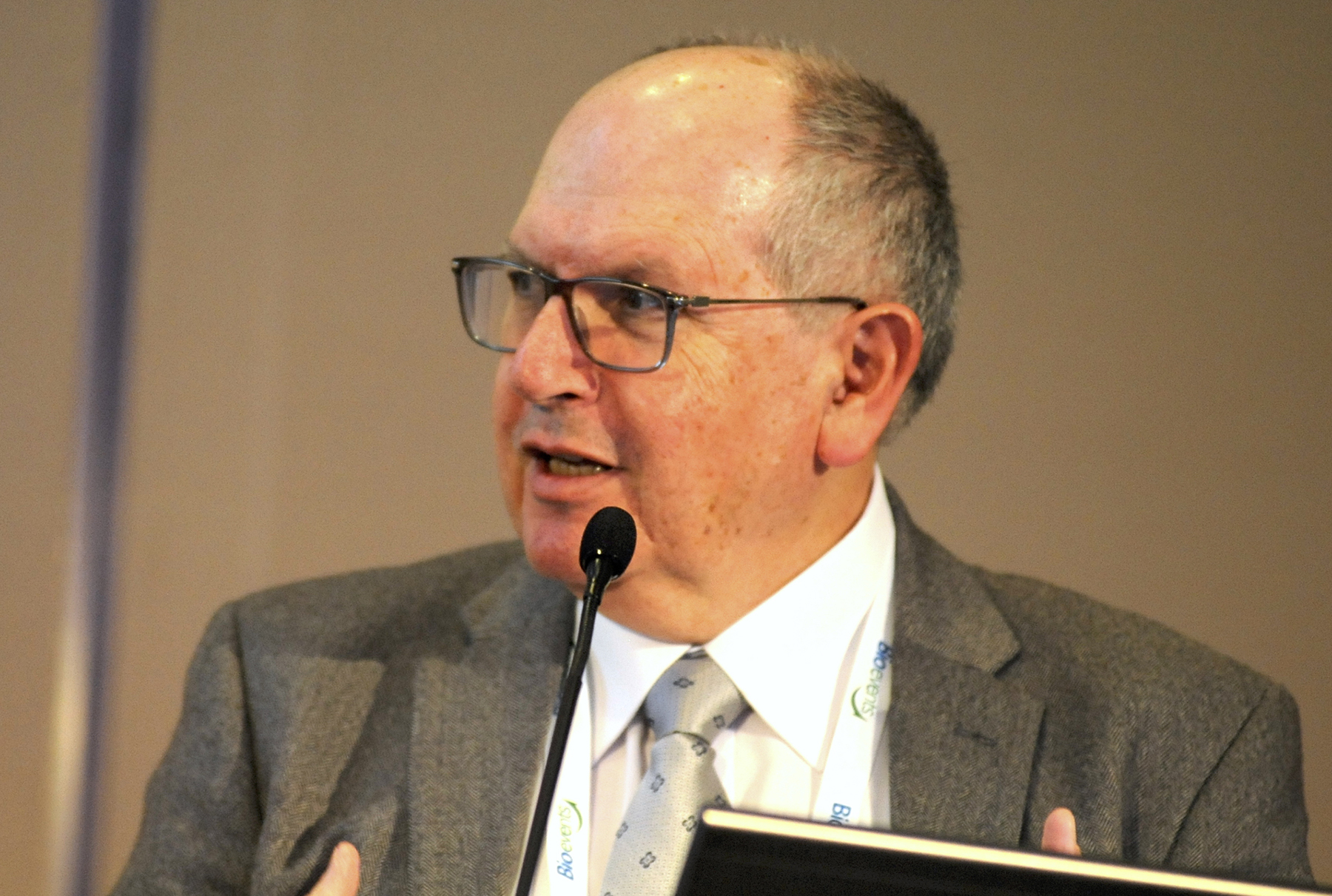 “We wanted to do a screening program for Gaucher in the villages around Jenin, but we didn’t get any willingness on the other side,” Zimran told us. “They treated us with a high degree of suspicion, and maybe also reluctance — as with the ultra-Orthodox Jews — to spread potential rumors that somebody in the family was sick.”

Not all frustrations are political. During our interview, Istaiti received an email from a major drug company rejecting her request for compassionate use of its ERT for a 9-year-old girl from Gaza. The child, who has type 3C, has already had three surgeries and heart valve replacement.

“We’ve made treating Arabs a priority because they have the second-highest prevalence in Israel after the Ashkenazim — much more than the Sephardim, the Yemenites or the Ethiopians,” said Zimran. “And it’s for the same reason: a high degree of consanguinity. So if you get one mutation in a village, in a couple of generations you’ll see lots of patients.”

Among the 10 clinical trials involving Shaare Zedek’s Gaucher unit is a collaborative research project now underway with Pfizer. In 2012, the U.S. Food and Drug Administration approved Eleyso to treat adults with type 1; in 2015, that approval was extended to children with type 1.

But a study looking at Elelyso in type 3 patients will soon begin, involving 15 participants — four at Shaare Zedek from the West Bank, Jordan and Qatar, and the remaining 10 at clinics in Turkey and India.