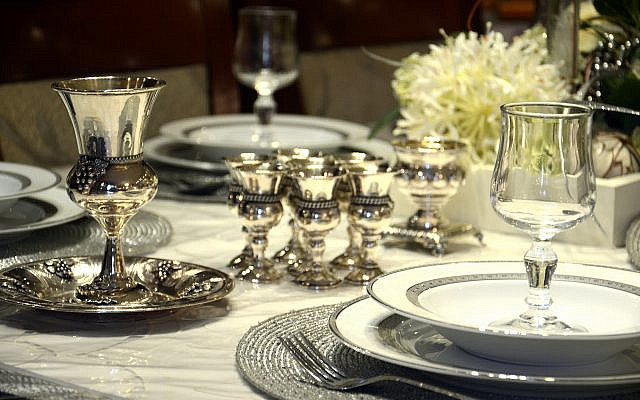 According to the fixed Jewish calendar, during a non-leap year, the reading of Parshat Tzav will coincide with the Shabbat immediately preceding the holiday of Passover. This Shabbat is known as Shabbat HaGadol – The Great Shabbat. There are many explanations cited as to why this Shabbat has been bestowed the title “Great.” In his work The Book of Our Heritage, Rabbi Eliyahu Kitov explains one of the many reasons for this distinctive name. He writes:

Many miracles were performed for the children of Israel on this first Shabbat HaGadol. The Torah commanded to take a lamb and tie them to the bedpost. When they did so, their Egyptian neighbors observed and asked: “What is the lamb for?” The children of Israel answered: “It is to be slaughtered as a Pesach sacrifice as God has commanded us.” The Egyptians, for whom the lamb was a deity, gnashed their teeth in anger but could not utter a sound in protest (The Book of Our Heritage, pg. 495)

According to Rabbi Kitov, the great occurrence was that the Egyptians were unable to stand in the way of the nation heeding God’s commandment of the Passover offering. Today, almost 3,000 years later, the Shabbat immediately preceding the holiday of Passover is still referred to as Shabbat HaGadol (The Great Shabbat) in remembrance of this great event.
While the answer outlined above is informative, it still begs the question: With so many other remarkable miracles surrounding the Exodus of Egypt — the Ten Plagues, the Splitting of the Sea – does it not seem peculiar to bestow the title “great” to so seemingly a minor incident? At face value, it pales in comparison to the majestic and undeniable supernatural miracles that both preceded and followed it.

In answer to this question, Rabbi Levi Yitzchak of Berditchev offers a deeper dimension, shedding light on the true greatness of the event and the courage it takes to act according to God’s will in the face of adversity. He explains that the “greatness” was not simply that the Egyptians acquiesced to the situation, but more significantly, it was in the fact that the Jewish people as a nation were able to tap into their reservoir of strength and heed God’s commandment of Korban Pesach after centuries of enslavement. He writes:

When the Jewish people fulfilled God’s command to take the lamb, they did so with greatness of mind. Meaning, they did not have any dread or fear of the Egyptians…even though they planned to slaughter their “Gods” (Kedushat Levi, Vol. I pg. 300).

After experiencing generations of enslavement and submission by the Egyptians, somehow, the people of Israel mustered the strength and “greatness of mind” to defy their masters. That is simply nothing short of miraculous.

And for our times, the miracle of that “Great Shabbat” holds tremendous relevance for contemporary Avodat Hashem, the fulfillment of one’s religious and spiritual obligations. It comes as a comfort to know that the trait of “greatness of mind” is deeply embedded within the character of the Jewish people. Unfortunately, over the course of history, we as a nation have experienced the most trying of circumstances. Far too many times, our resolve and commitment to religion and unique way of life has been tested in the face of the truly unbearable. Centuries of persecution, pogroms, and the Holocaust could not extinguish the Jewish spirit. This determination and resolve to follow God’s commandments, born during the time of the first Korban Pesach at Exodus, is perhaps our greatest inheritance.

The well-known Talmudic story of the martyrdom of Rabbi Akiva at the hands of the Romans serves as a prime example of this idea.
The Talmud recounts:

When Rabbi Akiva was taken out to be executed, it was the time for the reading of the Shema, and while they combed his flesh with iron combs, he was accepting upon himself the kingship of heaven. His students said to him: “Our teacher even to this point?” He replied to them, all my days I have been troubled by the verse in the Shema “Love God your Lord with all your soul”, i.e. even if He takes your soul. When will I ever have the opportunity to fulfil this verse? Now that I have this opportunity, should I not fulfil it? (Tractate Berachot 61b)

This Talmudic passage serves to extol the virtue of Rabbi Akiva, who even upon his death reached out to sanctify God’s name. Even more striking is that the Talmud states “it was the time for the reading of the Shema”, to share the profound lesson that Rabbi Akiva did not recite the Shema in a bout of spiritual fervor due to his impending death, but rather recited the prayer because it was the appropriate time of day to do so. And Rabbi Akiva — like so many Jews before and after him — did not allow the oppressive circumstances to stand in the way of his Avodat Hashem.

Similarly, some 75 years ago, The Piacezna Rebbe, Rabbi Kalonymos Kalmin Shapira, continued to teach Torah and encourage his followers to greater levels of religious observance and commitment amidst the ruins of the Warsaw Ghetto. During his weekly sermon on Parshat Shemot, January 10, 1942, he writes:

Now, while every head sickens and every heart grieves, some say that this is not the time to talk of piety, repentance, or awe- whether of this sort or that—that it is enough just to observe the simple, practical commandments. They are mistaken, for two reasons. First, because even now we must worship with all the means at our disposal, with every type of worship. The second reason which argues quite to the contrary is this: Any person practicing spiritual reflection…and always looking inside himself…eventually experiences the most profound joy. After periods of introspection such as these, he begins to feel elevated…and tastes the sweetest, most rapturous essence of awe, describe in the Sabbath hymn “God I desire.” It is a supernal awe, which elevates the man. (Sacred Fire, Torah From the Years of Fury 1939-1942, pg. 259-260)

I was privileged to hold in my hands the creative expressions of such spiritual tenacity while working on the Valmadonna Trust Collection at the National Library of Israel. During my daily encounter with this collection, I came across a Tanach printed in the 1500s (8 years after the Spanish inquisition), records of censorship of Jewish books in Italy by decree of the various Popes, and prayer books and bibles printed by Jews surviving the ravages of war in Shanghai in 1944. The Valmadonna provides a snapshot of close to 450 years of Jewish history, and its ongoing scholarship stands as a testament to the unwavering commitment of the Jewish people to proliferate the Torah way of life.

The message of Shabbat Hagadol is all the more urgent in these trying and tragic times of uncertainty with the rapid spread of the Covid-19 virus and its impact on our lives. We must remember that the Jewish people are a nation of great inner strength and sense of purpose. On this Shabbat Hagadol, may we merit to follow in the footsteps of our ancestors, call upon the “greatness of mind” within, and further develop in our Avodat Hashem (Service of God) no matter the circumstances.

About the Author
The Author is a Jerusalem based Rabbi and Jewish Educator. He is a Lieutenant in the IDF reserves where he serves as a battalion Rabbi, and is the author of the book "A People, A Country, A Heritage-Torah Inspiration from the Land of Israel."
Related Topics
Related Posts
Comments