Shabbat Shalom to everybody, everybody but ….

To John Kerry who told congress that Iran’s “Death to America” chants doesn’t mean that they want to kill us.

To John Kerry who said “at no time was he made aware of an Iranian plan to destroy America”. Oh, you mean like a country trying to procure nuclear weapons, and ballistic missiles in which to launch them? Naaaaaaaaaaaaah

To President Obama who while in Kenya who said that he would win the Presidency if he ran again. Of course he didn’t say in which country.
To the Professor of philosophy at the University of Warwick who has launched a new study into what makes people believe in conspiracy theories. Maybe it has something to do with the tri lateral commission, the Bilderberg’s, and space aliens invading Detroit.

To those on the left who say that if you don’t support the bill then you are supporting war and “big money” people who don’t want peace with Iran.

To Iran after the signing the bill, has gone on a shopping spree buying billions of dollars of advanced weaponry from big money people like Russia, and China.

To the UN who has cast Israel as the Worst Violator of Economic and Social rights in the world .No mention of Hamas or Syria. After the resolution Syria’s Ambassador (who has “violated” the right to be alive to over 300000 of its own citizens) took the floor and condemned Israel.

To the geniuses on John Kerry’s negotiating team that let Iran get their own soil samples in which to test to see if they are cheating. …
To John Kerry who admitted that many American. and or Israelis may still be killed after this deal is signed.

To John Kerry whose daughter married an Iranian doctor and had Mohammed Zarifs (the top Iranian nuclear negotiator) son as best man in 2009.

To John Kerry who apparently never learned the definition of conflict of interest after he voted on a bill that helped a company (res med) that he was a large stock holder in. (see Reuters “thanks in part to John Kerry’s efforts”)

To all those in the Jewish community who were more upset with Mike Huckabee’s holocaust comments than the actual potential of a new holocaust by Iran. Which is what he was trying to say.

To President Obama who gave the go ahead to Turkeys Muslim Brotherhood supporter President Erdogan, to go after ISIS (which has been getting weapons, and logistical help primarily through Turkey). Erdogan promptly started bombing his real arch nemesis the Kurds.

To President Obama who on a conference call to left wing activists regarding the Iran deal, constantly spoke against “opponents” in thinly veiled attacks on the Jewish community. The attacks included shadowy accusations of “these are the same people who got us into the war in Iraq” (which was proven untrue).
“Well financed lobbyists” … Jews,
“Big check writers to political campaigns” … Jews
Billionaires who happily finance super PACS … Jews, Sheldon Adelson
A not so subtle reference to Aipac who is spending 20 million in ads against the Iran deal. Even the forwards (a left leaning Jewish newspaper) staff writer Nathan Gutman, said that the community was feeling “uneasy” about the call. For this publication in regard to Obama “uneasy”, is an earthquake of dissention.
All of these helped him get elected, and reelected to office.

To the Jewish federations across the United States where only 8 federations to date have come out strongly against this bill.

To the dentist in Minnesota who apparently spent over $50000.00 to travel to Zimbabwe and kill a beloved lion named Cecil. He could have spent less than 50 dollars to go to a zoo and see one …
To the Obama administration who has started an “investigation” into the killing, presumably after they continue to investigate, the loss of thousands of Lois Lerner IRS emails, Hillary Clintons email server, and a host of other less important matters than the killing of Cecil .All of these are in fact related due to someone … lion.
To the University of New Hampshire who published the Bias Free Language Guide, so that we don’t unknowingly cause “micro aggressions” to people who apparently are “micro “offended by them.

To the “Bias Free Language Guide, “for banning the words, Lesbian and American, a term best avoided, because it fails to recognize South America.
To the Bias Free Language Guide who finds the words mothering, fathering, homosexual, and other words “problematic”.
The guide will be mailed out to ….. Apparently, nobody so that they won’t offend anybody….

To all those who read this instead of watching Gilligan’s island re runs I wish you Shabbat Shalom.

NO SHABBAT SHALOM FOR YOU 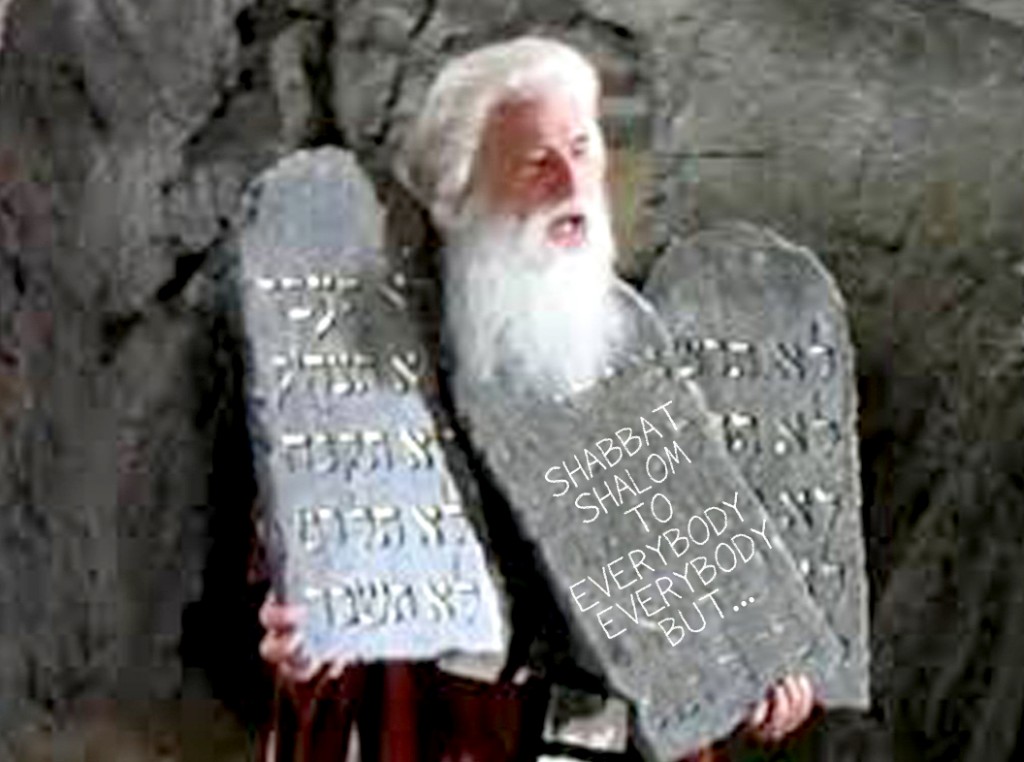