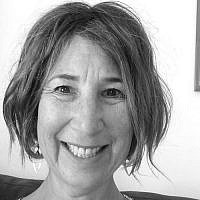 The Blogs
Karen Zivan
Apply for a Blog
Please note that the posts on The Blogs are contributed by third parties. The opinions, facts and any media content in them are presented solely by the authors, and neither The Times of Israel nor its partners assume any responsibility for them. Please contact us in case of abuse. In case of abuse,
Report this post. 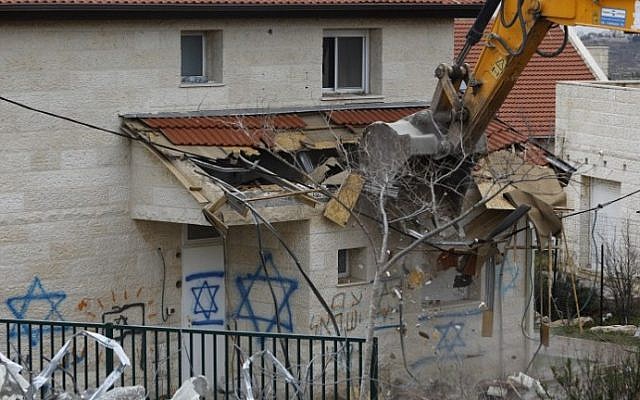 A bulldozer destroys a home built on private Palestinian land in the West Bank settlement of Ofra on March 1, 2017. (AFP Photo/Menahem Kahana)

I am a school psychologist for the district of Matei Binyamin, an area that houses more than 42 yishuvim and has suffered many emotional tragedies lately.

Yesterday, I was in Ofra, working with a team of psychologists and social workers to help alleviate any trauma. I worked with a partner, and the two of us were assigned to the Dolphan home, one of the nine homes to be evacuated. I write this blog post to explain what I experienced as I spent the morning in the Dolphan home, before we were evacuated.

The home had been emptied, since the family of eight (six sons) had chosen to pack up and move to their new house in Ofra before the evacuation. The walls were slightly graffitied with משפחת דלפן, as if to mark the home as a place of tribute to the family and not a political billboard.

There were at least 60 boys and men singing in the main room, and teenaged girls and family members huddling together hugging and crying. Shira Dolphan, the mother, was upstairs on the balcony breathing in some air, and watching the police and soldiers — a sea of blue and green — approach her street. There were at least 1,000 of them.

When I found Shira on the balcony, I gave her a hug. I was teary and I felt bad to have her see me so sad; I told her how sorry I was. I told her I was a psychologist from the district and if she needed anything for herself or for her children I would be in the house. I told her that I’d heard her husband was in America. David was there, she explained, because as a paramedic, one of his many heroic acts included saving the life of a terrorist. He was now in Florida speaking and presenting a movie that explained how Israelis respond to terrorist attacks. The evacuation was supposed to have been last month, so he had not canceled his trip, thinking it would be after the evacuation. He was returning later in the afternoon, and was heartbroken to be apart from his family.

There was a heaviness in the area as the police came closer, and there was an emotional atmosphere that Shira and I both felt: the personal struggle of deciding where to spend the last moments — to be downstairs with everyone, or to stay on the balcony and soak in, even for this short moment, the peaceful view of the mountains, to see the familiar street from a familiar place, and to remain silent.

Soon, from the windows of the kitchen and living room, there were only blue shirts, and the light from outside was being blocked by police. Noise from outside made it impossible to ignore the inevitable.

Shira stood on the steps inside the family home and spoke to everyone. She thanked them for their support and for continuing to keep her family house a place of holiness. She spoke eloquently and with conviction, explaining so much: that her home and family are symbols of life, and love and peace; how her six boys will one day serve Israel in the IDF, and how proud she will be of them; why her husband was not home, and how it was a “z’chut” (an honor) for him to have saved the life of the terrorist. She doesn’t believe in hate.

Shira also explained that she dressed in her finer clothes because she was not going to fight; she asked for no violence, no cursing, no hitting when the police come in. She understood that if people wanted to sit down and to be taken out, it was their right, but she begged everyone not to become violent. She said if we truly believe what we sing in “Ani Ma’amin,” we will believe that Hashem has a plan. She asked that Hatikvah be sung.

We sang “Ani Ma’amin” together, both women and men crying. Fathers and sons held one another tightly, eyes closed and singing loudly with passion and plea, girls crying and singing. Truly, it was beautiful, sad, yet inspiring. With such dignity and love around me, I felt blessed to be there.

Police came in. They seemed to apologize for what they needed to do — I didn’t hear them, but I saw some handshakes, and then they started to ask if men and boys wanted to walk out or be carried out. Female police carried girls out. Some walked out, head in hands, feeling shame, feeling sadness, feeling hopeless, not knowing what else to do.

My partner and I continued to hand out water and check for trauma. People came out emotionally exhausted, and sat on the curb, crying, shivering, shaking. They had just experienced a shocking, surreal experience.

One young boy was being taken out by police and was crying and wrestling for the police to let him go. I asked my partner if he felt he should maybe step in to help them. “I’m not going to help them evacuate anyone.” He hadn’t realized that I was actually asking if he should help really for the boy’s sake, since the boy was suffering. And at that moment I realized that all of us were confused. As much as any of us wanted to help, we didn’t really know how.

About the Author
Karen Zivan is a mother of five boys. She is a practicing AEDP and School Psychologist who practices therapy with teens, adults, and parents. Karen is a Yoga Teacher who enjoys traveling around the world to donate yoga. In Israel she donates yoga to soldiers and to her community in Hashmonaim.
Related Topics
Related Posts
Comments