The Blogs
David E. Weisberg
Apply for a Blog
Please note that the posts on The Blogs are contributed by third parties. The opinions, facts and any media content in them are presented solely by the authors, and neither The Times of Israel nor its partners assume any responsibility for them. Please contact us in case of abuse. In case of abuse,
Report this post. 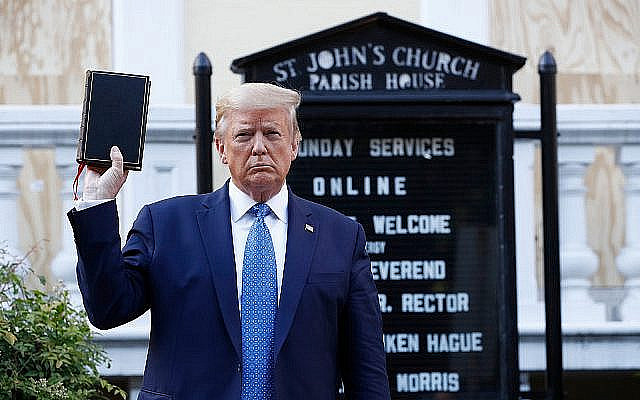 US President Donald Trump holds a Bible as he visits St. John's Church near Lafayette Park across from the White House in Washington, June 1, 2020. (AP/Patrick Semansky)

Rabbi Robert Wolkoff has written an op-ed for the ToI entitled “Sacred Ground”.  The ToI has made it a Featured Post.  You ought to read it.  It’s quite interesting, both for what it says and what it doesn’t say.

The Rabbi tells us that, after years of struggling against impulses to attack Pres. Trump’s character and to stay away (at least in the synagogue) from partisan politics, he has given up the struggle.  Why now?  Because the president was photographed holding up a Bible while standing in front of a historic church near the White House.

That photo made the Rabbi darn angry.  In his own words: “[W]hen I saw the president unleashing uniformed police to use tear gas, pepper spray, concussion grenades, and raw physical violence to disperse peaceful protesters from a church, in order to stand on that sacred ground and raise a Bible in his hand for a perverse photo op — a photo op! — when I saw that, I had had enough.”

When the Rabbi says that police used raw physical violence “to disperse peaceful protesters from a church,” any competent speaker of American English would understand that to mean that the police went inside the church, found people peacefully protesting in the church, and then violently ejected them from the church.  But that is not what happened, and there is not a single news report that supports that version of events.  The protesters who were forcefully dispersed were all in the street, none were in the church.  Moreover, at some point before the so-called “photo-op,” one or more arsonists had started a fire in the church basement.  (The Rabbi doesn’t mention the fire.)  So, perhaps the Rabbi’s “perverse photo op” was understood by the president as a symbol of the federal government’s determination that lawless arsonists will not be permitted to destroy property, and specifically property that is “sacred ground” and thus integral to our First Amendment right to the free exercise of religion.  Perhaps.

The Rabbi also seems to be especially offended by the fact that Mr. Trump was pictured with a Bible in his hand, even though (the Rabbi quite snidely implies) Trump has committed adultery.  I wonder if there are any photos of people holding Torah scrolls—maybe even one of the Rabbi.  Are we to understand that none of those people (including the Rabbi) have ever sinned?  I wonder.

The Rabbi emphasizes that black people have been murdered during the Trump presidency.  But does he believe that during, say, the Obama administration no black people were murdered?  The federal government does not have primary responsibility for preventing or prosecuting murder, regardless of the victim’s race.  The states do.  What point is the Rabbi trying to make, if any?

The Rabbi says that Pres. Trump doesn’t understand that we are all made in G-d’s image.  I don’t know how he would know that, unless he had a confidential conversation with the president.  I doubt that he did.  Or, perhaps the Rabbi really has zero knowledge of the president’s inner beliefs.  But the Rabbi goes on to say that the president has “made race-baiting the core of” his administration.  That claim does not implicate Pres. Trump’s beliefs.  But surely it does require some evidence of its truthfulness.  What evidence does the Rabbi provide?

One would think that the Rabbi would have a bunch of examples where the president made negative, derogatory, and plain old nasty remarks about black people.  But the Rabbi provides not even one specimen of such a remark.  Instead, the very first piece of evidence in support of the “race-baiting” claim is this: “We all know, Mr. Trump, that not all your supporters wave the confederate flag. But we also all know that all who wave the confederate flag are your supporters.”

That is an interesting argument.  The suggestion is that anyone who waves a Confederate flag is (a) a Trump supporter, and (b) a racist.  Really?  Everyone who, for example, wants to preserve Confederate monuments (and who the Rabbi doubtlessly categorizes as Confederate-flag-wavers) is a racist?  That’s a pretty big leap, but not too big for the Rabbi.

The Rabbi makes much of the fact that, on June 1, in a call with the nation’s governors, Trump repeatedly said, “You have to dominate.”  We all know that the president often uses crude, offensive language, but perhaps a little context is in order.  That phone call was made after the nation had experienced numerous nights of looting and arson.  Moreover, just three days prior to that call, on May 29, a uniformed federal officer named Dave Patrick Underwood, who was guarding a federal court house in California, was gunned down and killed in a drive-by shooting that also injured a second federal officer.  Officer Underwood was a black man.  His name does not appear in the Rabbi’s op-ed.

I could go on, but there reaches a point where we’re breaking a butterfly on a wheel.  The Rabbi clearly believes that fulminating is the same thing as arguing.  He’s very good at multiplying vituperative expressions to hurl at his perceived enemy: “divisive administration,” “violent bigotry,” “dog-whistles about the 2nd Amendment,” “resentment and paranoia,” “pathetic souls,” “schoolyard bully,” “white privilege,” “battle against fascism,” “glorification of force,” “lust for dominance,” “subversion of truth,” etc.  What he’s not very good at is presenting logical arguments that provide any justification for the well-nigh hysterical tone of his assertions.

Shakespeare had Hamlet refer to a tale “full of sound and fury, signifying nothing.”  Did he have an advance peek at the Rabbi’s op-ed?

About the Author
David E. Weisberg is a semi-retired attorney and a member of the N.Y. Bar; he also has a Ph.D. in Philosophy from The University of Michigan (1971). He now lives in Cary, NC. His scholarly papers on U.S. constitutional law can be read on the Social Science Research Network at: https://papers.ssrn.com/sol3/cf_dev/AbsByAuth.cfm?per_id=2523973
Comments