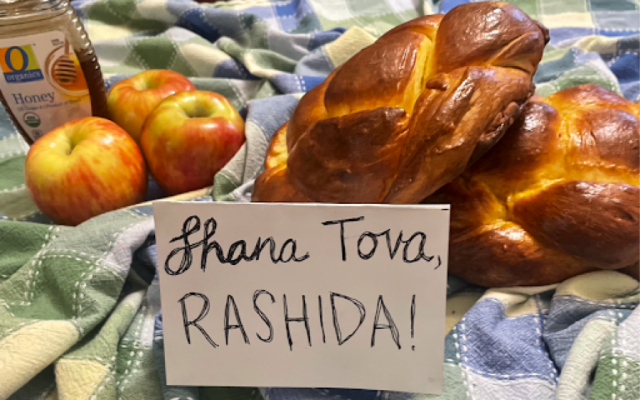 Courtesy of If Not Now

You may have heard about Rep. Rashida Tlaib’s recent statement to Americans for Justice in Palestine Action: “It’s become clear that you cannot claim to hold progressive values yet back Israel’s apartheid government. And we will continue to push back and not accept that you are progressive except for Palestine.”

Several members of the Democratic caucus, along with Anti-Defamation League CEO Jonathan Greenblatt, challenged Tlaib. Rep. Debbie Wasserman Schultz went so far as to say that “the outrageous progressive litmus test” proposed by Tlaib “is nothing short of antisemitic.”

Nevertheless, Tlaib has her defenders, even among American Jews. For example, one of the young anti-Zionists of the leftist group, If Not Now showed her support with an email blast. It read, in part: “I spent yesterday running around my kitchen, hoping that there was enough time for my challah to rise before rushing to Capitol Hill. When the challah was ready, a group of us rushed over to the Rashida Tlaib’s office to greet her staffers and wish them Shana Tova, a happy Jewish New Year. Why did I do this? Because when Rashida is unfairly under attack, I feel obligated as a Jew to stand with her. Rashida told the truth this week when she said, ‘You cannot claim to hold progressive values, yet back Israel’s apartheid government.’”

But this is what it’s come to: Among a growing number of young American Jews, condemnation of Israel is the sine qua non of holding progressive values. And they look to Rashida Tlaib to lead the way. Somehow, they are not bothered by Tlaib’s use of antisemitic tropes, such as her claim that American supporters of Israel “forgot what country they represent,” which promotes the idea of Jewish dual loyalty. Or her talk of “people behind the curtain” exploiting victims “from Gaza to Detroit.” Nor do they object to Tlaib’s defense of Ilhan Omar’s tweet that “it’s all about the Benjamins.” And they seem unconcerned that Tlaib is the only member of Congress to call for an end to the Jewish state. In fact, that is exactly the result that If Not Now would like to see.

Let’s hope for something better in the coming new year.

About the Author
Paul Schneider is an attorney, writer and member of the Board of Directors of the American Jewish International Relations Institute (AJIRI), an affiliate of B’nai B’rith International. He lives in Bethesda, Maryland and frequently travels to Israel.
Related Topics
Related Posts