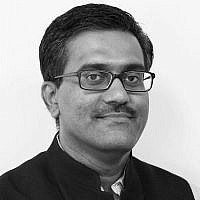 The Blogs
Sameer Patil
Apply for a Blog
Please note that the posts on The Blogs are contributed by third parties. The opinions, facts and any media content in them are presented solely by the authors, and neither The Times of Israel nor its partners assume any responsibility for them. Please contact us in case of abuse. In case of abuse,
Report this post. 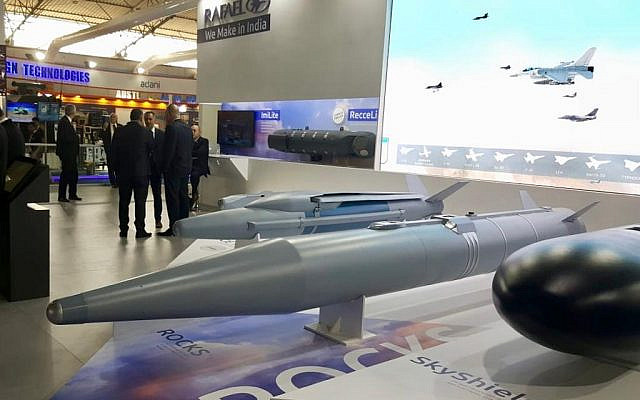 Israel-India defense ties have flourished since establishing formal diplomatic relations in 1992. In July 2017, Narendra Modi became the first-ever Indian Prime Minister to visit Israel, signaling a full normalization of the relationship. During Modi’s visit, the bilateral ties were upgraded to a strategic partnership. A core element of this relationship is robust defense cooperation.

There is an opportunity to take this bilateral cooperation forward and expand it to a trilateral one by shaping a start-up collaboration between India, Israel and the US. Such a potential collaboration can focus on emerging technologies like robotics, artificial intelligence (AI), and quantum computing. This collaboration will build on the national technological priorities of these three like-minded, tech-savvy democracies.

A shared threat perception of being surrounded by hostile neighbors has driven Israel-India proximity. Israel’s annual arms sales to India of an average $1 billion are the mainstay of this relationship. It has supplied India drones, radar systems, satellite imagery, hand-held thermal imagers and night vision devices, proving particularly valuable in counterterrorism operations.

Capitalizing on these bilateral synergies, the three countries can come together to advance their shared technological goals. The rapid development of emerging technologies is making a solo national effort to develop and adopt them inadequate. The tech lead of the US and its allies has diminished in the last few years as China and Russia have collaborated to attain a competitive advantage.

Israel and the US have already begun to collaborate on some emerging technologies. That collaboration has to expand to enlist India, the principal US partner in the Indo-Pacific. The financial logic of such partnership becomes even more apparent with the challenge of the COVID-19 pandemic, which has strained economies and resource mobilization and distracted many countries from their strategic goals. Such potential cooperation will enable cost-sharing for innovation, leading to optimal use of finite budgetary resources and achieving economies of scale.

The idea of trilateral cooperation is not unknown – but it is unfulfilled. In recent years, Indian American diaspora associations and Jewish American associations in the US have repeatedly raised the idea of a technology triangle between the three countries.  Similarly, in September 2020, Bonnie Glick, then Deputy Administrator of the United States Agency for International Development, revealed that the three countries had explored initial cooperation in 5G communication technology.

In some technologies like AI and quantum science, Israel and the US have already reached an advanced stage of research and cooperation, compared to India, which is in the early stages of research. But all of these technologies figure prominently in the three countries’ national technology priorities. Therefore, they will provide a good foundation for trilateral defense cooperation. It also promises to give a technological edge to their militaries, develop interoperability, and reinforce American and Israeli companies’ access to the Indian defense market.

To take forward the idea of a start-up corridor, the three countries can initiate discussions for a formal collaboration between India’s Defence Innovation Agency, Israel’s Directorate of Defense Research & Development and the US’s Defense Innovation Unit. They can then institute flagship technology R&D programs to develop use case scenarios. The three countries can create a seed fund to enable partnerships between the respective defense innovation ecosystems. Such a fund will offer initial funding to the start-ups’ ideas, even before reaching the technology demonstration stage. The seed fund may take the form of a multi-year commitment from the three countries.

Another way to forge collaboration between start-ups is to hold hackathons where teams representing the three countries will work on problem statements identified by their militaries. An additional layer will be an academic collaboration among the three countries’ premier tech institutions. Potential partners can be the Indian Institutes of Technology (India), Weizmann Institute of Science (Israel) and the Massachusetts Institute of Technology (United States).

Finally, India will host the G20 Summit in 2023. The G20 does not deal with defense cooperation issues, but it is the world’s most influential economic multilateral forum. More importantly, its members include 11 of the world’s top 20 arms exporters. The host country can invite non-G20 members through the regional consultation mechanism process. India can leverage this to make a symbolic gesture and invite Israel to attend the G20 Summit. With its unique experience in start-ups and innovation, Israel will fit the bill at the G20 meetings.

Technology has become the main driver of contemporary international relations, shaping emerging potential alliances. Keeping up with this broader trend, Israel, the US, and India can take the lead to A ‘Rocks’ air-to-surface ‘bunker buster’ missile displayed at the Aero India trade show in Bangalore, India, in February 2019. (Rafael Advanced Defense Systems).

About the Author
Sameer Patil is a Fellow at the International Security Studies Programme at Gateway House, a Mumbai-based foreign policy think tank. He has previously served in the Indian National Security Council Secretariat in the Prime Minister’s Office. All views expressed here are his own.
Related Topics
Related Posts
Comments
Advertisement