On Shavuot we recall the giving of the Torah.

Let’s look at the Torah from the perspective of current events in Israel.

Yes, it has not been an easy few weeks or year. We had the tragedy of Lag Omer, the uptick of violence and now full-scale terror and civil war between Jewish and Arab Neighbours.

We read in last week’s Parsha of Bechukotai that if we keep the commandments, we will have peace in the land and other blessings.

We know from Tanach, the greatest miracles and success happened when we are united.

As believing Jews, we have to ask what are these events coming to teach us?

Obviously, there is lack of Unity, not only in politics, but unconditional love between fellow Jews.

So, let’s try to put our differences aside, and work together for the common goodness of Israel and Mankind.

Baruch Hashem, we have a holy Torah – let us all learn together to discover and focus on what unites us, rather than on what divides us. When we will learn together b’ahavat Yisrael, with true love, the words of the Torah, all the words of the Torah will shine brilliantly into our hearts. Let’s start gain right now, b’simcha! Let’s start again this Shavuot.

We have another commandment in the Torah, to wipe out evil from the Land. Unfortunately, Joshua did not succeed, and we are paying this price of this until today.

We are facing an Evil force in the world, not only Hamas and Palestinians, but Jew Haters around the world distorting the facts, truths and moral equivalence.

So, now we have an opportunity to fulfill a Torah commandment to wipe out Evil.

We can do this physically and Baruch Hashem we have a strong army.

However, if we are unsure of rights to Jerusalem and Hebron and our historical homeland, then our enemies’ sense our weakness and launch these attacks.

So, what is needed? We all need to support Israel unequivocally, we need to strengthen our fellow Jews, we need to encourage Aliyah, and we all need to play our part in PR, support of Israel, setting out the facts and exposing the Lies. We all need be Like Ari Fund z’l

This week was also Hebron Day. It was the day when Hebron was recaptured in 1967. It took much sacrifice to establish our rights to Hebron and this struggle is still continuing.

One of my favorite photos is of Hebron in 1853. It was a small village, similar to Schechem and even Jerusalem. There were no Palestinians living in the Land. There were some Arab, Druze, Bedouin tribes. Where and from where did the influx of Arabs come from? This is subject to much dispute, but there are historical facts giving rise to Arabs coming from neighboring Countries looking for work and better economic conditions. And there were major population movements between 1948 to 1967 when Jordan occupied Israel. 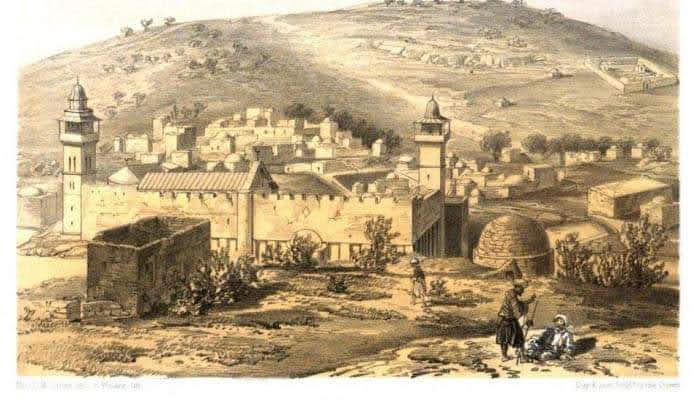 In fact, there is no place with documented proof in the history of the Jewish People as Hebron. From Abraham to King David till today.

And now let’s take a look at the Parsha Bamidbar,  we have the counting of tribes. For what purpose was the counting. To prepare for War.

We are in War. This War is not only about Land. Hamas have Gaza. It goes deeper than this. This is a Religious War. I encourage you to read Dr. Mordechai Kedar’s writings on this. See the end of this blog for one of his articles on this and look at his new website https://www.newsrael.com

I will further add that this War is between Good and Evil. It is a  War about civilization and what kind of world do we want.

Which side are you on?

What kind of world do you want for your children?

Time to stand up and eradicate Untruths and Evil from the world.

When burning synagogues and meetings – it’s a religious war.

When the sanctity of Torah books is desecrated – it’s a religious war.

When cars are burned only after a video that is of Jews – it’s a religious war.

When roads are blocked and hit only Jewish car passengers – it’s a religious war.

When the violence is accompanied by the calls ′′ In the spirit of blood, we will make you al Aqsa ′′ – it is a religious war.

When the struggle is described and labeled as a jihad – it’s a religious war.

When the fight is against a Jewish ′′ settlement ′′ in Israel, even inside the ′′ green line ′′ in Jaffa or Lod – it’s a religious war.

When the jihadists in Gaza, Jerusalem, Lod, Jaffa and Acre unite – it’s a religious war.

It’s a religious war when the violence is accompanied by shouting ′′ Khyber Khyber you Yehud, Jish Mohammed Nursing ′′ – ′′ Khyber, Khyber, oh Jews, Mahamad army will still return.” (Khyber was an oasis Next to Almadina where Jews sat, and Mahmad slaughtered the men and took the ladies).

But all kinds of people with us, whose lifestyle and thinking are cut off from religion, try to convince us that the problem is territorial, national, economic, civil and / or legal, because they are unable to understand, interfere and admit the fact that the basis of our problem with our neighbors is the religion of Islam, which is on its mouth. A Jew has no right to a state in any territory because the Jew must live under the wings of Islam as ′′ Ahl Dima “, ′′ Protectors “, in a state of ′′ poor ′′ – poor women, with limited rights only. According to Islam, Judaism (like all other religions) is ′′ Dean Battal ′′ – ′′ Religion of Aries ′′ – while only Islam is ′′ law “, ′′ true religion “, and therefore there is no justification for the establishment of a Jewish state and its existence. According to the Islamic attitude, the Jews are not a nation but communities belonging to all the nations of the world, so there is no Jewish nation entitled to its own country. According to Islam, Palestine in every territory is an Islamic territory that there is no way to remove it from the Islamic rule and therefore the Israel state, as a Jewish and democratic state, has no right to exist even if it was in the area of a square inch on the beach of Tel Aviv.

The religious war against Israel led by Haj Amin Alhosaini, and following the Muslim Brothers Movement, in its Palestinian branch Hamas, and its Israeli branch, the Islamic Movement. All these factions get their inspiration from religion, not from something else.