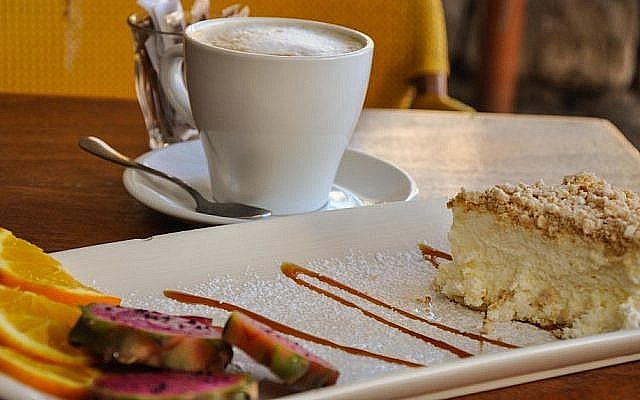 Cheesecake sweetens the Shavuot holiday and is great for entertaining or just for having around the house. (Michal Shmulovich/Times of Israel)

It was my first time visiting Cambridge, Massachusetts, home to the prestigious Harvard University. It was during a winter afternoon, which meant the sun set early. I decided to pray the afternoon prayer in the Harvard Hillel, the center of Jewish life on campus. Arriving a few minutes early, I walked into the Hillel library and was amazed by what I saw; young women and men were sitting and studying Torah with devotion and focus. While carrying the heavy academic burden of a full-time Harvard curriculum, these students were sitting and devoting their time to learning that will not show up in any of their transcripts, nor will they be getting any extra credit for. I was astonished when I suddenly realized what they were doing explained one of the most mysterious aspects of the Shavuot holiday.

The Talmud (Pesachim 68: ), discussing the laws of Yom Tov, shares a now-famous debate:

“Rabbi Eliezer says: A person has nothing but to choose on a Festival; he either eats and drinks or sits and learns the entire day, but there is no specific mitzvah to eat on the Festival. Rabbi Yehoshua, on the other hand, says: Divide the day, half of it for eating and drinking and half of it for the study hall, for he holds that eating and drinking are obligatory on the Festival.”

The Talmud goes on to make a statement that perplexes many:

“Rabbi Elazar said: All agree with regard to Atzeret, the holiday of Shavuot, that we require that it be also “for you,” meaning that it is a mitzva to eat, drink, and rejoice on that day. What is the reason? It is the day on which the Torah was given”.

Even Rabbi Eliezer, who says there is no obligation to eat and drink on Yom Tov, believes that on Shavuot, there is an absolute obligation to eat and drink on the holiday of Shavuot. Why? Because it is the day on which we had received the Torah. What is the connection between receiving the Torah and making sure that we enjoy the holiday of Shavuot.

In his commentary (ibid), Rashi explains that eating and drinking on Shavuot expresses our acceptance and joy in having received the Torah. By eating, drinking, and taking pleasure in the day of Shavuot, we show it is not a holiday we are celebrating because we have to, but because we are happy to have received the Torah. Had we just fasted and prayed on Shavuot, it would appear as if we accept the Torah as a burden and something we feel forced to accept. The joy, pleasure, and physical engagement states our love and affection for the day.

Rabbi David Levanon, head of the rabbinic court of Ashkelon, Israel, explains this Gemara based on a different story shared in the Talmud. The Talmud (Shabbat 88b) says that when Moses ascended to the heavens to receive the Torah, the angels saw him and were bewildered. “What is a human being doing among us?!” they asked. When God told them Moses was there to receive the Torah, the angels strongly objected. “Your most treasured treasure You have always cherished will be giving to human beings made of flesh and blood?!” the angels proclaimed.

Making the case for giving the Torah to humans of flesh and blood, Moses went on to ask the angles, what aspects of the Torah applied to angles. With no work, creativity, eating, or drinking, most of the Torah’s commandments cannot apply to them. The Torah was given to regulate and uplift human life on earth. This explains why it is that of all holidays, Shavuot is one on which eating and drinking are mandatory.

Shavuot and receiving of the Torah challenge us to live up to the uniqueness of the Torah; on the one hand, we must commit ourselves to a deeply spiritual and lofty spiritual calling; on the other hand, that calling is right here on earth—with all that it entails. Like the students, I saw in Harvard University exhibiting a deep commitment to Torah study, even while steeped in their academic and worldly responsibilities.

Unlike any other religion in the world, the Torah is filled with meticulous details of how and wherein the physical world is to be observed. The Torah is a manual mode for the world that we live in, one that is intended to guide us through the details of day-to-day life in this world. On the holiday of Shavuot, we celebrate exactly that. Making sure we take pleasure and joy in the festivities of this world while celebrating our commitment to the Torah captures the essence of Shavuot and what this holiday is all about. Chag Same’ach!

About the Author
The writer is a rabbi, writer, teacher, and blogger (www.rabbipoupko.com). He is the president of EITAN-The American Israeli Jewish Network and lives with his wife in New York City.
Related Topics
Related Posts
Comments
Advertisement