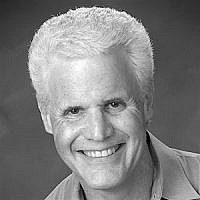 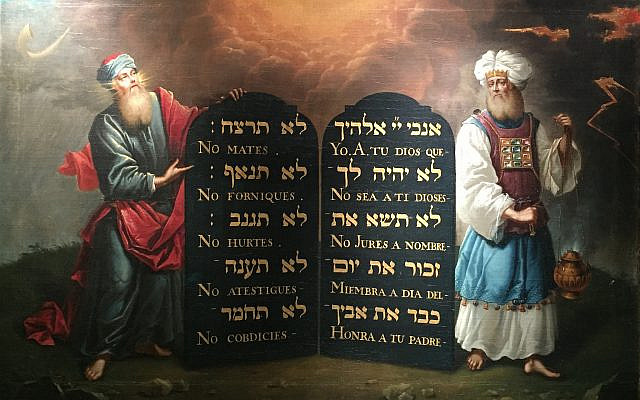 Moses and Aaron with the Ten Commandments, by Aron de Chaves/z, in Amsterdam, painted from 1674-1675. (Wikimedia Commons)

As I write this, the seven-week long “freedom season” that began with Passover will be concluding with the observance of Shavuot. Shavuot is the climax to this seven-week period because it commemorates G-d’s revealing His mandate to the Jewish people to be “a kingdom of priests and a holy people,” and the means to follow that mandate (observing the commandments). The Jewish people were freed from Egyptian slavery by G-d so that they would be free to serve Him.

But there are several teachings from our sages that seem to indicate a certain discomfort with the notion that what was revealed at Sinai was supposed to be for the Jewish people exclusively. They teach that before the Torah was offered to the Jews, G-d “shopped” it to other nations, each of which declined to accept it for their own specific reasons. They explain that G-d revealed His will on a mountain in the desert and not in the specific territory promised to the Jewish people, to emphasize that just as the desert is ownerless, so the Torah is “ownerless” — it is not the pre-determined, sole possession of any person or any nation. Rather, whoever wishes to connect with its teachings is free to do so.

Moreover, the sages teach that when G-d spoke at Sinai, the Divine Voice was heard in 70 languages, so that the rest of the nations of the world could hear, understand, and have access to what was revealed. In this vein, Rabbi Tanhuma taught that when heathens heard G-d’s voice, those who would not accept it died. Commentators explain that his comment should not be taken literally, but instead understood as a way of saying that when pagans began to accept Israel’s G-d as the ultimate Moral Arbiter (“ethical monotheism”), it marked the death of pagan civilization (cf. Midrash Shemot Rabbah 5:9, Soncino, 87).

Rabbi Tanhuma’s comment came to mind last week in the wake of the horrific tragedy in Uvalde when someone posted the following on social media:

I don’t remember a single school shooting when I was a kid. What I do remember is our teacher having us begin the day reciting the Pledge of Allegiance, reading from the Bible and praying. We also had the Ten Commandments on the wall.

Maybe getting rid of those things wasn’t such a good idea after all.

It brought back the memory of Mrs. Pickett’s second-grade class: daily recitation of the Pledge of Allegiance, the 23rd Psalm and the Ten Commandments prominently posted on one of her bulletin boards.

In recent times, there has been a good deal of effort to rid American public schools and American public life of saying prayers, of displaying the Ten Commandments, and of reciting the Pledge of Allegiance. Those who support these efforts believe that they threaten the rights of those who are not religious or particularly patriotic. Indeed, they may have a sound, constitutionally legal argument.

But their removal has had clear consequences to our social order, and those consequences have been negative: more violence (and not just with guns!), breakdown of the family, more tolerance of corruption, and less respect for law and order. Our Sages believed that without all humans — not just the Jews — eventually accepting the moral authority of Israel’s G-d (the only Deity that demanded moral behavior from human beings), the world could and would ultimately return to the moral chaos of Noah’s time, when there were no laws and rules, and everyone literally did what was right in his/her own eyes.

Curiously, Jews in the US often have been at the forefront of these efforts to remove public prayer and virtually any expression of ethical monotheism from the public arena. It is curious because Shavuot itself commemorates the moment in history when we Jews were assigned to be the agents of bringing ethical monotheism into the world. Whenever we recite the Aleynu prayer, we praise G-d for giving us this assignment, but also pray that eventually all humanity will accept those tenets for which we are supposed to be the “walking commercials.”

Yes, we often hear that people do not need G-d to be good, and it is true that a person can be a good person without G-d, and many are. But they don’t have to be! Moreover, the “good” to which such people subscribe is often merely the echo of what was said at Sinai. The message resonates with them, yet they reject the Messenger. They believe that “thou shalt not murder,” “thou shalt not steal,” etc. are a priori wrong. But without an ultimate Moral Arbiter, why are these not just personal opinions, and not bedrock moral teachings incumbent all humans? What will happen when the Messenger is no longer heeded and the echo fades?

In the wake of Uvalde and the other countless acts of random violence and cruelty that we continue to experience in this country, the Sinai experience beckons us Jews to rededicate ourselves to be G-d’s “deputy Messengers.” Rather than work to remove from the public sphere the Voice that spoke at Sinai and reverberated throughout the world, we Jews are called, along with other G-d-fearing people, to amplify it and make it reverberate again however and whenever we can. If we do not, the world will ultimately become deaf. And… if we truly are called to be “a light to the nations,” then our failure will mean the world is also sinking into moral darkness.

At the end of the day, G-d says to us: “You are my witnesses…I’m depending on you.” As always.

It’s time for the chosen ones to choose.