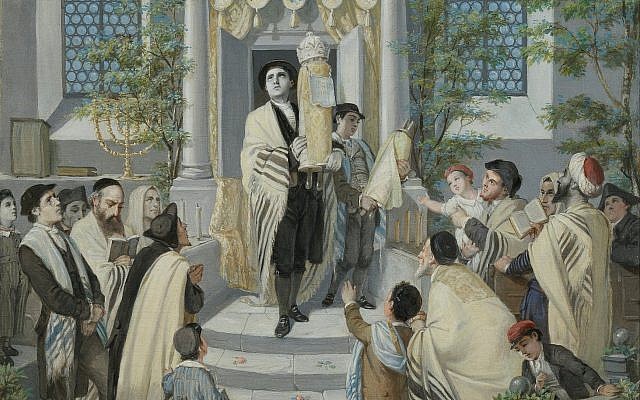 Shavuot (a.k.a. the Feast of Weeks, or “Pentecost”) is the only Jewish holiday with no fixed day on the calendar—it is always the fiftieth day from the beginning of the counting of the Omer (which itself starts on the second day of Passover). What is so special about the number 50, and what is its connection to Shavuot?

On Shavuot, it is customary to read the Book of Ruth (Megilat Rut). The story begins with Lot and his daughters running away from Sodom and hiding in a mountain cave. Seeing the destruction of Sodom, the daughters of Lot suspected that God, in his fury, destroyed the whole of humanity, and they were the only people left on Earth. Wishing to ensure the continuation of the human race, the daughters conspired to have relations with their father and conceive from him. To this end, they got their father inebriated and laid with him while he was oblivious to what was going on. Lot was drunk and sound asleep, unaware of the act.

And they made their father drink wine that night. And the first-born went in, and lay with her father; and he knew not when she lay down, nor when she arose. Genesis 19:33

And they made their father drink wine that night also. And the younger arose, and lay with him; and he knew not when she lay down, nor when she arose. Genesis 19:35

When the older daughter conceived and gave birth to a son, she called him Moav (literally “from father”). As Lot was oblivious to this incestuous union, his consciousness was at its lowest level.

The soul of Lot was reincarnated into Judah, a son of Jacob. Judah also had improper intimate relations with his own daughter-in-law, Tamar, whom he mistook for a harlot. Seeing that the youngest son of Judah grew up but was not given to her in a levirate marriage, Tamar dressed up as a harlot to lure in unsuspecting Judah.

And he turned unto her by the way, and said: “Come, I pray thee, let me come in unto thee”; for he knew not that she was his daughter-in-law. Genesis 38:16

Although Judah was aware of the act, he was unaware of with whom he was intimate. This is symbolic of the next level of consciousness—awake but unaware.

The story ends with the righteous Ruth, a Moabite princess, a descendant of Moab (Moav) and Lot, who ultimately marries Boaz and gives birth to Perez, beginning the Jewish royal dynasty of David. In this instance, however, Boaz was fully aware. Unlike Judah, Boaz realized the pure intentions of Ruth and praised her for choosing him—an old man—over younger men. Moreover, he delayed being intimate with Ruth until after he performed the ceremony of the levirate marriage. His awareness of the pure intentions of Ruth, and his awareness of what the Torah required of him allowed Boaz to consummate the marriage in purity and sanctity.

So Boaz took Ruth, and she became his wife; and he went in unto her, and the Lord gave her conception, and she bore a son. Ruth 4:13

Their union produced the grandfather of King David.

In all three episodes, women orchestrated a relationship that was either improper or, at least, had an appearance of impropriety, while the men involved were blissfully unaware, or aware but clueless of what was going on. Only at the end, when Boaz marries Ruth, is he both awake and aware of the relationship.

These three episodes are connected, in that they represent the first stages of the unfolding of the Davidic royal dynasty ultimately leading to the Mashiach (Messiah). The three episodes also symbolize the stages of maturation of consciousness from being asleep and unaware to being awake and unaware to finally being awake and aware. It is this third level of consciousness that one must reach in order to receive the Torah.

Perhaps, we can draw a parallel between these three levels of consciousness and the three ordinary states of matter—solid, liquid, and gas. For example, water turns into solid ice at temperatures below zero degrees Celsius. In this frozen state, water molecules have low energy and barely move. Above zero but below 100 degrees Celsius, water is liquid. The energy of the water molecules is increased, with molecules moving around briskly. Although water molecules are no longer confined to the crystalline structure of ice, they are still connected in long polymer-like chains. So, at these temperatures, water molecules acquire more degrees of freedom, but are not completely free. Above 100 degrees Celsius, water molecules move so fast that they break free of the chemical bonds that hold them together and evaporate—that is, they become vapor (gas). At such temperatures, water molecules are completely free and unconfined by any structure—crystalline grid or polymer-like chains. In this analogy, molecules’ motion is parallel to the levels of consciousness, whereas the degrees of freedom are parallel to the awareness.

Let us summarize this parallel in the following chart:

We might even liken the speed of the water molecules in this example to the “speed” (or, more precisely, frequency) of the brainwaves that signify one’s level of consciousness. Indeed, the brainwaves that manifest a person’s level of consciousness are slowest during deep sleep, which is characterized by the delta rhythms of 4 Hz and below. The state of wakefulness is characterized by the beta rhythm of 12 Hz and above. And heightened awareness and focus correspond to the gamma rhythm of 50 Hz.

To return to our examples from the Bible, the progression of consciousness and awareness in the three biblical stories is as follows: we start with Lot who was neither conscious nor aware; we then progress to Judah, who was conscious but unaware of the identity of the woman he mistook for a harlot; and finally, we meet Boaz who was both conscious and fully aware of the identity of Ruth (as the widow of his relative), her pure intentions (to enter into levirate marriage, as required the Torah law), and his own obligations under the Torah law, as being obligated to redeem his relative’s land and marry his widow in the levirate marriage ceremony.

We read the Book of Ruth on  Shavuot not only because Ruth was a grandmother of King David whose yortzait (anniversary of passing) is on Shavuot, but also because we want to tap into this highest level of consciousness symbolized by the relationship between Ruth and Boaz to open our minds to receiving the Torah.

Now we can understand why the Shavuot always falls on the fiftieth day. The number 50 represents the highest level of wisdom, Nun Shaarei Binah, 50 gates of wisdom. The fiftieth gate is unachievable; only Moses merited reaching this highest level. Through our own efforts, we can reach at most 49 levels (which is what we are meant to do during the 49 days of the counting of the Omer—Sefirat HaOmer), but the ability to reach the fiftieth level can only be granted by G-d as a gift.

May G‑d open our minds and expand our conscience so that we can merit receive the Torah on Shavuot b’simchah (with Joy) ub’pnimiut (and internalize it)!