My father, of blessed memory, was born in the same era Ruth Bader Ginsburg was. They both went to high school in the same swath of southern Brooklyn. They were both the children of immigrants from Russia and eastern Europe who toiled in small businesses and factories.

They were part of a special American generation of striving Jews who were able to pursue educational opportunities in ways their parents could never dream of. They were influenced by radical ideas and had a hunger for social justice, but they were never really radical. Their hunger for change was tempered by a kind of practicality passed onto them by their parents, and a desire for political stability and democratic order that was perhaps influenced deeply by the knowledge in their bones that their families had escaped from places where the rejection of democratic order and values had had violent and unimaginably deadly consequences. 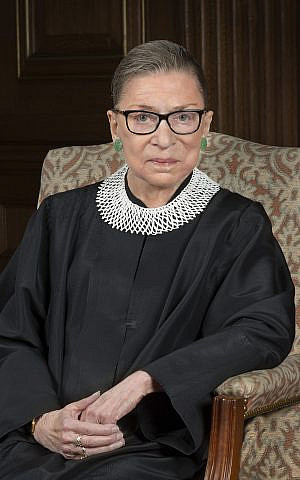 I was stunned to hear one person who actually knew her — Emily Bazelon — saying that Ginsburg made a mistake in staying on the court and not stepping down so Obama could name a replacement. It made me so sad to hear somebody say that.

It’s not that I don’t understand the sentiment. I, too, desperately wish things had turned out differently, and am afraid of what it means for America if Donald Trump, as seems likely, is able to name the next US Supreme Court Justice.

But think of what RBG came to mean to so many people, especially young women, in these Donald Trump years, think of how much of an inspiration she was. And we don’t know how much she was able to influence what went on behind closed doors in the Supreme Court chambers these last years, how much, perhaps, she was able to influence Chief Justice John Roberts. Her voice — and the example of her courage and of what Bazelon calls her “indomitable spirit” — may have played a role in influencing Roberts to make decisions on things like Obamacare that stunned his conservative friends.

I’m so sorry to see her gone. I grieve for her, for her family. And the nation.