A drawing from one of the children at the Woman to Woman battered women’s shelter in Jerusalem, as a response to the Covid 19 crisis. The children’s center there offers a therapeutic and educational framework for the children who are residing at the shelter with their mothers. Spring, 2020. (Courtesy of Woman to Woman).

We are really in the midst of two pandemics. One of them we know all too well. The other is also ongoing and for many, is just as dangerous. Just like the coronavirus, the virus of violence against women continues to spread easily, and flourishes in enclosed spaces. So much about its extent is still not known. Yet all of us have seen the warnings of a new outbreak, with the number of calls to hotlines skyrocketing during the lockdown over the past few months, both here and abroad.

And each time there is another glaring headline about another murder, we see that we can be shocked all over again ‘Why does this keep happening?’, we may ask out loud. It is impossible to fathom how it can be. More quietly, we may also wonder – ‘why didn’t she just leave?’ But then, afraid that it may sound faintly accusatory, we keep this one to ourselves. 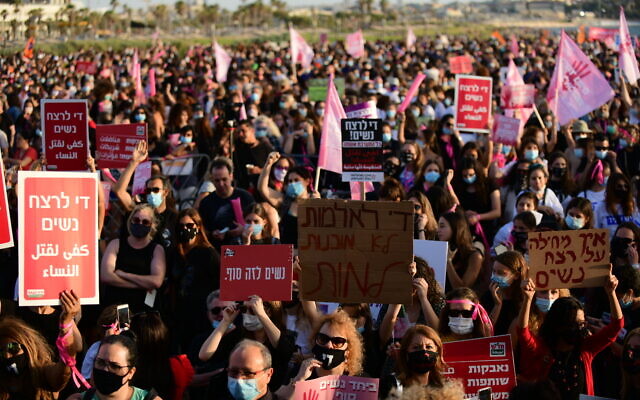 Thousands of people gathered at a rally in Tel Aviv on June 1, 2020, calling for government action to end violence against women. The protest started off by reading the names of eleven women who were killed since the start of the year. (Credit: Tomer Neuberg/Flash90).

Just this week we saw thousands of people pour into the center of Tel Aviv to protest government inaction. You see, many organizations already have answers to how we can protect women from violence. They know how to respond to the questions raised after each news story. An entire network has been employed in recent decades to show us what works- hotlines, rape crisis centers, battered women shelters, counseling, trainings for the members of the courts and the police system (yes, too many of the murder victims first turned to the police for help).

But it is as if these vital efforts have been battery charged by the power of dedication alone- with a bit of exasperation mixed in. Minimal budgets are the norm, with legions of volunteers and activists supporting the professional work.

Each time we see the pattern– heartbreaking headlines appear, followed by public outrage and a cascade of promises. But then…budgets stay frozen. Public interest fizzles. We all move on to another crisis until the next harrowing tale consumes the front page. 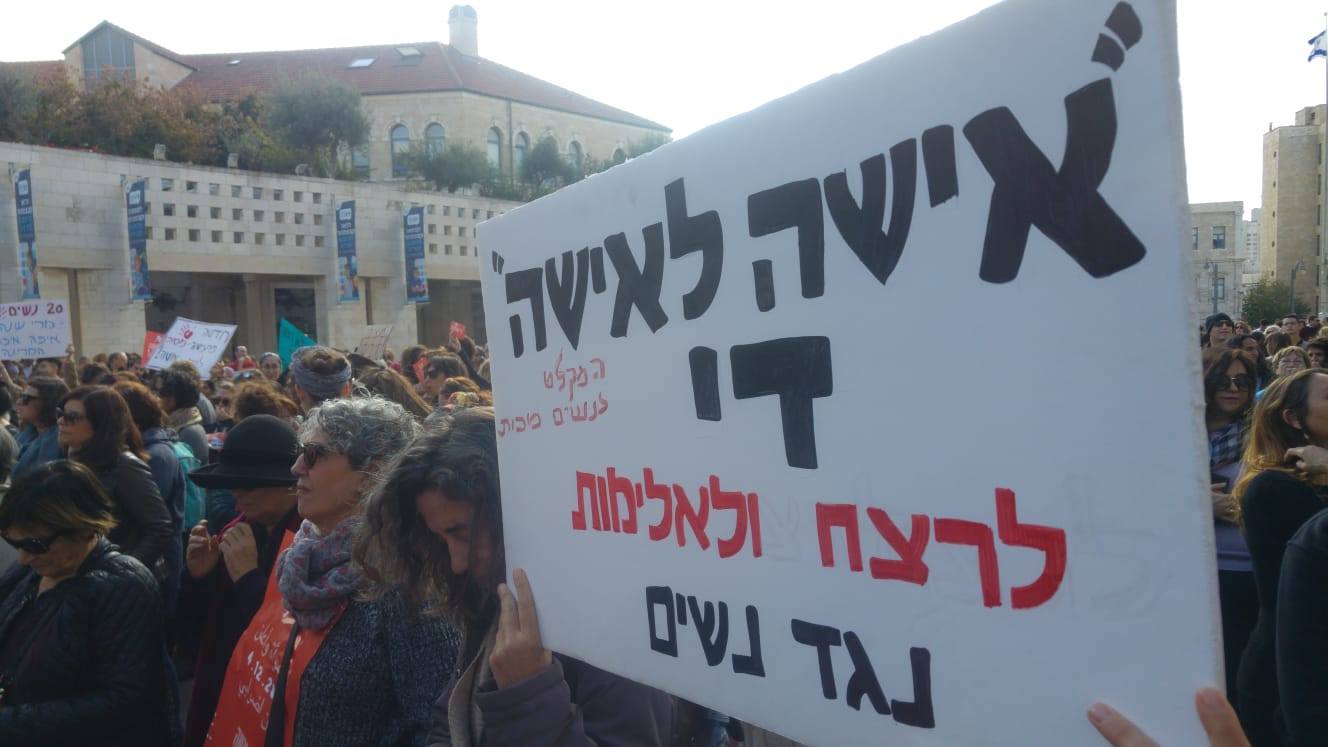 Staff and volunteers of Woman to Woman, including long time volunteer Drora Shek Uda, protesting on December 4th, 2018. The protests and national strike had been preceded by a controversial visit of the prime minister to the Jerusalem Shelter where the government inaction on the topic garnered public attention. (Courtesy of Woman to Woman)

So the protest, the advocacy, the noise we can make – all of it needs to continue. The volume needs to be turned way up.

Entrance to the Jerusalem shelter. Every effort is to make the shelter a welcoming space, as part of efforts to create a healing environment for families who arrive and stay for extended periods of time. Fall, 2016 (Credit: Rivka Hillel Lavian).

And while the public protest must be loud, purposely quiet, purposely discreet, are the battered women’s shelters.

They are hidden from view, always anonymous to an onlooker from the street. Their non-descript presence, a protection to those inside, in no way diminishes the outsized role that they play in keeping women and their children safe. The shelters -fifteen around the country including two for Arabic speakers and two for Ultra-Orthodox women– are a last resort when a woman is left with no choice but to flee her home. 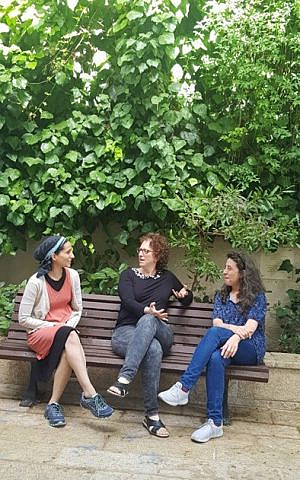 Naomi Schneiderman, the Executive Director of Woman to Woman, sitting in the middle, with social workers Kinga Bikel on the left, Leah Sadras, at right, by the shelter. Spring, 2020 (Courtesy of Woman to Woman).

One of the experts who has helped me over the years to make sense of how these centers can extricate women from a cycle of violence is Naomi Schneiderman, the Executive Director of Woman to Woman which runs a battered women’s shelter in Jerusalem. What I can promise is that you will not leave a conversation with her unaltered. Naomi can tell you -in case you haven’t been convinced over the years- domestic violence is everywhere, in every community. It is as if it’s in the air, the drinking water. For years she has been seeing its daily cost, which we know has only gotten worse with the lockdown as many homes have become pressure-cookers.

Battered women’s shelters are physical havens. They give immediate protection that take women, often with children, out of danger. Walking through the shelter in Jerusalem with Naomi feels more like visiting someone’s home, with warmth and hugs doled out together with the stuffed animals and daily meals. 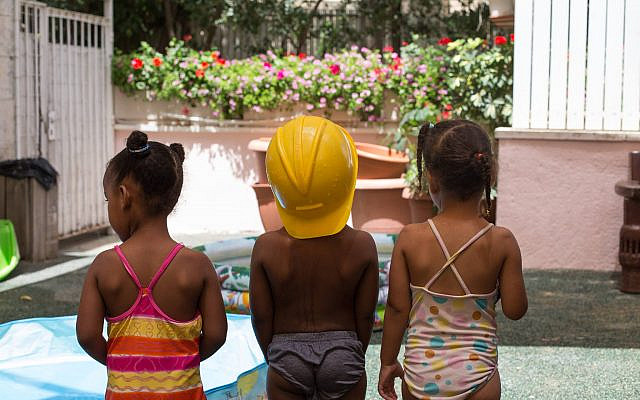 Children at the shelter playing outside. With children from all backgrounds, you are just as likely to hear them speaking in Hebrew, Arabic, Amharic, Russian or Tigrinya. Fall, 2016 (Credit: Anat Dycian).

But it is just the start of what they do. The untangling of the abusive relationship takes time. By the time the blows and bruises start to come, it is likely that a woman has already suffered a much longer time from being controlled, demeaned, and isolated from family and friends- all the while being convinced by her partner that this is what love looks like. 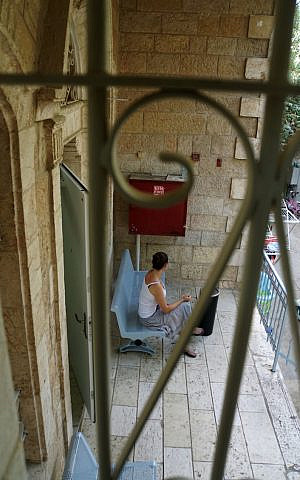 A woman at the shelter in Jerusalem. Referrals are provided in cooperation with the social welfare system, and occasionally though the police. Fall, 2016 (Credit: Annat Gal).

Sound foreign? Or seem unlikely? You know, women can get used to a lot. We are well-accustomed to shoving and cramming ourselves to fit into pre-determined spaces. We are raised to be agreeable, to be caregivers and nurturers to our family. We are conditioned to smile and accept mostly anything, and in too many cases even bodily harm. And we can feel trapped financially, concerned for our children’s wellbeing, pressured by our community to ‘keep the peace’. And on and on. That is why the work of a battered women’s shelter starts with providing a safe space, but is so much more.

At Woman to Woman and other shelters, the emergency that brought the women to their doorstep is just the trigger to begin a much longer conversation that takes many months, often longer. Naomi can outline the complex issues around the critical importance of financial support , the possibilities of longer term housing options, as well as the need for legal counsel – especially if the religious courts, which tend to be stacked against their interests, are involved.

And she can also explain about the many other conversations that take place with residents – conversations about what a woman wants to settle for in life, what she thinks she deserves, what is forgivable and what is not. Israela Hirschberg, founding director of the Woman to Woman’s Halfway Housing program, accepting the Knesset Speaker’s Quality of Life Prize. Due to this innovative program, Woman to Woman was awarded the prize for its contribution to society and the community in combating domestic violence. Winter, 2009 (Courtesy of Woman to Woman)

You will just want to make sure not to take up too much of Naomi’s time. She has about one of the longest ‘to do’ lists I know. Aside from the day-to-day challenges of managing the shelter, lately Naomi has been busy ensuring everyone’s safety amidst the threat of coronavirus, putting out emergencies as needed, raising funds, all while delicately balancing a working relationship with a government that needs constant reminders of the extent of services offered by the shelters. The shelter itself may be tucked away, but that should not belie the prominent public role its founders, staff and supporters have had over the years in advocating tirelessly for solutions to domestic violence.

And for the rest of us? Well, we can keep doing our homework about this, becoming advocates. We want to make sure that when the questions come up – ‘how can this happen?’, ‘why doesn’t she leave?’ or ‘where can she turn?’ we have our answers ready. 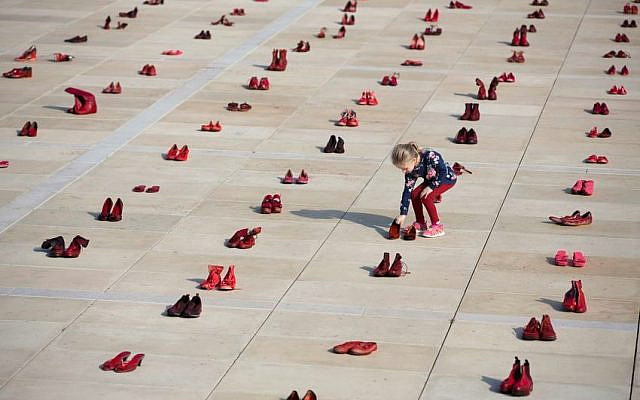 A display of hundreds of red shoes at the Habima Square in Tel Aviv, as part of the protest against violence toward women on Dec. 4, 2018. Together with protests around the country, there was a national strike of over 300 institutions, municipalities, schools, and groups. (Credit: AP Photo/Oded Balilty)

We can keep championing everyone who makes a difference –the activists on the street, the volunteers on the hotlines, the network of supporters, and of course, the NGO directors and staff like my friend Naomi who provide shelter around the clock. All of them want to make sure that we don’t close our eyes to this hidden pandemic, and that we certainly don’t close our mouths either- that we raise our voices and shout out loud, remembering always the threat of what can happen behind closed doors.