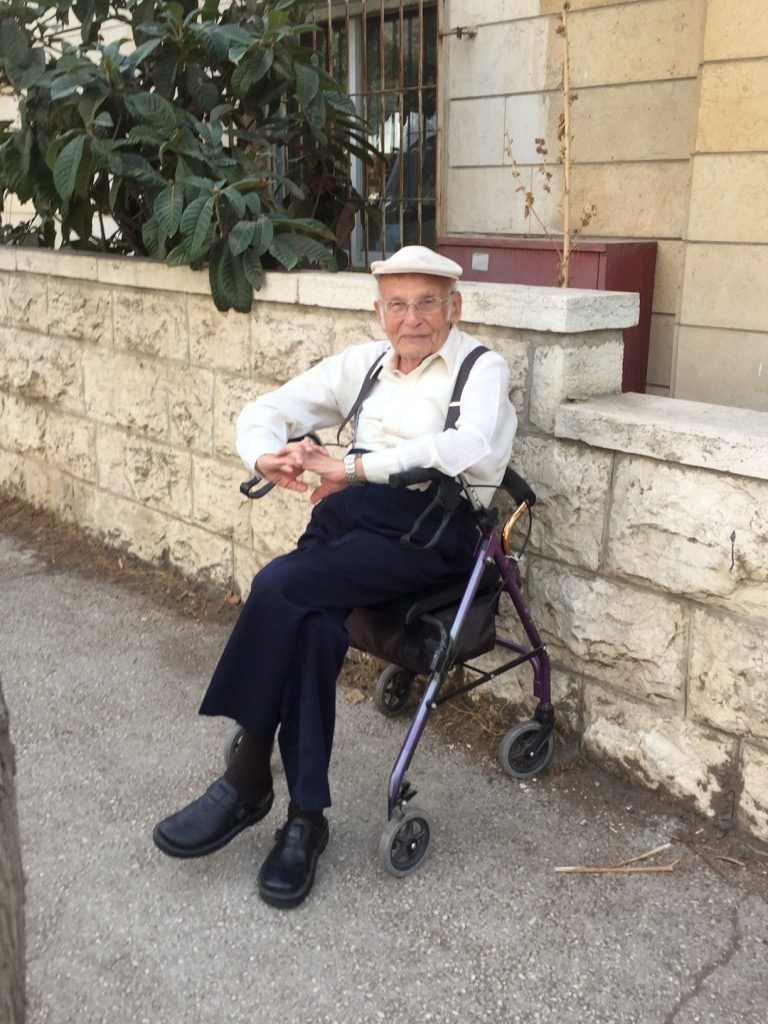 Enjoying the sun outside his apartment in 2015

The last day of Pesach 2018, I left the synagogue during the Yizkor memorial prayer in keeping with the custom (minhag) of not being present during your parents’ lifetime. That Thursday, I was attending the funeral of my father, Rabbi Arnold Heisler, at the Eretz HaChaim cemetery in Beit Shemesh, Israel.

Because my father was in generally good health, despite being 97, we had continued our lives as if this situation could, and would, last forever.  However, none of us can make that bargain and when we learned that he was suddenly ill, we had to decide when to fly to Israel. It was my hope that I could hold his hand one more time but that was not to be, and he died peacefully in his sleep before we could arrive.

After the burial, the next decision was where should I sit shiva. With people living scattered throughout the country and even the world, the mourners (aveilim) frequently live far apart. However, it was abundantly clear to me, that the proper place for me was with my mother and sisters at the home that my parents had lived in together, although I have lived for many years in New York.

Much of our extended family lives in Israel and during condolence calls, I was able to spend a few minutes with cousins’ children who I have not known as adults. High school classmates who have made aliyah over the years visited. And Riverdalians still in Israel, having come for Pesach, visited as well and so I still had the flavor of home.

Everyone who has sat shiva has a different experience as each visitor come with his or her own stories to tell. My father touched many lives in the United States over his years in the rabbinate. Later, when my parents made aliyah, they turned volunteerism into a full-time profession although my father’s advanced age gradually forced him to cut back. My father’s great gift was his warmth and empathy and that trait came up repeatedly during the shiva; his smile of greeting and his genuine pleasure in being involved with other people were continually invoked.

The classic Ashkenazi parting ritual formula of condolence is “HaMakom Yenakhem Eschem Betoch Sh’ar Avelei Tzion V’Yerushalaym (May G-d comfort you among the mourners of Zion and Jerusalem).” I believe its intent is to subsume our personal sorrows within the larger context of ourselves as members of the wider Jewish community. It is, therefore, fitting that we concluded shiva on Yom HaZikaron (Memorial Day), marked both evening and morning with two minutes of silence throughout the country, honoring those fallen in all the wars forced upon Israel.

Symbolically, Yom Ha Zikaron is followed the next day by Yom HaAtzmaut (Independence Day). This was also fitting in the context of our shiva, as my parents were able to fulfill their final dream of making aliyah and contributing there to the best of their abilities.

The timing of my father’s death truly added symbolic depth to our personal sorrow.

About the Author
Sura Jeselsohn has a background in science and is an avid gardener and quilter. Her weekly column, Green Scene, is published in the Riverdale Press. She has published a book, "A Habit of Seeing: Journeys in Natural Science" , available in paperback and Kindle at Amazon.com.
Related Topics
Related Posts
Comments