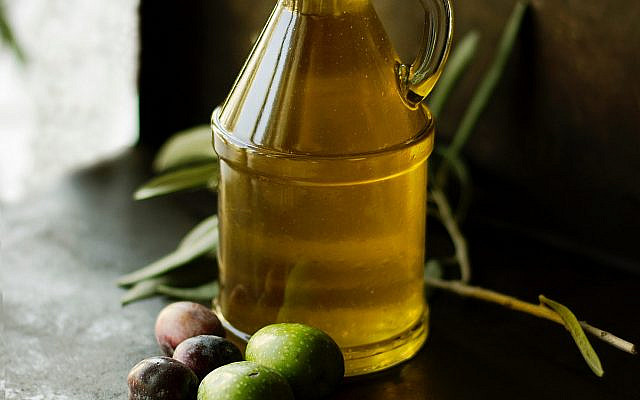 The Torah informs us that God created the world in six days and ceased working on the seventh, the Sabbath. The number six represents the natural world that was created in six days (time) with its six spatial directions (east-west, north-south, up-down). The number seven represents God’s immanence, the hidden presence of the Divine at the heart and core of this world.

The following number, eight, represents God’s transcendence above and beyond this world. Hanukkah happened from the level of eight, which is beyond natural law.

In Hebrew, the word shmonah (“eight”) has the same letters as hashemen (“the oil”) and Neshama (“soul”). The number eight is also associated with the revelation of Moshiach, the Messiah. This is reflected in the Talmud, which states, “The harp of the era of Mashiach will be of eight strands.”

And it is all related: oil, Moshiach, the eight days of lighting on Hanukkah, and soul.

All kings from the Davidic lineage were anointed in the manner appropriate for the ultimate king and redeemer of the world, who we call Moshiach, which means “the anointed one.”

Oil and the Messiah-Moshiach have a significant connection.

Oil represents wisdom. Tekoa, a city south of Bethlehem, was renowned for its olive oil. The Talmud says that because the residents of Tekoa “were regulars with olive oil, wisdom was found in them.”

The study of God’s wisdom — our oil, the Torah — affects change in people. One of the characteristics of oil is that wherever it is placed, it will saturate.

This wisdom is imbued with an element that surpasses the mind and can eventually affect this change in those who study it. This recognition that the Torah is the wisdom of God, who allowed Himself to be understood only in limited measure, creates an extraordinary approach to its study, one of reverence, holiness, and purity.

The Greeks viewed the study of the Bible no different than any other philosophy and therefore saw nothing wrong in using impure oil for the light of the Menorah.

The Greeks had their own wisdom. It was God’s wisdom they were out to eradicate. The Bible, which is God’s wisdom, prohibits impure oil. The Greeks argued that purity is beyond logic and cannot be rationally grasped. Therefore, the Greeks did not pillage the oil from the Temple in Jerusalem — they merely made it impure.

The prophet says that when the Messiah comes, “the world will be filled with the knowledge of God as the waters fill the oceans.” Then, the light of unambiguous wisdom will shine most brightly. “The stones will shout from the walls,” all that they saw and heard throughout the ages. The times of Moshiach are associated with the best times for the Universe because truth and clarity will reign; no more darkness, no more falsehood, and no more confusion.

Moshiach is acclaimed as the anointed with oil. This special human being from the Davidic dynasty will usher in a grand era of the highest wisdom and light.

Lighting the Hanukkah menorah (hashemen) all eight nights, especially the 8th night of Hanukkah (shmona) connects us with the deepest levels of our soul (neshama) and the light within. This level of soul is the shine of Moshiach in each of us. This adds more light to the world and brings us closer to this beautiful and ultimate era for the entire Universe.