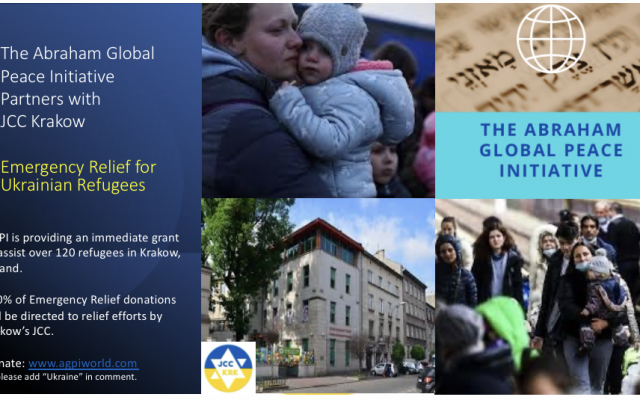 Leora Shemesh and Justin Linden: “We cannot ignore the significance of Krakow, Poland, and why this location especially matters to us. Situated just a few miles from the infamous Auschwitz death camp and given the horrific history of the Jewish community in Krakow, its incumbent on all of us to help the refugees".

Shabbat Shalom and welcome to the latest edition of TheFridayReport. It’s been another tumultuous week in Jewish affairs and global human rights. Most of us find it hard to believe the unfolding terror in Ukraine. Cities destroyed. Millions of people forced to leave their homes. Refugees fleeing the carnage with just the clothes on their back.

The shocking images playing out in real time are bringing back horrific memories for many Holocaust survivors. In one of my many conversations this week with Holocaust survivors and refugees of the Holocaust, Judy Wilson recalled her trauma as a child when she was forced to leave her home in Budapest and flee for her life, not knowing if she would survive or what her future might be. The images of fleeing Ukrainians are hitting home.

That’s why this week our organization took direct action. We partnered with our friends at the Krakow’s JCC who are aiding over 120 refugees with food, housing, medicine and clothing. In the words of AGPI’s Vice Presidents Leora Shemesh and Justin Linden: “We cannot ignore the significance of Krakow, Poland, and why this location especially matters to us. Situated just a few miles from the infamous Auschwitz death camp and given the horrific history of the Jewish community in Krakow, its incumbent on all of us to help the refugees.”

Russia’s assault on Ukraine is a war-crime that must be immediately addressed by the International Criminal Court. The attacks on civilians, hospitals, schools, cities is unconscionable. This week, as we launched our Power of One exhibit in a joint effort to promote human rights with the Royal Canadian Mounted Police, we spoke about Russia’s actions and the unfathomable human rights abuse now taking place.  Natan Sharansky’s assessment of President Putin’s motivations is correct: “He has said over many years that the biggest tragedy of the 20th century was the destruction of the Soviet Union. So his mission is to bring back that unique superpower.”

As Canadians, we stand united in our efforts to stop the carnage. In fact, Russia has created more international unity among human rights organizations, nations and corporations like McDonald’s, Starbucks, Visa, Amex and Mastercard (just to name a few) – that have all withdrawn operations from Russia. This morning, President Biden and European allies moved to further strip Russia of its trade status. Upon departing Europe, Canada’s Prime Minister Justin Trudeau also announced sanctions on “32 entities working in Russia’s defense sector” with ties to Canada.

We applauded Israel’s President, Isaac Herzog for taking the initiative of renewing peace with Turkey. This week, Herzog landed in Ankara for the first high-level state visit to the country in over a decade. Even while ‘giving peace a chance’ is always better than the alternative, to forge renewed diplomatic ties with Israel, Turkey must shed its support and affiliation with Hamas, a terrorist group.

At the same time, this week, AGPI applauded the US House of Representatives for approving $1 Billion to supplement Israel’s Iron Dome and $3.8 Billion for its national security. Maintaining a strong Israel leads to its peace and security. This is especially true now more than ever as reports indicate that the United States has acquiesced to most of the Iranian demands in Vienna. In fact, what we are seeing are headlines screaming at the US to stop this farce of a negotiation with the biggest sponsor of terror in the Middle East.

In the Washington Times, Clifford May correctly wonders, “Will the US capitulate at the negotiating table in Vienna to the Islamic Republic of Iran, a regime that funds and instructs Hezbollah, Hamas, Palestinian Islamic Jihad, and the Houthi movement in Yemen whose catchy slogan is “Allah is Greater, Death to America, Death to Israel, Curse on the Jews, Victory to Islam”? A bad deal with Iran – especially now – will be an existential threat to Israel and likely lead to an all-out war – not what the world needs right now.

What is clearly astounding is that even while the world is tearing itself apart and we are seeing carnage on Ukrainian streets, we continue to see antisemitism proliferate. This week, we extended a hand in support of the University of Toronto’s 300 Jewish faculty members who wrote an open letter to the Temerty Faculty of Medicine: The letter drew “attention to the falsehoods, twisted logic and antisemitic rhetoric that are contained in the letter sent by other Faculty members…in which they condemn Irwin Cotler’s presentation on ‘contemporary antisemitism’ that was held this past January 26th.”

Given the rampant antisemitism we are seeing in schools here at home and around the world, a precedent setting ruling by Ontario’s Human Rights Tribunal found that the Ottawa-Carlton District School Board allegedly breached Ontario’s human rights code following threats that were hateful and antisemitic. This ruling now puts school boards on notice as they are forced to address student victims of antisemitism, or risk breaching Ontario’s Human Rights codes.

In my presentation of the Menorah this week to RCMP Assistant Commissioner Jodie Boudreau, I spoke emphatically about its symbolism. Reflecting on the recent bombing near the Menorah at Babyn Yar. “As we light each candle, the world around us gets brighter. So too, all people of goodwill must stand together against evil.” We must have faith and stand together to protect our past and defend our future.