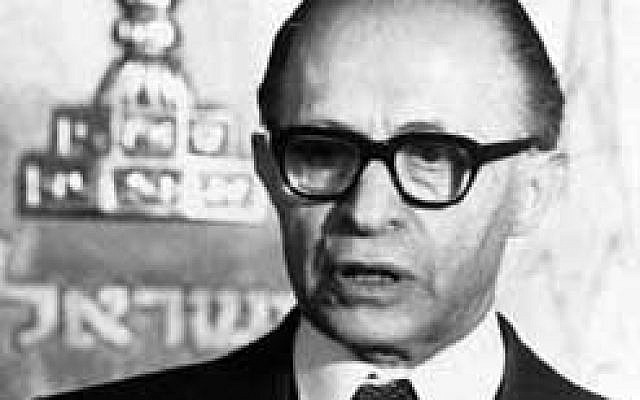 On June 22, 1982, Israeli Prime Minister Menachem Begin responded forcefully and passionately to a comment from then US Senator Joe Biden that tied expansion of Jewish towns in the West Bank to US foreign aid for Israel.

“Don’t threaten us with cutting off your aid. It will not work. I am not a Jew with trembling knees. I am a proud Jew with 3,700 years of civilized history. Nobody came to our aid when we were dying in the gas chambers and ovens. Nobody came to our aid when we were striving to create our country. We paid for it. We fought for it. We died for it. We will stand by our principles. We will defend them. And, when necessary, we will die for them again, with or without your aid.”

What catches my attention in reading about this interaction of almost forty years ago, was not in fact the comment by this year’s Democratic presidential candidate who, like President Trump, I will leave to American voters to consider and evaluate towards the November election on the basis of a myriad of considerations.

Rather, it is Prime Minister’s Begin repeated reference to the “nobody”. The sense of a Jewish people standing alone, falling alone, fighting alone and dying alone that made me consider the place of our nation across the ages and today.

In history books we do find a people that has been knocked down many times, in many lands including in our very own. Many times there were few or none at all who would or could protect us from the once-mighty empires, regimes and ideologies that bore down on a people. A people that until the mid-20th century rarely had a defense force of its own.

Very often alone. Knocked down but did not stay down.

A reality stretching generations and millennia, straight out of the mouth of a gentile prophet named Bilaam who we meet in this week’s Torah portion, itself named “Balak” after the King of Midian who seeks out this Bilaam figure to curse the children of Israel and thus interfere with their desert advance toward the Promised Land.

God interferes with these cynical plans and each time Bilaam seeks to curse the nation, profound descriptive blessings come out of his mouth.

Yet one statement leaves us uncertain whether it is a blessing or a curse:

“Behold it is a nation that will dwell in solitude” (Numbers 23:9)

Was Menachem Begin simply bringing these words into a modern context? Perhaps the Prime Minister would have judged Bilaam’s words as a curse but was determined that the nation turns it into a strength. That this people can be very much alone but can stand alone. And rise again, alone.

Almost a decade ago Chief Rabbi Lord Jonathan Sacks tackled Bilaam’s ambiguous statement, pointing out that traditional commentators described it as a blessing – the nation as indestructible (Rashi), a nation that doesn’t assimilate (Ibn Ezra) and a nation that maintains its integrity (Ramban).

But relating to the modern day, Rabbi Sacks sends out a stark warning to those who would suggest our being alone and isolated is a blessing today. We can be set apart, we can be unique in our traditions and lifestyle. we are not alone in that. But he says in a very touching expression of his own love and concern for the Jewish people, “if you define yourself as a people that dwells alone, you are likely to find yourself alone and that is not a safe place to be”.

In a 21st century where anti-Semitism has been reinvented in new-old forms and threats send a long shadow over the Jewish community and other groups among the community of nations, this is a time for making new friends and securing allies in the unpredictable world in which we find ourselves.

Menachem Begin, admired still today as a remarkable orator, a special leader of generations that saw the horrors of Europe and the magnificence of a Jewish people and homeland reborn, spoke here in 1982 surely from what his eyes and ears had witnessed, what had been inscribed permanently on his and all Jewish souls.

Israel’s former Chief Rabbi Yisrael Lau has said on this week’s Parasha, this being alone refers to our protecting and reserving our identity, our tradition, heritage, history and spirit. Only then says Rabbi Lau will the nation continue to dwell (ישכן) and to exist. Build bonds and covenants of friendship sure, but never rely solely on others.

Perhaps it takes remarkable leaders like these – Prime Minister Begin, Chief Rabbis Sacks and Lau – to identify when dwelling in solitude will bring upon itself blessing and success and when other times curse and ruin.

About the Author
Michael Lawrence has been Financial Resource Development Unit Head and Chief Development Officer at The Jewish Agency for Israel since 2016. He is a qualified lawyer in Israel and in his native New Zealand and has lived in Israel since 2000.
Related Topics
Related Posts
Comments