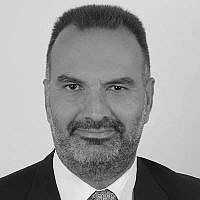 The Blogs
Thomas P. Papageorgiou
Apply for a Blog
Advertisement
Please note that the posts on The Blogs are contributed by third parties. The opinions, facts and any media content in them are presented solely by the authors, and neither The Times of Israel nor its partners assume any responsibility for them. Please contact us in case of abuse. In case of abuse,
Report this post.

Zionism stands at the core of any antisemitic campaign. It is usually depicted as a conspiracy scheme that aims not only to the benefit of the state of Israel, but also at global Jewish domination at the expense of the rest of the world. It is often combined with other absurd constructions like the Protocols of the Elders of Zion etc.

Israelis, and unbiased observers, on the other hand describe Zionism as the political movement whose central idea was that Jewish people needed a state, and they could create one. Zionism seeks to secure for the Jewish people a publicly recognized, legally secured homeland in Palestine. To achieve this goal, Zionism needed to overcome significant difficulties related to

At the core of the whole undertaking was the ‘new Jew’. The Jew who would no longer be passive as a sheep to the slaughter, but the undaunted fighting Jew. Key instruments in the process were education, the army, innovation, and financial reform.

Simply put, Zionism should be a case study for any small state that wants to offer its citizens a fair standard of living. As such, it is anything but exclusively Jewish. It could take other names like ‘Hellenism’, if it were to be properly implemented for the Greeks, Burundism and so on, but from the ridiculous point of view of a strictly Jewish conspiracy theory it simply deprives much of the world many opportunities for a better living.

About the Author
My name is Thomas Papageorgiou and sustainable development is my passion. Thus, there is no more appropriate sector to work for, than the recycling industry. Nevertheless, my hobbies extend beyond my work or my academic studies in Physics. I have a passion for modern history and especially that of Greece and the eastern Mediterranean basin.
Related Topics
Related Posts