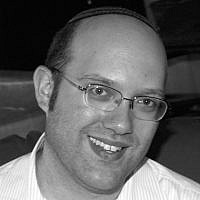 The Blogs
Jeffrey Schrager
Apply for a Blog
Advertisement
Please note that the posts on The Blogs are contributed by third parties. The opinions, facts and any media content in them are presented solely by the authors, and neither The Times of Israel nor its partners assume any responsibility for them. Please contact us in case of abuse. In case of abuse,
Report this post.

I grew up at a time when Ethiopian Jewry was prominent in the minds of Jews around the world. In fact, one of my earliest educational memories involves Ethiopian Jewry. A four year old student at Beth Sholom Nursery School in Rochester, NY, our teachers talked to us about Ethiopians fleeing the land of their birth, heading for Israel. I distinctly remember one teacher pretending to march like a soldier guarding the border (I assume between Ethiopia and Sudan) while we hid and ran to “freedom” when she turned away. The fact that this experience stuck with me speaks to the impression it made.

Several years later, I remember the pride that rippled through the Jewish community when, in May 1991, news broke that Israel had airlifted thousands of Beta Israel Jews in the monumental and record setting Operation Solomon. My community was abuzz with astonishment that 14,000 Jews were brought home. Perhaps then was the first time I heard the oft-repeated line, “it’s the first time a nation took Africans out of Africa to give them freedom rather than slavery.”

Many years later, the energy behind the movement to bring Ethiopian Jews to Israel has faded, which may be understandable given the small number of Jews that remain. In Israel, Ethiopian immigrants faced and continue to confront a myriad of problems, and the passion of many failed to translate to the long struggle over equal rights, absorption, and acceptance.

The truth is very much that the wider Jewish world misses out by not actively strengthening our connection with Israeli Ethiopians. They are the inheritors of a rich and phenomenally meaningful tradition which, though different than that of normative Rabbinic Jews, testifies to their devotion and loyalty to the Torah and the Jewish People. As with all Jews, they never lost faith that one day they would be brought to Israel and Jerusalem, and the reality of their return sanctifies the name of God and is nothing short of miraculous.

At the heart of Beta Israel tradition is the holiday of Sigd. Fifty days after Yom Kippur, the community fasts, wears their finest clothes, and in the past ascended a mountain as one. At the peak, they bowed, prayed, and, facing Jerusalem, yearned for their return. Modeled on a similar ceremony described in Nechemia 9, Kessim, the religious leaders of the community, led participants in communal repentance, a reaccepting of the Torah, and prayers for the return to Zion. Following the service, they descended in joy and shared festive meals prepared the night before. Now in Israel, the Ethiopian community still comes together, though now the mountain they climb in Armon HaNatziv directly overlooks Jerusalem: the city they love so deeply.

Mixed among participants in the celebration are members of other groups within the Israeli and Jewish public. In some circles, Sigd is, indeed, commemorated, but usually superficially and  as curious observers. The more I have learned, the more I have become convinced that the larger Jewish world should embrace Sigd as a holiday and honor it not just as a cultural quirk, but as a deeply meaningful religious festival.

I advocate for the adoption of Sigd for several reasons: First of all, the messages of Sigd are powerfully needed at all times, and certainly in our days. Reconciliation and community reflection are concepts obviously lacking in communities of all sorts. In an age of intense individualism, the Beta Israel’s focus on community and respect act as a prescription for many of our ills. Adoption of Sigd as a religious holiday, not just as a cultural phenomenon, can fundamentally change our communities for the better.

Over and above this basic reason, celebrating Sigd honors our brothers and sisters and their struggle. I came to Israel on a Nefesh B’Nefesh flight. So many of them walked seemingly endless kilometers encountering incalculable hazards to reach Israel. Thousands of Ethiopian Jews died on the journey to Israel and Jerusalem. But, as a community, they didn’t hesitate. For thousands of years, they longed for a return to Zion as deeply and passionately as any other Jew. When they were given the opportunity to come, they did so without a second thought with an idealism few Jewish communities possess. Celebrating Sigd is the first step in a larger project of honoring the commitment of the Beta Israel and ensuring the community is seen by all as an integral part of the fabric of the Jewish People.

As a step in realizing the goal of universal Jewish commemoration of Sigd, I compiled this guide. Written specifically for “outsiders,” my goal is to acquaint the reader with the Beta Israel community in general and Sigd in particular. I specifically focused on the more religious aspects of the holiday because many non-Ethiopians only encounter the day as one of cultural celebration. While far from an expert on any of these issues, I hope it will contribute to the proliferation of Sigd across the Jewish world.

About the Author
Before moving to Israel with his family, Jeffrey Schrager was the Middle School Judaic Studies Coordinator at the Akiba Academy of Dallas, TX. He has developed curricula, particularly for teaching Tanakh and Jewish genealogy, and has published several articles on Jewish education. He is also the founder of L'dor Vador, an organization promoting the use of Jewish genealogy in education and a professional genealogist.
Related Topics
Related Posts