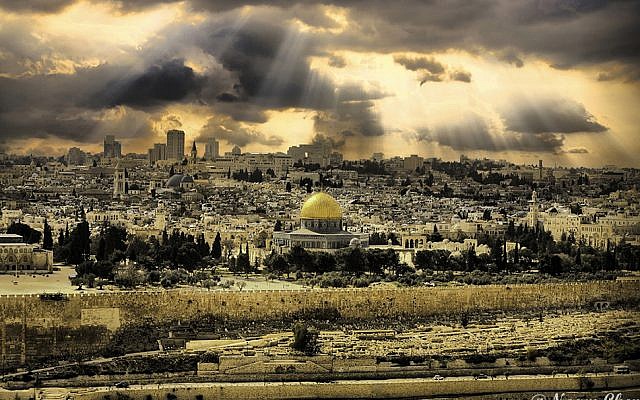 “It was the best of times, it was the worst of times.” – Charles Dickens, A Tale of Two Cities.

The dichotomy expressed in the opening sentence of Dickens’ novel is no less true today than it was then. On one hand, humanity overall has unprecedented material prosperity (albeit not evenly distributed) and technological capability beyond belief. On the other hand, the evil ideologies we thought were defeated in the 20th century, Marxism and fascism, have come back stronger than ever, so that we are witnessing the growing collapse of Western civilization under the assault of Marxism and Islamism, as well as moral decay and spiritual confusion. How does one make sense of it all?

What follows is my personal attempt to endure all this upheaval. I don’t claim to be a prophet.  G-d doesn’t speak to me. I rely solely on the true prophets who foretold the coming of Mashiach and the Ultimate Redemption.

We begin with the wisdom of HaRav Elchonon Wasserman zt”l Hy”d, a man of such noble character that he forsook the safety of America to return to Europe to be with his students as the Holocaust unfolded and was martyred with them. What mesiras hanefesh (self-sacrifice)!

In Rav Wasserman’s monograph The Era Preceding Mashiach [1], he paints a chilling picture of contemporary (in his time) events which lead into our present situation. Briefly, Rav Wasserman holds that, besides the sin of the Golden Calf, we have brought great trouble upon ourselves by trying to be more like the gentiles and adopting their modern forms of idolatry, namely the “isms” of the Enlightenment: democracy, socialism, communism, and Jewish nationalism (Zionism). In our day, we could add animal rights and vegetarianism. All these ideologies exemplify the 19th century British author G.K. Chesterton’s aphorism that when people stop believing in G-d, they don’t believe in nothing; they’ll believe in anything.

Rav Wasserman then quotes the prophet Yecheskel to the effect that Jews wanting to be more like the nations will come to the fore in the era preceding Mashiach, whereas Hashem reminds us “I have separated you from the nations to be mine,” [2] and then warns, “What you have in mind shall never come to pass – when you say, ‘We will be like the nations.’ As I live, declares Hashem, I will reign over you with a strong hand and an outstretched arm and with overflowing fury.”[3])

The Rav goes on to cite Yechezkel 34:4, which describes the characteristics of the generation preceding the coming of Mashiach. He divides the people into five categories: the weak, the sick, the injured (those who have thrown off one or more mitzvahs), the strayed (those who have thrown off the entire Torah but retain a connection to the Jewish People), and the lost (those who are totally assimilated to the point of losing their Jewish identity). Furthermore, as is widely known, the period immediately preceding the arrival of Mashiach will be filled with arrogance and insolence. R’Wasserman continues that this Gemara also holds that no one will be able to reprove or admonish anyone else. [4]

To connect Rav Wasserman’s observations to our own time, we begin as follows:

First, that the Jewish People have done incredible harm to ourselves by adopting modern forms of idolatry should be uncontestable. It is truly tragic that so many individuals of Jewish heritage were (and are) involved in the creation and spread of communism, beginning with its originator, Karl Marx (even though his parents converted and he was raised as a Lutheran), and continuing through Leon Trotsky (born Lev Davidovich Bronshteyn), who commanded the Red Army during the civil war that followed the Russian Revolution; Herbert Marcuse, a refugee from Nazi Germany who became a professor in America and targeted college students as potential converts, as well as developing the doctrine of “repressive tolerance,” that Leftist views would be tolerated while conservative views would be suppressed; and Saul Alinsky, author of Rules for Radicals, which provided operational instructions for the Leftists to take over America’s social institutions in accordance with Marxist theoretician Antonio Gramsci’s plan to undermine Western civil society, whose strength served as a barrier to the acceptance of socialism. “Later dubbed by 1960s German student activist Rudi Dutschke as ‘the long march through the institutions,’ Gramsci wrote in the 1930s of a ‘war of position’ for socialists and communists to subvert Western culture from the inside in an attempt to compel it to redefine itself…. Gramsci spoke of organizations including churches, charities, the media, schools, universities and “economic corporate” power as organizations that needed to be invaded by socialist thinkers…. This full-frontal war of movement to overthrow the existing state and social order will be assured to not only be successful but also permanent.” [5]

It should be noted that the Jewish People have adopted another modern form of idolatry not discussed by Rabbi Wasserman because it developed later and is primarily an American phenomenon. In the words of Rabbi A. L. Scheinbaum, “…as the Orthodox community was picking up steam, [t]here were those who feared an insular lifestyle. They feared being cut off from the newfound friendships they had made and their acceptance into American society. Rather than take pride in their heritage, they began to incorporate sheh’eino shelo, that which was not theirs, into their celebrations and social affairs… Observances included gentile flavor and anything that would convey the message: ‘We are not the old-fashioned Jews from Europe. We are like you. We are Americans.’ Yes, this Jew seeks to inject sheh’eino shelo, that which is not his, into what Hashem wants to be only ours.” [6]. Thus we both displease G-d and arouse the ire of the nations, who reject the idea of our being like them. (Incidentally, Jews who think they can escape from the coming storm by assimilation or collaboration should keep in mind the fate of Edith Stein, who converted to Catholicism and became a nun, yet she was martyred at Auschwitz as a Jew. [7] Equally, Leon Trotsky was proscribed by Stalin and exiled, yet in 1940 Stalin commissioned an assassin halfway around the world in Mexico City to execute Trotsky with the blow of an axe to the back of his head. [8])

Returning to our time, as a prime example of contemporary arrogance, Dr. Philip Carl Salzman, president of the Scholars for Peace in the Middle East, writes:

“Woke verities have spread into the business community, unions, the civil service in the U.S. and public service in Canada, and the military in both countries. Such truths that are recognized and that must be repeated are, 1) any disparity in status or benefit among racial, sex, sexuality, or ethnicity census categories must always be due to bigotry and discrimination, but never to performance, achievement, or preference; 2) the 0.001% of African Americans killed in encounters with police is sufficient evidence of systemic racism in America, whereas the 99.999% of African Americans murdered by criminals, 90% of them black, are unimportant and not to be mentioned; 3) any person, even a child, can become a different sex by just saying so, and everyone else must accept such claims as unchallengeable truth; 4) the southern border of the U.S. is closed, and, anyway, illegal aliens are more American than actual U.S. citizens are, and deserve more benefits than citizens; and 5) America has always been about slavery and nothing else, and Canada has always been about colonialist genocide of indigenous natives and nothing else. All of the institutions in Canada and the U.S. have accepted these woke verities, and actively work to silence and cancel those who dare to express different views. Anyone who dissents from these truths must be canceled or, preferably, incarcerated.”[9]

And point (3) above is an example of supreme arrogance, as the current multiplicity of genders  directly contradicts the Torah, namely the Biblical verse “So God created Man in His image, in the image of God He created him; male and female He created them,” by denying gender is binary and determined at birth. [10] This conceit has carried over even to the medical profession, as the American Medical Association now recommends that states no longer record gender on birth certificates, so the child can determine its own gender once old enough, and medical schools are teaching that gender is not fixed (never mind the 23rd pair of human chromosomes that determines gender: XX female, XY male) [11]

Finally, as examples of people not accepting rebuke, consider these references:

Dexter Van Zile, “Presbyterian Clerk Doubles Down Against Israel, But His Critics Man the Barricades,” The Algemeiner, January 26, 2022, https://www.algemeiner.com/2022/01/26/presbyterian-clerk-doubles-down-against-israel-but-his-critics-man-the-barricades/?fbclid=IwAR3XJu7LDc%E2%80%A6

In part 2 of this post we will consider in greater detail how the aforementioned characteristics of the “birth pangs of Mashiach” are affecting the Jewish People.

About the Author
I'm a native New Yorker (Brooklyn, to be precise) transplanted to the desert as a teen-ager. I hold a Ph.D in Physics from Stanford and have taught mathematics and physics at the high school, community college, and university level. I'm an adult ba'al teshuvah and label myself as centrist Orthodox and a Religious Zionist along the lines of OU, Yeshiva University, and Mizrachi.
Related Topics
Related Posts
Comments