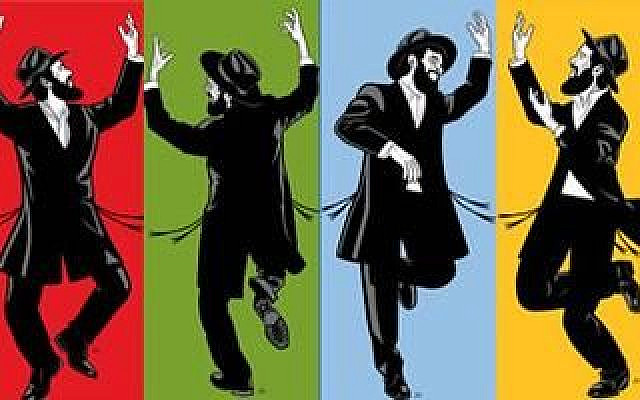 After three weeks of heavenly (if endless) holidays, from Rosh Hashana to Simchat Torah, today is a quiet Thursday, the first day of the rest of the year, and I am finally able to take my first non-holy breath and catch up with my daily routine.

It’s hard not to look back and recall the Yomtov’s highlights in entering the new year, and with Simchat Torah still fresh in my mind, I think of all the dancing and happiness that permeated the Chag.

Following Shacharit at Boyaner, my Shtiebel for the past six months, my friend Mordechai suggested: “Why don’t you write about the young men who rocked our Simchat Torah Hakafot?!”

I hesitated at first, not wanting to bore the shul members with my personal musings. But then I realized how unique this experience was from the traditional Hakafot I used to attend in the various congregations I’ve belonged to over the decades. The shuls that I went to tended to have large crowds on Simchat Torah; from the Carlebach shul in the 1980s, when we originally lived at the Upper West Side, where Reb Shlomo led packed, ‘standing room only’ services, to many decades in suburban shuls. Hundreds of congregants and guests, young and old, filled the shuls, the yard, and often spilled onto the street. It was a scene! I appreciated the Simchat Chag and the joy of dancing with so many people that I’ve known over the years.

Being back in the city, I expected to go to Carlebach since I’ve stayed in touch over the years with Reb Naftali Citron, its leader and the grandson of my Rebbe, Elichaim Carlebach ZTS”L. But on second thought, I decided to head over first to Boyaner to join the people with whom I’ve been davening every day. I was surprised to find a small gathering of about twenty men, comprised of family members and children, and though the Shtiebel is not large, the smallish crowd was unlike the Simchat Torah gathering I’d expected.

I stayed on and as the Hakafot proceeded, I learned to appreciate the intimacy of a small, close group who’ve been together for decades, many of whom are related or have children married into each other’s families.

The first two Hakafot were just an opening, preparing for the third, when all the Heavens broke loose. The congregants’ sons, young men in their twenties, wearing their black hats and suits, started taking over. Their dancing and singing came with more energy, Kavana and excitement. I wondered if they were recalling being back in Yeshiva and dancing with their rebbes, but then I realized that this has been their upbringing and the Simcha with which they marked the Chag is not new.

Fathers and sons started the Hakafa, each holding a Sefer Torah, going around the Bima, singing, until the young men took over. They sang into the Heavens, changing tunes, changing dance moves, hopping up and down, until it was hard to keep up.

Running the Hakafot were various congregants, but it was Ding who carried the singing, tapping into his decades of experience with Jewish music. Each time he’d come close to ending the Hakafa, the young men, Judah, Harry and Leon’s sons and sons-in-law, to name a few, kept it going, starting afresh and carrying it on, singing and jumping their hearts out. If it had gone on a little longer, even Moshiach wouldn’t be able to stay away, I thought.

While I’m used to the larger festivities, with huge crowds that appear more like I was in Yerushalayim, in the middle of a Temple-like ceremony, this intimate celebration left me with a new feeling of Achdut, of togetherness. I imagine that this heightened joy and spirit is what people can achieve after spending decades together. It seemed as if we were all one large family.

Though I was new, unknown, and untested – I felt honored to be part of it. The whole experience made me think of Unconditional Love – Ahavat Chinam.