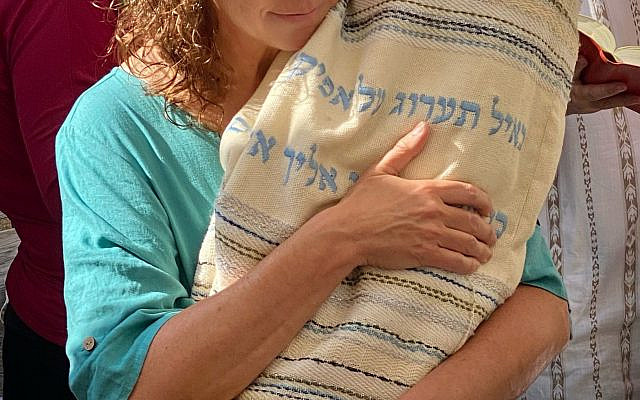 Woman holding a Torah [Laura Ben-David]
There is a quiet revolution rolling through the Orthodox Jewish world, noted particularly on Simchat Torah. This holiday has always been the pinnacle of joyful, religious Jewish torah experience. A jubilant celebration of singing, dancing and true euphoria! If you were a man.
The women’s experience usually involved sitting and gabbing in the ladies’ section, perhaps with the partition opened for viewing the main event from afar. Sometimes brief women’s dancing would break out, but it was completely secondary and with nary a Torah in sight.
Many women are completely comfortable with the ‘second-class’ status (call it what you like, I simply can’t see it as anything else) and will quietly go along with their children – if they have – or their friends, or alone, and be spectators at what’s supposed to be the biggest Torah celebration of the year.
But slowly, slowly women are starting to speak up. They’re not satisfied with merely watching. They’re feeling disconnected. Unimportant. Ignored. Second class… And many are not standing for it any longer.
Slowly, slowly, Orthodox synagogues have begun recognizing that women are people too. Important people. And that alienating women is quite counterproductive to maintaining a cohesive, flourishing community.
It takes time, though. And patience. And demands… We need to ask for what we want, need, crave! And sometimes just make it happen ourselves. But it is doable. And it is happening.
Some synagogues have recognized that women need to physically connect with the Torah. So they give them a Torah to dance with, but they must take it elsewhere. Like to a park. And there they can dance to their hearts’ content. It’s definitely something. Maybe enough for some. But still demeaning to have to literally leave the sanctuary in order to celebrate the Torah.
Others have made much further strides. Some have finally reached the point of sharing the Torah scrolls equally between the men and women so that no one feels like they’re second class; that anyone who wishes to dance with the Torah can celebrate freely and joyfully! They can be a part of this ultimate religious experience without sacrificing their own religious identity.
Having been one of the women who has searched and craved these experiences, I can assure you they exist! Do not settle, it is truly possible. In recent years, I have been lucky to find deeply meaningful experiences, again and again.
This year stands out particularly.
I was with my family at an Orthodox synagogue in Jerusalem on Simchat Torah night. They had moved the dancing circles to the spacious courtyard outside in the crisp early fall air, under the stars. It was the last hakafa. For that final one, they called for “soldiers and parents of soldiers.”
My son had just been drafted into the army and was with me that night.
My eyes were misty as I was handed a Torah scroll and danced, with so much joy, surrounded by my daughters and granddaughters. Then I looked across to the men’s circle and saw my soldier son dancing with a Torah scroll as well.
Don’t settle. The Torah is all of ours.
About the Author
Laura Ben-David is a photographer, public speaker and Israel advocate. Inspired by her Aliyah experience, Laura began writing and never stopped. She is the author of the book, MOVING UP: An Aliyah Journal, a memoir of her move to Israel. She has spoken all over the world about Israel, Aliyah and other topics, often with beautiful photographic presentations. Formerly the head of social media at Nefesh B'Nefesh, Laura is the director of marketing at Shavei Israel as well as a marketing consultant.
Related Topics
Related Posts