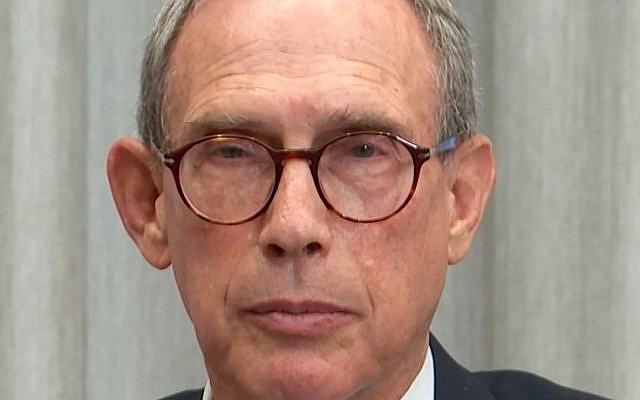 We need Nachman Shai like a hole in the head. Mr. Shai has been appointed Diaspora Minister in the Israeli government and that makes him a welcome gift for every antisemite in Britain. Among other faux pas Mr. Shai has already made is to tell us that “Israel is your country as much as my country”.

No, it isn’t Mr. Shai. My country is Britain and while I hope that Israel flourishes, the accusation of dual loyalty, which British antisemites have used as one of their main accusations against the community for over 100 years, is only strengthened by Mr. Shai’s statement.

If there is one thing the community has striven to prove over 350 years, it is that we are only loyal to Britain. The aim of Zionism has always been to label us a nation rather than a religion. No hard feelings; the 1904 Alien’s Act which was the result,  is  in the distant past, but Mr. Shai  isn’t helping by his appointment.

Of course Mr. Shai purports that it is to tackle the accusation that is often made, that Jews in the diaspora should not criticise Israel. He says “We welcome criticism from you and anyone, and we can argue about things.” As Israel is a democracy, though, argument and criticism are meaningless unless you can throw the government out at the ballot box. As, quite rightly, we don’t have a vote in Israeli elections, any criticism cannot alter the manifesto of the government because there is no penalty for ignoring us.

We are told that the Progressives in Israel “are furious a 2016 agreement for an upgraded area for their prayers (at the Western Wall) was never implemented because of political pressure from strictly-Orthodox parties”. Yes, political parties can bring pressure to bear, but not foreigners without a vote – which means us.

Now, of course, the Diaspora minister is a face saver appointment for those who make charitable offerings to Israeli institutions, but whose political views are ignored. We now have a minister who says “I’m your man in the country and in the government”. To do what? To tell the Israeli cabinet that there is a wide range of views about their policies. What is that going to change?

In the past in America, Mr. Shai has treated the Orthodox, the Conservatives and the Progressives exactly alike and considers that this is good training for the Diaspora portfolio. It might have been useful in America, but with something less than the best will in the world, the different communities in Britain do not see their way clear to their religious views having equal relevance and authority. Mr. Shai would be well advised not to go down that road.

The appointment of a Diaspora minister certainly gives the new Israeli government another department whose objective is to put over the government’s case. To justify their policies, they can use all the help they can get. Getting even closer to the leaders of our community may well assist this.

I think it unlikely that our leaders will be taken in. The thinking is just a little too obvious. To prove its genuine ambition to let the diaspora influence Israeli government policy, you’d have to get the diaspora communities to speak with a single voice; which will happen when I see an elephant fly, and there are a lot of elephants in this particular room.

Mr. Shai is 74 years old. May he live to be 120, but he should remember when Chief Rabbi Jacobovits criticised the Israel government long ago. Was his criticism welcome? It wasn’t so much a matter of argument as one of denunciation. The Chief Rabbi was not popular, but then nothing changed.

I have no intention of commenting on the Israeli government’s policies. It’s none of my business and it would be a waste of time anyway. Unfortunately, Mr. Shai is not there to take the same view.