July 28 marks the beginning of the month of Av in the Hebrew calendar. At this moment, we are in the midst of a three week period called Bein HaMetzarim (Between the Straits) in which Jewish tradition marks not only the loss of the first and second Temples of Jerusalem, but many of the tragedies that befell our people over the ages since biblical times such as the worshipping of the golden calf, the expulsion from Spain, and the outbreak of World War I.

This time of tragedy culminates in a fast day, Tisha B’Av, the ninth day of the month. At this same time, in the summer in 1941, many of Lithuanians were busy participating in another Jewish tragedy – slaughtering hundreds of thousands of our Jewish brothers, sisters and the very future of Jewry, our children.

Fortunately, after the month of Av comes Elul. We transition from a communal period of mourning in Av into a much more introspective period of returning to G-d in Elul. We call this return Teshuva. Reconciliation with G-d must be preceded by reconciliation with others who we have wronged. This involves not only the private act of confession for sins against G-d, but also the ideally public act of confession for sins against individuals.

Teshuva not only requires an honest admission concerning past wrongs, but also the concerted effort to repair the damage to others resulting from the transgressions. Teshuva begins in Elul and culminates in Yom Kippur after the Ten Days of Repentance between Rosh Hashanah and Yom Kippur.

Unlike Christian contrition and confessions, atonement does not leave a clean slate. While we acknowledge and apologize for our (intentional or not) transgressions, without keeping an accurate respect and truth about our past, we would indeed be sinning by omission.

Too much of our blood has been spilled and too many tears shed to not keep a keen awareness of our history as we prepare for a New Year. We cannot allow or condone ignorance and deliberate historical revisions of every horrific incident thrust upon us, the Jewish people.

Admitting to previous sins and stopping further lies, denials, and revisions would be the first step on a long road to eventual redemption. Until then, what remains hidden and irrational in order to elevate purely evil criminals will continue to constitute the deliberate sin of omission.

And so the Lithuanian government’s commonly known transgressions against Jews are not just murder, robbery, dehumanization, negation of person, and other violent antisemitic acts, oftentimes, they are also sins of omission. 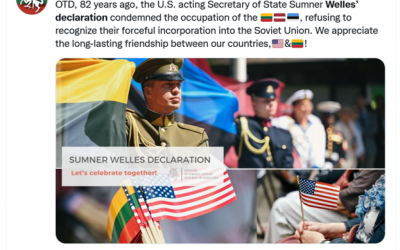 Lithuania has just celebrated the 82nd anniversary of the Wells Declaration – a statement from America that USA would continue to recognize the independence of the Baltic states, even with the Soviet occupation. What was missing from Lithuania’s celebratory statements were explanations how the Lithuanians Embassies and national expenses were funded during this occupation period. Was it from Jewish owned deposits into Lithuanian Banks, held in foreign countries?

What the Lithuanian government does NOT say, is usually even more important than what they DO say. I have written extensively about blatant Lithuanian government fraud, and have exposed Lithuania internationally as a country without morals or integrity. US Congress has shown how Lithuania repaid American faith and loyalty to Lithuania by their misuse of American Congressional communications to commit Holocaust fraud. Exposure of Lithuanian deceptions are met with insults to our most senior legislators.

These sins of commission and omission have continued, until the newest and their most mind boggling lie to date: 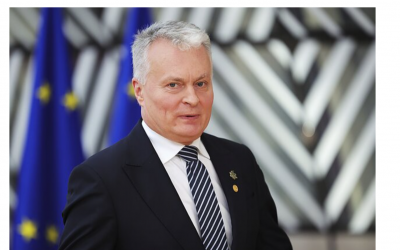 The President of Lithuania is calling on OTHERS to tell the “truth” about history! His statement echoes exactly what I have been demanding of Lithuania these past many years: “Without an accurate, honest, and comprehensive assessment of the past, we will not be able to effectively prevent future crimes on our continent or investigate the current ones in Ukraine,”

Lithuanian President Gitanas Nausėda is an active participant in the rewriting of Holocaust history in Lithuania. His prior representations to world leaders called for historical truth while his efforts and actions were the exact opposite.

His new, finely honed statement, does not mean what others think it means; and this is intentional. Nauseda demands his version of truth about Russia be accepted worldwide, but the truth about the murder of Jews by Lithuanians remains silenced. Lithuania should be allowed to lie with impunity.

The last time President Nauseda spewed such a vile and deceptive narrative was in front of the Israeli and French Presidents, this time, it was in front of Romanian President, as well as the Estonian, Latvian, and Polish Prime Ministers. Nauseda clearly has no concerns about lying directly to the faces of world leaders.

It is time the leader of Lithuania took a proper look in the mirror, and asked himself if the Emperor has no clothes. No wonder it is estimated that almost 50% of Lithuania’s population will have voluntarily abandoned their country by 2050. It is not possible to sustain a country when the leadership is morally bankrupt and that the only assumption foreign leaders can make, is that when the President is communicating, if he is not lying by commission, he is lying by omission.

To Nauseda, murdered Jews have so little relevance, that the murder of 220,000 Jewish Lithuanians by their co-citizens does not enter his consciousness when demanding truth from others. The insult towards us is even greater if we recognize that it might not even have been a lie of commission or omission – rather, just utter contempt towards us.

In our time of transition from Av to Elul, never forget what was so brutally taken from us and then uplift ourselves to new heights.