Never previously having encountered truth from the Lithuanian government, I was excited to read of Lithuanian President Nauseda’s words to the international community. He said: “We must fight attempts to distort history”. For a brief moment, I was buoyed by hope.

These words were expressed in front of Israeli President Herzog, French President Macron, and US Secretary of State Anthony Blinken, at the International Forum on Holocaust Remembrance and Combating Antisemitism.

Nauseda himself had exposed the Lithuanian Judiciary for being corrupt and for selling verdicts. To me, this signaled a somewhat honest man. I had hoped that promises about Holocaust distortion stated in front of such a high profile audience of world leaders, would have been delivered with dignity, sincerity and honesty. I even said so in my articles “Fit for High Office?” and “The themes of hate”.

With hopes in Nauseda’s honesty, on November 2, 2021, I sent him a letter asking him to revoke honors for just two Holocaust perpetrators Lithuania has unctuously declared national heroes. I only asked for two, bearing in mind there are many. Nauseda’s words were the first glimmer of hope for truth in Lithuania, and so I started with just two.

President Nauseda governs a country that murdered 96.4% of its Jewish population. Only 0.04% of Lithuanians are found to have rescued Jews, which leaves 99.96% of Lithuanians either perpetrators, enthusiastic bystanders or have insufficient proof of their unsubstantiated claims of being rescuers. Notwithstanding this disgusting history, Lithuania has a well exposed and extensive government program to distort history into a narrative of rescuers, victims and heroes. These fairy tales are combined with an extensive diplomatic effort of outreach to Jews to cement their fictional history, and for their own financial gain. 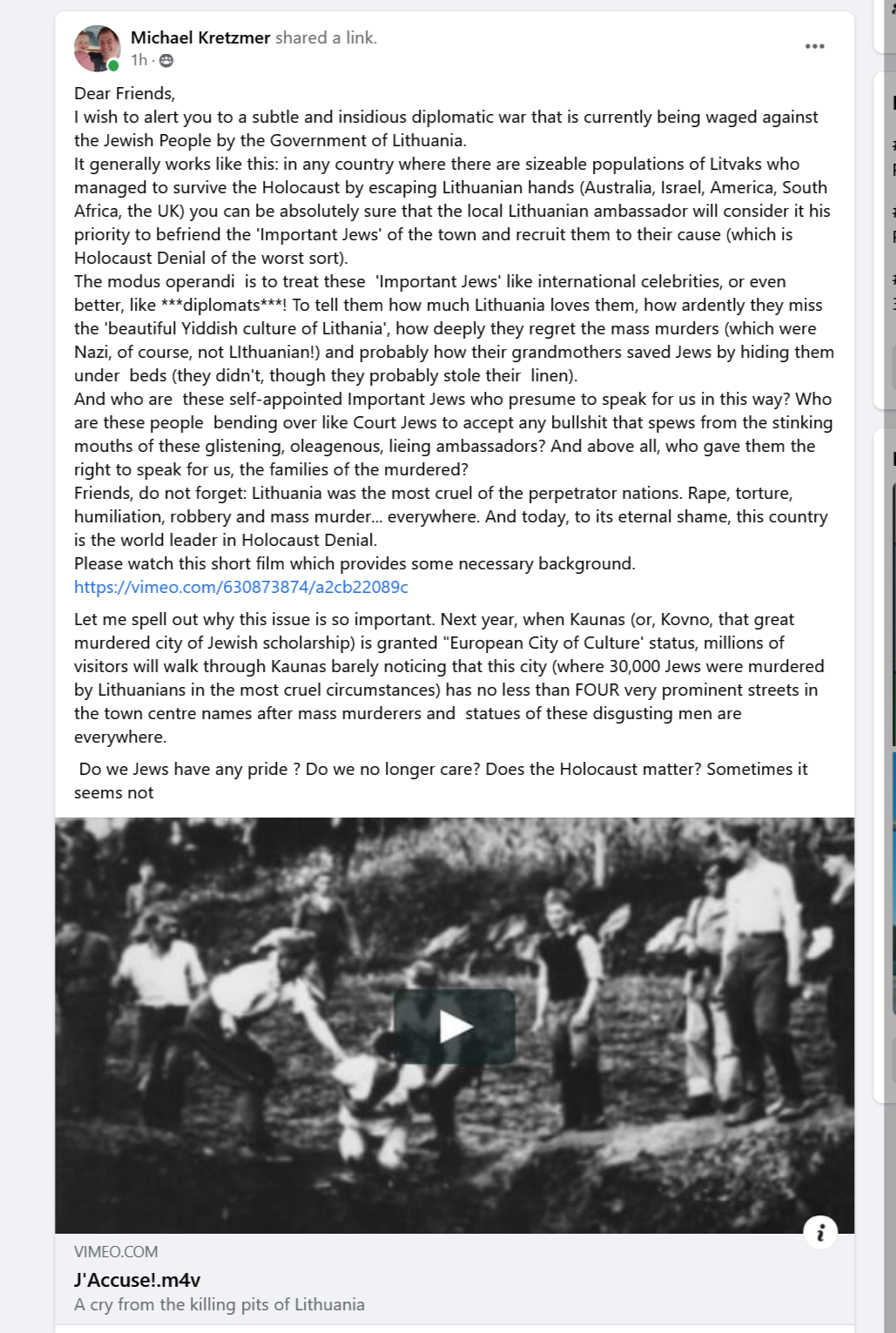 Nauseda did not answer. Silence is, in and of itself, a reply. It means he has nothing to say, and will not be making changes to his official national policy of historical fraud because it was after all, “Just Jews”. As such, blood cannot be washed away from Lithuanian hands. Nauseda’s direct words to Herzog, Macron and Blinken were lies.

That the President of Lithuania would look his European and American counterparts in the eye and blatantly lie without the slightest glimmer of shame begs the question – is there anything about which Nauseda will not lie? Apparently not. When a national leader has no honor, nothing they say can be accepted at face value. Their perception of truth is a twisted amalgamation of fantasy, falsehoods and buried facts.

Truth will not be forthcoming from Lithuania during my lifetime, nor that of my son’s.