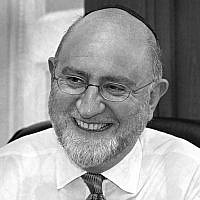 The Blogs
Henry Grunwald
Apply for a Blog
Please note that the posts on The Blogs are contributed by third parties. The opinions, facts and any media content in them are presented solely by the authors, and neither The Times of Israel nor its partners assume any responsibility for them. Please contact us in case of abuse. In case of abuse,
Report this post.

The confirmation from Sir Mick Davis this week that he is stepping down as chair of the Jewish Leadership Council (JLC) marks the end of an era. I was Mick’s predecessor as the JLC’s first chair and have watched as he has raised its profile and ambition.

There are few people whose reputation polarises our community like him. There are those who feel that he has professionalised our community, improved our systems and taken us away from a model that wasn’t productive. On the other end of the spectrum, there are those who feel he is an undemocratic leader who has imposed his views on the community; that he has been at odds with the community due to his views on Israel.

However, I have no doubt that Sir Mick has left the community in a stronger position than when he first appeared as chairman of UJIA.

As chair of the JLC, he has presided over a significant expansion in its membership and its remit. His vision and strategic thought led the JLC to institute Commission on Jewish schools, from which emerged Partnerships for Jewish Schools; on Women in Jewish Leadership, from which came the Women in Jewish leadership programmes; on Informal Provision for Young People, from which came Reshet and on Synagogue Vitality.

He strengthened the JLC’s political engagement and its structures to counter the boycott, divestment and sanctions movement (BDS), raised the funds to counter delegitimisation of Israel and spoke strongly in support of leadership development, and Jewish and Israel education.

I also worked with him in his role as chair of the Prime Minister’s Holocaust Commission. He was a superb chair, who gently and skilfully led a distinguished group of Commissioners and the government to accept the proposal to build a fitting memorial to the Holocaust in the very heart of London.

He has been immensely generous in his philanthropy, and his time, with countless organisations benefiting from his generosity. This legacy of generosity will last well beyond his time with the JLC.

I am, however, one of those who has been uneasy about the expansion of the role of the JLC and the direction in which it has gone. I feel it has mixed its message and diluted the original intention of its founders.

However, Sir Mick has recognised this and has instructed CEO Simon Johnson to undertake a consultation with council members on what they feel should be the JLC’s role in the coming years.

This reflects one of his characteristics that I most admire.  A man of strong and principled opinions and views, he is also a sufficiently strong and confident leader to be able to listen to opposing views and, if a sufficiently good case is made, to amend his opinions accordingly.

He is deeply and passionately committed to the long-term well-being, strength and sustainability of our community.

Few people care as deeply as he does or demonstrate that care as openly.

There is no doubt Sir Mick will continue to contribute to the Jewish community. During his time at the JLC, he has revolutionised it and had a huge impact on the community.  I admire him greatly.  We will all miss his passion, his vision, his strong leadership and his generosity.

I hope the organisation will thrive, but its new chair will have quite an act  to follow.

About the Author
Henry Grunwald is a founder and first Chairman of the Jewish Leadership Council, a former president of the Board of Deputies, and is a criminal barrister.
Related Topics
Related Posts
Comments