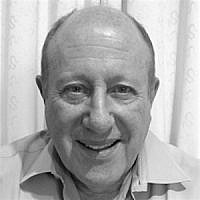 The Blogs
David Hersch
Apply for a Blog
Please note that the posts on The Blogs are contributed by third parties. The opinions, facts and any media content in them are presented solely by the authors, and neither The Times of Israel nor its partners assume any responsibility for them. Please contact us in case of abuse. In case of abuse,
Report this post.

Sisyphus is a figure from Greek mythology who, as king of Corinth, became infamous for his general trickery and twice cheating death. He ultimately got his comeuppance when Zeus dealt him the eternal punishment of forever rolling a boulder up a hill in the depths of Hades. He is nowadays best remembered as a poignant symbol of the folly of those who seek to trifle with the natural order of things and avoid humanity’s sad but an inescapable lot of mortality. The adjective Sisyphean denotes a task that can never be completed.

“It is not your responsibility to finish the work of perfecting the world, but you are not free to desist from it either.” — Rabbi Tarfon, Pirke Avot 2:21

Rabbi Tarfon goes on to say: “Do not be arrogant; do not think that you alone can finish the job. Trust in your children and generations yet unborn to take up the task. Know that you are part of the living chain of people who have dreamed, worked for a better world and carried on this mission for four thousand years in an unbroken covenant”.

What drives me to discuss these stories and quotations? Last night I watched a YouTube program of Intelligence2, a British BBC debate program on the subject “Anti-Zionism is Anti-Semitism”. Speaking for the motion was Melanie Phillips, Pro-Israel journalist, broadcaster and author, and Einat Wilf, Israeli politician, and against it was Ilan Pappe, Israeli-born historian and anti-Zionist activist, and Mehdi Hasan, Journalist and Al Jazeera broadcaster. What was evident from the start just looking at the audience and immediately getting a feel for the atmosphere before anyone spoke was that Melanie Phillips and Einat Wilf faced a Sisyphean task which both bravely, logically and factually tackled. Perhaps a more aggressive attacking approach might have been better. Hasan was aggressive and should have been replied to measure for measure and even more.

You can watch the video here: https://www.intelligencesquared.com/events/anti-zionism-is-anti-semitism/

It is not being ad hominem to look at what Ilan Pappe is. It is important to know where he comes from and what his agenda is. His books are not published in Hebrew and are not intended for Hebrew readers. They are published in Arabic and English. Their contributions to the understanding of history are negligible. To make a mark as a historian, the historian often has to have some controversial take on an issue. What this tells me in Pappe’s case is he found a market amongst the Arabs and haters of Israel and panders to it. Then with time he got locked in and didn’t have the honesty, courage or simple temerity to review what he had written and stated, and therefore will spend the rest of his life pushing his questionable and dishonest version of history. Let’s face it, there are more Arabs, anti-Semites and Jew-haters in the world than Jews, which makes a sizable market.

The well-known historian Bennie Morris says of Pappe, “At best, Ilan Pappe must be one of the world’s sloppiest historians; at worst, one of the most dishonest. In truth, he probably merits a place somewhere between the two.” He is not highly regarded in academic circles and is regarded as belonging to a fringe group known as the New Historians. He is acknowledged not only as anti-Israel, by his own admission, but has also been quoted as such.

I don’t want to labor Pappe too much, but he is quoted as saying that in analyzing historical facts do not matter. He writes and speaks in an unbalanced manner as he himself declares he does. In the debate, you will see how he comes over abusing emotional appeal and what on the shallow surface sounds fair, right and humanitarian. You will see his untruths and how he perverts the facts.

When academics encounter a new idea that doesn’t conform to their preconceptions, there’s often a sequence of three reactions: first dismiss, then reject, and finally declare it is obvious (Sloman & Fernbach, 2018, p. 255)

Pappe’s great value to Israel’s enemies is that he is a Jew and as is often the case, they will find one discombobulated Jew and trot him out to show just how wrong and bad the remaining fifteen million Jews in the world are.

When it came to emotional appeal wrapped in what appears to be sane logic, Mehdi Hasan was extraordinary. In his loud bombastic persuasive style, he had the audience eating out of his hand. It really is worth watching him. Give him credit for his oratory, but I was reminded of Hitler’s oratory and his ability to sound logical and dish out ideas, concepts and lies as if they could not be disputed. Hasan has the art of effective and persuasive speaking, especially the exploitation of figures of speech and other compositional techniques off pat and exploits it.

When it comes to Islamic rhetoric, there is nothing original in anything the Islamists, BDS or any of them say or do. It is the same old repetitive hogwash and accusation no matter how many times the untruths and accusations have been disproved. The theft of other’s history, or concepts. Israel has a Right of Return, so now the Palestinians have one too. South Africa had Apartheid, so now, untrue as it is proven to be, Israel is accused of Apartheid endlessly. The Jews, unfortunately, have antisemitism, so, in a clever cloning of the idea and in anticipation and as an unjustified weapon, the Islamists invented Islamophobia, which is rolled out to a stupid world that really has no clue and every time it is used cringe away. When it comes to propaganda, the Islamists are hard to beat in this current world. They appeal to fertile ground.

Despite Hamas’s war crimes against both Israeli and Gazan civilians, and despite the incitement to mass murder of Jews by the Palestinian Authority or Hamas and the consequent terrorist attacks on Israelis in Jerusalem that preceded the recent hostilities in Gaza, the western media added to this incitement by recycling Hamas propaganda and falsely depicting the Israelis as wanton killers of Palestinian children. Are we then surprised that the audience at this Intelligence2 debate had already voted that anti-Zionism is not anti-Semitism before the debate and increased their vote at the end?

Western elites who, if they aren’t actually taking part in this war against the Jewish people either on the streets or in the media, are piously wringing their hands, but not taking the action necessary to put a stop to it. The flimsy veil has therefore been torn off the hypocritical west to reveal a culture that is predominantly either hostile to the Jewish people or indifferent to their fate.

I am a Jew and I am a Zionist and quite honestly I don’t care if someone is anti-Zionist, anti-Israel, antisemitic for whatever reason. In obvious reality, it is their loss, and I mean it. Zionism is the belief that the Jewish people have a right to live in their ancient biblical homeland and nothing more.

Who cares whether these limited or agendised people don’t think anti-Zionism is anti-Semitism? It is anti-Semitism in its latest morphed form and the Intelligence2 audience and program on this issue might spend ninety minutes of entertainment on TV, but it means nothing, has no effect and quickly fades the minute a new program comes on the screen. The audience goes home and more importantly, Israel and the Jewish people are still here and go on.

My mother was a Cohen and that means I can trace my ancestry to Aaron, brother of Moses, who, obviously, I am also related to. Isn’t that wonderful! Actually, it is amazing! Is there any other people who, without the aid of DNA and Ancestry.com, and even then, can trace their history and ancestry like the Jewish people? Is there another people who still celebrate events in their history as we do such as the Passover, where we commemorate leaving Egypt and being slaves and gaining our freedom and nationhood? Is there any nation that commemorates living in impermanent makeshift tabernacles in the desert thousands of years ago? Is there a people that celebrates thousands of years later getting the Torah and the Ten Commandments on Mount Sinai or something similar? Is there a people that for thousands of years have and celebrate an ecological holiday that reminds Jews of our connection to the earth and to our role as caretakers of the environment referred to as the Birthday of the Trees?

In all humility and with much sorrow and pain, my people, the Jewish people have survived through it all and I know that with G-d’s help, we will survive all our enemies, all the anti-Zionists and their misguided and faulty morality. The Ilan Pappes and Mehdi Hasans are meaningless. In so many ways they are a paralyzed force and they are filled with gestures without motion. These are empty men. We have survived all the slings and arrows of outrageous fortune that the world have flung and fired at us in spite of the colossal cost. I quote the magnificent description by TS Eliot of people like Pappe and Hassan:

We are the hollow men
We are the stuffed men
Leaning together
Headpiece filled with straw. Alas!
Our dried voices, when
We whisper together
Are quiet and meaningless
As wind in dry grass
Or rats’ feet over broken glass
In our dry cellar

Those who have crossed
With direct eyes, to death’s other Kingdom
Remember us-if at all-not as lost
Violent souls, but only
As the hollow men
The stuffed men.

So be an anti-Zionist, spread your filth, pseudo morality, misguided convictions and glib shallow persuasion wherever you like and my people and I will oppose you, and if required, fight you by all the means available to us. We will not go quietly into the fading light. It doesn’t matter how glib your protagonists are, how persuasive and how vacuous the audience and followers are, we will stand proudly as civilized human beings knowing our destiny is to be a light unto the nations. We know it is a destiny not handed to us on a silver platter, but one we have to fight for over and over again in each generation. If truth be known, all the antagonism against us strengthens us and draws us together as one. In the end, whatever that may be, unlike Sisyphus, we will roll the large rock of antisemitism over the hill and watch as it rolls down destroying all our enemies in its path and proving to them what sightless, outrageous, misguided and immoral fools they have been.

Thus it is with all the anti-Zionists and antisemites. However, those of us who live in the real world, who apply the knowledge and brains we have, know without any doubt, anti-Zionism does equal antisemitism.