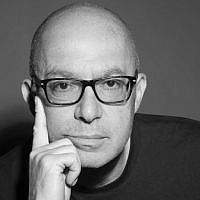 I arrived at a clearing in the forest. They had set up an impromptu battalion headquarters, which was a hive of activity, but there were no tents. Officers were huddled around a makeshift table. Another group were sitting on some logs drinking what appeared to be bottles of beer. Mechanics were working on a couple of “Zeldas,” armored personnel carriers. Each company had marked out its own space, somewhere in the surrounding forest.

It had been more than a week, since the first night of the war, when we were dropped by helicopter 70 kilometers behind enemy lines, where the Awali river meets the Mediterranean Sea. It had been a hard slog, fighting on the move all the way to Beirut. After achieving our objective and taking the junction at Kfar Sil at the southern entrance to the Lebanese capital, we were relieved and brought back from the lines for a welcome and much-needed break.

I walked up to Regimental Sergeant Major Hazazi, wondering what he could possibly want with me, and worried at the prospect. As the sergeant major of the 50th parachute battalion, the man’s job was discipline and handing out punishment. For the six months before the war, he had busted our balls, at every opportunity. Now, he had summoned me by name, much to the chagrin of my friend Effi, who had been sent to find me, and as it turned out, switch me out of guard duty.

What could this son of a bitch want from me? For the last week, all I had done was fight this fucking war. As I walked up to him, he screamed something at a mechanic working on a tank next to where all the officers had gathered. I wasn’t sure what he shouted, but it made me jump. After the bullets, rockets and bombs, the crumbling buildings the general chaos and cacophony of war I had encountered over the past week, you wouldn’t have thought that one guy shouting could make me jump, but it did.

“Cohen, you’re Scottish, yes? You grew up in Scotland?”

“Eh, yes, Sergeant Major.” I was confused by the question.

“Good, I thought so. Take this.” Hazazi picked up a beer from a crate and handed it to me. “Go sit over there. See where the deputy battalion commander is sitting with the others. The game’s about to start.”

I looked over to where the officers and NCOs were sitting. More had gathered, along with a variety of combat support troops, drivers, mechanics, and a bunch of others I didn’t recognize. They all sat gathered around the tank that was being worked on. I could see now that the guy working on the tank, the one Hazazi had shouted at and made me jump, had actually been hooking a television up to the tank’s battery and getting the antenna to work.

I didn’t get it. I had absolutely no idea what was going on. Hazazi saw my confusion.

He approached me smiling. “Scotland, Scotland – Brazil. You are playing Brazil, the Mondial, the World Cup, the game, the game is on now. You have got to see this game. Go, sit… but it’s Brazil. You have no chance, none whatsoever.”

Then it hit me… The World Cup, the fucking World Cup. Ordinarily, I would have blocked out my calendar and spent three weeks, it was only three weeks back then, delighting in the twists and turns of the greatest sporting event in the world, which happens only once every four years. But here in the middle of a war zone, having been doing nothing but walking, running, shooting, and being shot at for the past week, I totally forgot about it. To be honest, with all that was going on, it was hard to really give a shit. One guy, who did give a shit though, was our Company Commander, Erez. I learned after the war, that he actually had tickets and was supposed to travel to Spain for the finals. But here he was, leading us into action. That really sucks.

It was hard to fathom that while we were otherwise engaged, the rest of the world continued as normal, and Spain’s football extravaganza had begun, totally oblivious to the chaos and carnage in Lebanon.

It had only been four years since I sat in Glasgow glued to the TV, a specky teenager watching the escapades of Ally’s Army in World Cup ‘78, in Argentina. It felt like a lifetime. Fast forward four years and the competition must have started around the time I narrowly escaped the blast from an RPG missile, in the thick of a firefight with Syrian commandos to take the Kfar Sil junction. Life is strange indeed.

I thanked Hazazi for the beer and for the thought. As I walked towards the seated crowd, they made a space for me. Being the only Scot and hence the only one with real skin in the game. I was afforded a place of honor. I sat down, faced the TV, and sure enough, there was the Scottish team lined up beside the Brazilians, Flower of Scotland playing in the Estadio Benito Villamarin in the town of Seville. I took a swig of my beer, then another.

I started singing along to the Scottish anthem, quietly, to myself, or so I thought. My comrades in arms were all staring at me, some were laughing. Apparently, I wasn’t singing quietly enough.

Surreal? I’ll say. Here I was, a true-born Scot doing the most natural thing in the world, sitting down watching the footie with a beer, singing along to our national anthem, anticipating a small miracle, where Scotland would score a victory over the legendary Brazilians. Only, in the bizarre reality that had become my life, here I was now an Israeli paratrooper, fresh from the battlefield, dressed in combat fatigues, carrying my special issue, short Galil assault rifle, sitting among my Israeli comrades in arms, in the middle of a warzone, watching Scotland play Brazil in the World Cup.

The game hadn’t started, yet I was already taking abuse from just about everyone. When it comes to football, who doesn’t love Brazil? And Israelis are no exception. They were teasing me about how the Brazilians were going to do to Scotland what we were doing to the Syrians and the Palestinian fighters. It seemed funny at the time. My Scottish roots and Caledonian pride emerged from within. First off, I put them all in their place by pointing out the fact that at least Scotland had reached the finals. Where the hell was Israel? Too busy fighting this war I reckon. It seems Israel is much better at warfare than we are at football. Of course, that didn’t shut them up. But not to be discouraged I stood my ground and told all who would listen, to prepare for an upset.

The referee blew his whistle and the game kicked off. The picture was surprisingly clear, and we were all quickly immersed in the game. We could have been anywhere. We just happened to be situated in a clearing in a forest about ten kilometers south of Beirut, where we were at war and had been fighting furiously, only a day or so previously, and would be fighting once again in another day or so.

But this was World Cup football, and football didn’t get any better than this. Scotland were playing Brazil, the greatest football team in the world, and in this particular instance, perhaps the best team never to win the World Cup. They would go on to be defeated in the final by Italy. Anyway, for now, I had reverted from Israeli paratrooper to the boy from Glasgow, cheering on his national team in the fucking World Cup. “Come on Scotland!”

And then it happened… In the 18th minute, a bullet, no pun intended, from the right foot of David Narey from the edge of the box, about twenty yards or so, flew past Waldir Peres, into the roof of the net. Scotland were 1-0 up. We were beating the greatest team in the world! Instinctively I jumped up and screamed “Yes! Fucking Yes.” I totally lost it and began swearing at everyone who had been winding me up, fuck you all, fuck Brazil, fucking magic. Like a man possessed, I was dancing and screaming. I continued cursing everyone around me, all the “Brazil” supporters. “See, see I told you, I fucking told you, this is Scotland! Brazil, who the fuck are Brazil? Come on Scotland.” They all looked at me as if I was crazy, but all the same, even if somewhat grudgingly, they were enjoying my little rant and my display of Scottish passion.

I paid no attention at all to the fact that many of those I was cursing were officers and commanders, my officers and my commanders, including the Deputy Battalion commander and of course Hazazi himself.

I am still amazed to this day that, in the midst of a war, with all the chaos and craziness he had to contend with, that wonderful son of a bitch had the presence of mind and cared enough to remember he had a soldier in his battalion who was born in Scotland and felt it important to make sure that he would see this game. Even now, forty years on, it is hard to express how much that one act meant to me at the time and how it has stayed with me all those years.

Eventually, I calmed down. I sat and watched the rest of the game with the rest of them. Obviously, my joy was short-lived, as apparently, the Narey goal had only served to annoy the Brazilians, who went on to dominate the game and provide a masterclass in football. A superb free-kick from Zico in the first half leveled the score, followed by second-half goals from the head of Oscar, a superb shot from Eder, over the head of the Scottish goalkeeper, Alan Rough, and in the 87th minute a goal from Falcao, to seal the 4-1 victory for the Brazilians.

I took some abuse, but I had had my moment. Indeed, I had had one of the most memorable, albeit surreal experiences of my young life. The game was over. My team had been well beaten and my resurgent Scottish pride had been somewhat dented, but it was all good. I went up to Hazazi and thanked him. I could not believe he had done that just for me. It is one of the kindest and most thoughtful acts, one of the nicest things anyone has ever done for me. How wrong one can be about a person.

Hazazi looked at me, smiled, then nodded. Without a word, the message was clear. I headed back to my platoon. It was time to get my head back in the game, or back to the war. There was a lot of fighting still to be done.

About the Author
Born and raised in Glasgow, Scotland, Gary Cohen is a writer, filmmaker and creative professional, based in Israel.
Related Topics
Related Posts
Comments 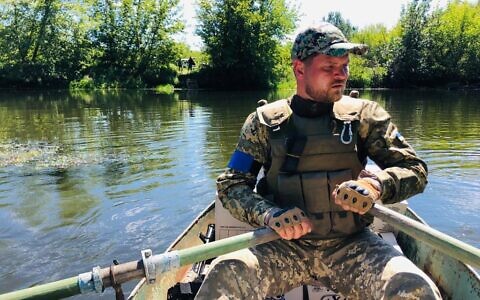 For Ukrainian village cut off by river and Russians, deliverance is a rusty rowboat
Lazar Berman 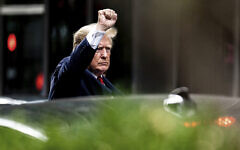