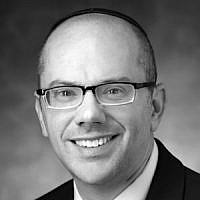 The Blogs
Ira Rabin
Apply for a Blog
Advertisement
Please note that the posts on The Blogs are contributed by third parties. The opinions, facts and any media content in them are presented solely by the authors, and neither The Times of Israel nor its partners assume any responsibility for them. Please contact us in case of abuse. In case of abuse,
Report this post.

The Arba Leshonot G’ulah, the 4 expressions of redemption given by G-d to Moshe, serve as the catalyst for Yitziat Mitzrayim, the exodus. As our children will soon remind us, they are one of the many reasons we drink four cups of wine at the Seder. And then of course the fifth expression of redemption, v’heveti, is one of hope and anticipation of the redemption to come, for all of us to ponder as the kos shel Eliyahu, the cup of Elijah, is filled at the Seder. This long awaited message of redemption was what Moshe was to bring to Jewish slaves in Egypt, the wake-up call that hope, the proverbial light at the end of the tunnel, was finally in sight.

And it was met with a resounding thud.

Moshe immediately coveys Hashem’s message to the Jewish people, but as the pasuk, or verse, says “V’lo shamu el Moshe m’kotzer ruach u’m’avodah kasha”- The Jews did not listen to Moshe because of a stunted spirit, and hard work.  Though avodah kasha implies hard physical work, the sages are more nuanced in their interpretation of kotzer ruach. Rashi calls it a shortness of breath- a form of exhaustion perhaps.  Sforno describes it more as a lack of spirit or hope, while the Ramban interprets Kotzer Ruach as Tzaar, a form of distress or anguish.  While the exact meaning of kotzer ruach can be debated, one common denominator seems to emerge among all of them. Unlike the physical nature of avodah kasha, kotzer ruach implies a roadblock which is more mental and emotional.  Rabbi Brahm Weinberg, Moreh D’asrah of the Kemp Mill Synagogue used this theme of kotzer ruach several weeks ago to deliver a beautiful and poignant D’var Torah to raise awareness of mental illness in our communities.

Hopelessness, despair, and even physical symptoms like dyspnea (shortness of breath) and exhaustion are some of the most common symptoms reported by those with mental health disorders like anxiety and depression. It is interesting to note that though the Jews’ harsh physical labor is documented early in Parshat Shmot, long before any mental or emotional damage is mentioned (we were still dressing and talking like Jews and using Hebrew names according to the sages at that point,) by the time Moshe delivers the message of the Leshonot Geulah, it is the kotzer ruach, the mental and emotional symptoms that are mentioned first, in essence becoming the driver of the suffering felt in Egypt.

I think the link between work- related stress and mental and emotional well being is something to which many in the professional Orthodox world can easily relate. In many cases checking the Smartphone is the new Modeh Ani. I have heard many Orthodox professionals lament that they are not responding to, let alone checking email over Shabbat while many of their colleagues are. And Kal Vachomer, how much more so, over the dreaded three day Yom Tov.  Out of pocket and off the grid for three days? Unheard of in today’s professional culture. The pressure on Orthodox breadwinners to sustain a household with tuition costs in the tens of thousands of dollars, even modest homes in Orthodox neighborhoods, summer camps, life cycle events, or a holiday like Pesach with matzah at twenty something dollars a pound is worse than ever before. And this pressure is destroying the Orthodox work life balance in many cases.  Our modern day avodah kasha– rarely disengaging from work is causing its own kotzer ruach in our communities.  Stress, be it from the workplace, financial, or both is taking its toll.  Manifestations of anxiety and depression- despair, hopelessness, sleep disturbances, poor concentration, anhedonia- the inability to enjoy things, and even substance abuse rates are rising, but still rarely talked about in our communities. For many it isn’t just a funk, but rather a form of slavery that can be life altering and even life threatening.

It is interesting that as the makot or plagues rained down on the Egyptians, Pharoh and the Egyptians suffered the worst symptom that can afflict anyone with any medical or psychiatric condition- denial. Pharoh repeatedly hardens his heart (kvad lev) and during makat bechorot, the plague of the first-born, we are told “ki ain bayit asher ain sham met”- no house was spared from death. Rashi comments that those homes without a first-born male were in denial and thought they would be spared. They weren’t. No one was immune. But on top of that “ki ain bayit asher ein sham met” I think has a deeper meaning. We all have skeletons in our closets, chinks in our armor. None of us is immune. We are all potentially susceptible to anything including any physical or mental illness.

In my more than fifteen years of practicing hospital based internal medicine I have had fellow Orthodox Jews ask me countless times for names or referrals to every medical specialty (including for deeply personal and intimate issues) except for one. Psychiatry (including psychotherapy.) This could mean two things. 1) People are seeking mental health care on their own but too ashamed to inquire about or admit it like they would any other ailment. 2) People are kvad lev, in denial that they need a mental health professional. In either case we have to break both of these stigmas otherwise we risk someone, G-d forbid, losing a job, a marriage, or even a life.

As we enter the Pesach season, somehow in between late night and early morning emails and other work we will take inventory of, and thoroughly cleanse our homes. Let us also take the time to take an honest inventory of ourselves, both physically and mentally. For some of us the balance may be just right. For some, maybe we just need to turn off the phone in shul during the week, during quiet Torah study, and during family meals. For others maybe some prescriptive mindfulness or meditation may do the trick. But for those who really find themselves suffering from kotzer ruach or who believe it can’t happen to them, please check that kvad lev at door, and remember ki ain bayit asher ein sham met. No one is immune. Seek help without shame. The bondage of mental illness is real. But so too can be the redemption.

About the Author
Ira Rabin is from Silver Spring, MD. He is a board certified internist who has practiced as a hospitalist for several years. He currently serves as Vice President of Medical Operations at MedStar Washington Hospital Center in Washington, DC. He has a Semicha from Rav Aharon Ziegler/Kollel Aduath Achim.
Related Topics
Related Posts
Ira Rabin
Comments