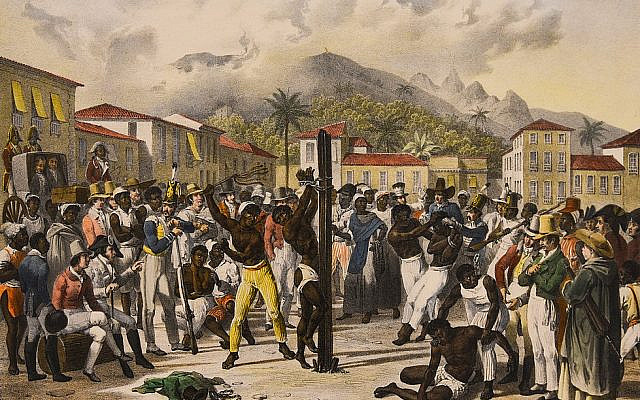 Public flogging of a slave in 19th-century Brazil, by Johann Moritz Rugendas (Wikipedia)

The first thing that strikes you when you enter the Maison des Esclaves, the “House of Slaves” Museum on the Island of Goree is how empty it is.

Over the course of 400 years an estimated 20 million Africans were captured from their homes and shipped to the New World to be sold into slavery. Families were destroyed, cultures and traditions were decimated.

Throughout this time Senegal was one of the centers of the slave trade and the Island of Goree was one of the main ports of departure for Senegalese slaves. It is estimated that hundreds of thousands of slaves passed through Goree Island and today they are commemorated in the House of Slaves Museum.

The House of Slaves Museum (Wikipedia)

This Museum is in some ways the African equivalent of Yad Vashem in Israel, or the Holocaust Museum in America. It is the central monument that commemorates the long and brutal history of African imprisonment and slavery, and it has become an important tourist destination visited by thousands of people each year.

You would think that like Yad Vashem, the House of Slaves’ museum would be filled with artifacts from the slave trade. Perhaps you would find one of the branding irons that were used to mark slaves as the personal property of their masters? Perhaps you would find the chains used to bind the slaves as they were forced on to ships leaving the continent of Africa, never to return again. Yet, the museum is empty. Visitors silently walk through the empty cells, imagining what they must have looked like when they were filled with terrified captive women and children waiting to be sold to slavery. It is not clear why there are no displays in the museum. Perhaps it is because of the general poverty in Senegal, or the museum’s inability to acquire such items. Perhaps there are no artifacts left to put on display.

The most powerful part of the museum is the “Door of No Return,” a door that opens out onto the Atlantic Ocean. A guide at the museum explains that slaves left through that door never to return to Africa alive. Standing at this door, I was reminded of my how it felt to stand outside of the gates of Auschwitz. This was a place that people did not return from. Unimaginable pain and sorrow passed through these doors. 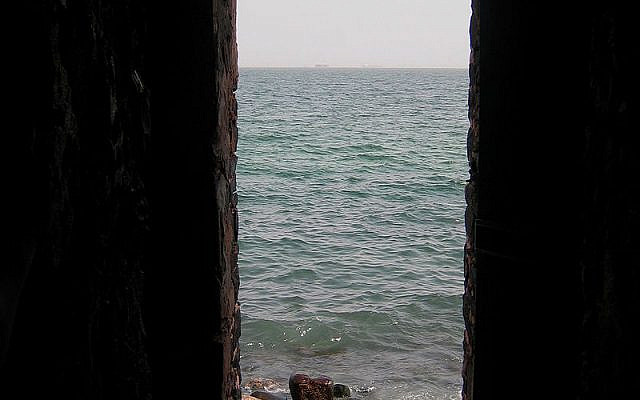 View from the Door of No Return (Wikipedia)

With my tour of the Goree Island in mind I looked at the beginning of the book of Exodus, which describes the enslavement of the Jewish people in Egypt. These are some of the chapters that I know the best in the entire Torah because I read them at my bar mitzvah. Nevertheless, I was surprised to discover something new that I had never realized before: there is barely any description of what slavery was actually like for the Jewish people in Egypt. With the exception of learning that the Jewish people were forced to do hard labor and build the cities of Pitom and Ramses, we do not find out what that labor looked like, how it felt, or how many people died in these horrid conditions.

I was most surprised when I examined Pharaoh’s decree to throw all the male children in the Nile. The Torah tells us, “Pharaoh commanded all his people, saying, “Every boy who is born you shall throw into the Nile, but let every girl live” (Exodus 2:22). Immediately after Pharaoh’s command we learn of the miraculous birth of Moses and how his mother, despite Pharaoh’s decree, managed to save him from being thrown in the Nile.

I found myself wondering: How many children were thrown in the Nile? What did the Nile look like with all of those children in it? How did the Jewish people react when their children were taken from them and murdered before their eyes? The Torah doesn’t tell us, so we will never know. However, in a book titled “Facts about Slavery” (from a publishing house in Goree itself), I found a description by the French governor in the 1870s, of the waters around Dakar. He wrote:

“At the moment, the air of Senegal is at its worst. Imagine that we smell from our bedrooms… the smell of corpses of the captives who die in their dozens in the dungeons and which the traders, in order to economize, throw in the water with cannonballs attached to their feet. The cannonballs eventually detach themselves, the bodies float between the currents and end up on the shore in places that one can reach neither on foot nor by boat; they remain among the mango trees and gradually rot.”

Was this what Egypt looked like at the time of Moses’ birth? Perhaps. We will never know. Yet I continued to question why? Why isn’t the Torah more invested in explaining in great detail the suffering of the slaves?

I think that the answer is that Torah is trying to teach us to not focus on suffering and pain. The Torah is invested in healing and redemption. That is why after telling us about Pharaoh’s evil edict to kill the baby boys, the Torah immediately jumps to telling us about the miracle child, Moses, who survived Pharaoh’s decree. When we hear about an Egyptian man beating a Hebrew slave, we are immediately told about Moses saving the Hebrew man’s life. The story of the Jewish slavery in Egypt is actually an account of their redemption, not a description of their pain.

Nachmanides (a 13th-century Spanish rabbi) in his introduction to the book of Exodus, claims that Jewish people were not fully redeemed from their slavery when they left the bondage of Egypt. They were not even fully redeemed when they received the Torah at Mt. Sinai. Rather, their redemption came at the very end of the book of Exodus when the People of Israel established a fair and just society for all. Only then can they build Tabernacle, a tent for God who is able to reside in their midst.