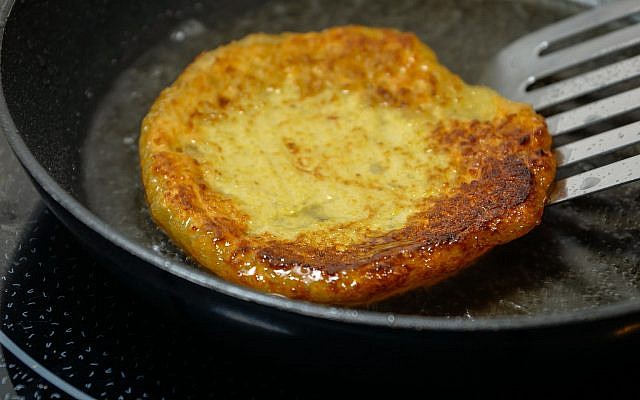 I get it. Children of Holocaust survivors are hyperaware and hypervigilant when it comes to anti-Semitism, and the execrable rise of anti-Semitism in the United States triggers all Jews. But when even the Leftist members of my children of survivors social media forums started sharing Ira Stoll’s piece for the uber-Right Algemeiner website, Fried Potatoes Are Deadly, New York Times Warns as Hanukkah Nears, I decided it was time to address this week-old lukewarm-potato.

Stoll took issue with the New York Times’ publishing of You Don’t Want Fries With That one week before Hanukkah without mentioning Hanukka or that latkes, or potato pancakes, are a traditional Hanukkah dish.

“A newspaper once edited by Jews such as Abe Rosenthal, Max Frankel, and Joe Lelyveld, and once owned by the Ochs-Sulzberger family that had Jewish origins, now writes about fried potatoes the week before Hanukkah and discusses as possible toppings ‘ketchup’ and ‘mayonnaise’ and ‘aioli’ — without even a nod to time-honored latke accompaniments such as applesauce or sour cream or brisket juice,” writes Stoll, before noting that he emailed Christopher Mele, the author of the NYT piece, about this oversight, but did not receive a response.

Before I even get into the elephant-in-the-room question — brisket juice??? — let’s talk for one brief moment about the dog-whistle inherent in Stoll’s attack on a health piece warning against the dangers of eating French fries at this or any time of year.

Despite Mele’s arguable warnings about the high glycemic index of potatoes, if you do the math in Mele’s article you conclude that the average American eats a whopping 78 pounds a year of French fries, potato chips and “other frozen or processed potato products.”

That’s all Americans – not just the two percent who are identified Jews. Mele would be justified in saying that the consumption of latkes on Hanukkah by non-assimilated Jews who actually celebrate this way are small potatoes.

Yes, the timing of Mele’s article may not have been a coincidence. But even hinting that this is a slight or even worse — veiled anti-Semitism — is like Woody Allen’s quote in Annie Hall: “You know, I was having lunch with some guys from NBC, so I said, ‘Did you eat yet or what?’ And Tom Christie said, ‘No, JEW?’ Not ‘Did you?’…JEW eat? JEW? You get it? JEW eat?”

Next thing you know someone will suggest that Mele is embroiled in a nefarious plot with the folks at Dunkin’ Donuts to grab the potato industry’s Hanukkah share.

You could view Mele’s omission of latkes as an affront or as a thoughtful and generous avoidance of raining on our Hannukah parade.

You could say that Stoll’s blog was somewhat tongue in cheek, though his sober and quasi-scientific questions regarding the NYT’s citing of research suggests that he wasn’t kidding. And neither am I.

Stoll’s focus on the NYT’s ill-timed and questionably-conceived attack on the humble yet delicious potato cheapens the recent spate of anti-Semitic attacks in the United States and in other parts of the world.

Why not question the New York Times’ coverage of missile attacks on the Gaza border or applaud the New York Times’ acknowledgement of Hanukkah and the recent rise of anti-Semitism in Luis Ferre-Sadurni’s comprehensive piece about the menorah lighting in Midtown?

No lack of Right and Left-wing anti-Semites are more than happy to accuse Jews of “paranoid whining” about swastikas on American synagogues and the 11 lives lost at the Pittsburgh Tree of Life – Or L’Simcha Congregation.

Should we give them the Hanukkah gift embodied in sharing Stoll’s blog about small potatoes?