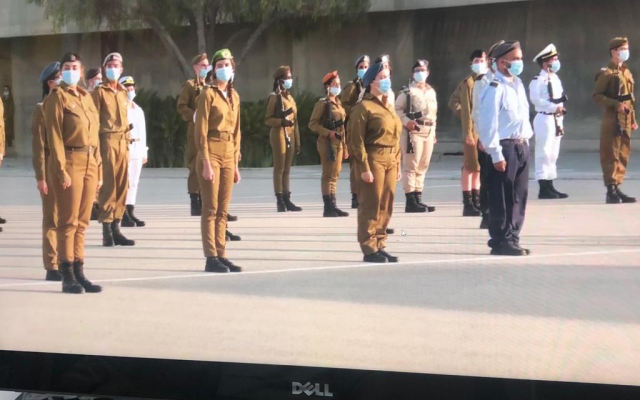 A snapshot of the Zoom ceremony that was streamed on the IDF website. (courtesy)

“You are invited to watch the ceremony to mark the graduation of the soldiers who have completed the Officers’ Training Course.” That was the text of the official invitation emailed to me and other family members by one of our granddaughters, whose sister was one of the soldiers concerned. We were informed that we would be able to watch the ceremony live, as filmed by the IDF’s official photographer, on the official IDF site on the internet.

I’ve attended such occasions in person in the past, both for my own children and for some of my grandchildren, and usually these are very dignified and moving events, filling the assembled relatives with pride and joy, and maybe even a tiny bit of trepidation. The IDF does its best to make the soldiers’ relatives – including parents, siblings, grandparents, aunts and uncles, and even cousins – welcome in the base where these courses are held somewhere in Israel.

But this was a totally new experience for me (and I expect for many others involved). First, of all, it involved making sure we were sitting in front of our computers on the appointed day at the requisite time, and that we had the link that gave access to the live telecast. Once the inevitable initial technical difficulties had been overcome, we settled down to watch.

I’ll admit, it was a shock to see all our lovely young soldiers standing on the parade ground in serried ranks – all wearing face masks. My heart bled for the poor youngsters standing in the heat, all maintaining appropriate distance from one another, and all with their mouths and noses covered. I tend to get teary at the best of times on such occasions, but this time my tears flowed freely as I sat there in my comfortable study watching the ceremony proceed in the customary fashion, but with such a great difference (my eyes are damp even now as I write this).

The IDF’s Attorney in Chief, Colonel Inbal de-Paz, who was accompanied by the commander of the base, reviewed the graduating class and gave an impressive speech equating the contribution made by the IDF to helping the general population during the current Coronavirus crisis to its contribution some seventy years earlier. Then, at the urging of Prime Minister David Ben-Gurion, the IDF rallied to help the new immigrants whose accommodation was not suited to the inclement winter weather. I was especially touched to hear him congratulate the relatives of the soldiers watching from their homes as well as the soldiers on the parade ground.

Officers’ insignia were awarded first to the outstanding cadets and then to all the soldiers. The IDF military band played stirring music, and the ceremony came to an end.

This, too, was unlike the conclusion of any previous ceremony I have seen. No hats were thrown up in the air. No rousing cheers were heard. As admonished by their commander, there were no mutual congratulatory hugs and kisses among the young people or from excited relatives. I felt sad to see this thrilling moment damped down in such a low-key fashion, but I’m sure that all those involved were happy that their achievement had been acknowledged.

And my husband and I went and had a celebratory drink to our granddaughter’s health.